What Would JFK Have Done? Counterfactual History Comes to a Cinema Near You 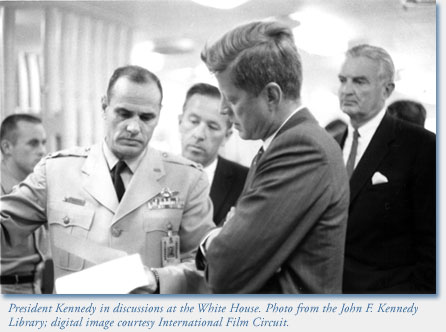 Counterfactual history—the “What If” calculations from the spreadsheets of the past—is seen as a mere parlor game by many historians. Some are occasionally willing to use it as helpful pedagogic tool. To some others virtual history—as it is confusingly called sometimes, especially by those to whom it is not a game but who do not want the taint of being counterfactual—is an important methodological innovation that facilitates explorations of historic causation, and allows historians to give primacy to the contingent against the deterministic (for a useful discussion of the issues, see Martin Bunzl’s forum essay, “Counterfactual History: A User’s Guide,” in the AHR of June 2004).

Now the philosophical and historiographic “What If?” questions are given an unusual cinematic treatment in Virtual JFK: Vietnam if Kennedy Had Lived, an 80-minute film that raises and tries to answer the question, “What would President John F. Kennedy have done in Vietnam if he had not been assassinated in 1963 and had been re-elected in 1964?” The film, which has already been shown in several venues and was the official selection at many international film festivals, has been well received by journalists (details can be found at www.virtualjfk.com).

Created by scholars at Brown University’s Watson Institute for International Studies, Virtual JFK combines archival footage from Kennedy press conferences, audio recordings, in-depth interviews, and a close reading of the documentary record, to consider both the more general question whether it matters who is in the White House to determine the courses of war and peace, and the more particular one concerning the imagined scenario of Kennedy having a second term. Closely examining Kennedy’s responses to various crises during his presidency—the Cuban Missile Crisis, the erection of the Berlin Wall, the crisis in Laos, and so on—the filmmakers argue, as Peter Almond, one of the film’s producers, put it in an interview on Canadian TV, that Kennedy’s “impulse was to manage crises away from the possibility of real military confrontation.”

The film is attracting attention partly because of its topical resonances. Even though it does not mention Iraq, Maureen M. Hart wrote in the Chicago Tribune, “there’s no avoiding it as Kennedy asserts during the Bay of Pigs crisis that to attack Cuba, a country that hadn’t attacked the United States, would be contrary to our national tradition. History and current events collide, and the answer to the filmmakers’ question is perfectly clear.”

Virtual JFK: Vietnam if Kennedy Had Lived may thus be of interest not only to proponents of counterfactual history but also to teachers who want to discuss in the classroom the role of the individual in shaping history.

The film was directed, photographed, and edited by Koji Masutani, who has trained with cinematographer Christopher Doyle. Masutani, who is currently a visiting fellow at the Watson Institute, was also a coproducer of the film, along with Peter Almond, James G. Blight, and janet M. Lang, and David A. Welch.

Almond, who works for Beacon Pictures, had earlier produced—along with Kevin Costner and Armyan Bernstein—Thirteen Days, a film about the Cuban Missile Crisis, is now working on A Little War of Our Own to be directed by Costner. Blight, who narrates Virtual JFK, is professor of international studies at the Watson Institute and served as principal substantive adviser to Errol Morris during the production of The Fog of War, the biopic about Robert McNamara that won the 2004 Oscar for best documentary. Lang is adjunct associate professor of international relations at the Watson Institute, where she is also codirector (with Blight) of the institute’s Critical Oral History Project. Welch is professor of political science at the University of Toronto.

Blight and Lang have coauthored, along with Welch, Vietnam if Kennedy Had Lived: Virtual JFK, a companion book for the film, which has just been published by Rowman and Littlefield. The book contains excerpts from documents, transcripts of discussions by the principals and by historians, and the analyses of the authors.

—PS (Based on material from the filmmakers)