Some 40 years ago, two scholars, Ted Nelson and Henri Lefebvre, laid out important ideas that, then seemingly unrelated, today mesh in ways that offer intriguing possibilities for the study of cities. Nelson’s may be less familiar to historians despite the fact that most of us engage daily with hypertext, a word he coined in 1963 and published on in 1965.1 Nearly a decade later, in Computer Lib / Dream Machines, he made and illustrated a statement that has come to be widely quoted and is particularly relevant for what follows: “All things are intertwingled.”2 His graphic contained 12 rectangles joined by lines that provided alternative paths from one rectangle to another. Not only did the image represent how hypertexts could and did work, it also reflected his conviction that simple, linear narratives failed to capture the complex “intertwingled” nature of the world.

During the same years, French sociologist Henri Lefebvre wrote and published his magisterial La production de l’espace.3 In it, he presented a complex, multifaceted discussion of urban space that has profoundly shaped subsequent urban scholarship. Seeing urban space as a complex social construction that affected social practices and perceptions, Lefebvre joined the conceived, perceived, and lived spaces of cities to their pasts and the stages of capitalism in which they were developed and redeveloped to demonstrate how the social production of urban space is fundamental to the reproduction of society.

The fall of 1993 was an exciting time for me as an urban historian to arrive in Los Angeles. After a long period of relative neglect, urban scholars had begun to turn their attention to L.A. Post-1965 immigration had transformed it into one of the world’s most diverse cities. The 1992 disorders there had focused the world’s gaze on its problems. Although the movie industry had long let the city claim global city status, its new prominence, population, and location on the Pacific Rim added credibility to that claim. An “L.A. School” of urban scholarship that drew heavily on the scholarship of Lefebvre was emerging, a school that argued for Los Angeles’ role as the archetypal American city of the 21st century, much as Chicago had claimed that position in the 20th. Space was one of the markers of distinction between the two. Unlike Chicago, which Ernest Burgess had mapped as being pushed relentlessly outward from its downtown, Los Angeles was a post-modern city of malleable and changing spaces in which nodes of all kinds were networked together by individuals, institutions, technologies, and, of course, freeways.4

It was also an exciting time to arrive at UCLA, an early institutional player in the creation of the internet. That spring, CERN had made its World Wide Web technology freely available to the world. Months earlier, Mosaic had also released a version of its software that made browsing the web open to all. Although the impact of those two developments was still barely imaginable, the possibilities associated with that emerging hypertext environment seized the imagination of many, including some who saw an interesting convergence between new articulations of urban space and the intertwingled relationships of hypertext.

The Encyclopedia of Chicago

It was in that heady intellectual environment that the Newberry Library submitted a proposal to the NEH for an Encyclopedia of Chicago with James R. Grossman, Ann Durkin Keating, and me as editors.5 The Encyclopedia we proposed would not only be a reference book that captured what was known about Chicago and its past. It would also be a collection of different types of entries that used the most recent scholarship on other cities including Los Angeles to ask new questions about Chicago. The geographic scope of the project would extend beyond the city’s boundaries to the entire metropolitan region and beyond, and authors would be encouraged to take a metropolitan view in writing their entries. Our cartographic editor, Michael Conzen, would develop a series of new maps that would visualize the spaces of the city in exciting new ways. Finally, though its primary product would be a print volume published by the University of Chicago Press, the Encyclopedia of Chicago would also involve some kind of digital product (www.encyclopedia.chicagohistory.org).

From its beginning, then, the Encyclopedia of Chicago proved to be an excellent platform for exploring both the ideas of Lefebvre and Nelson as well as their relevance for each other and for the study of cities. The inherently hypertextual format of an encyclopedia with entries linked by "see also" references opened new possibilities for constructing the table of contents. Where and how would the details of Chicago’s past and present best be told in ways that let readers find the information they wanted and encouraged them to explore other social, conceptual, and physical spaces of the city? How could the authored entries and their contents be enhanced with images, maps, tables, timelines, and other features that could be implemented in a book and in cyberspace? A thorough explanation of the ways we answered those questions is readily available elsewhere. 6 Suffice it to say in the limited space here that, with the assistance of our editorial board, authors, researchers, designers at the University of Chicago Press and Northwestern University, and the staffs at the Newberry Library and the Chicago Historical Museum, the Encyclopedia of Chicago engaged the possibilities for “intertwingling” implicit in hypertext to create a rich resource for studying Chicago and other cities in both a print and a web-based format.

The scholarship embedded in the Encyclopedia also contributed substantially to clarifying my own questions regarding the ways in which urban space was understood by the Chicago School and the Los Angeles School.7 Were they and the cities on which they were modeled as distinct as was claimed or did Los Angeles and Chicago share a much more common social and spatial history? My own work on Chicago’s Pullman region from the 1880s through the 1980s suggested that the changing realities of planned, lived, and imagined spaces so central to the vision of contemporary Los Angeles were equally appropriate a century earlier in Chicago, a conclusion reinforced by many Encyclopedia entries and the conceptual links that joined them. Maps created for the Encyclopedia like the “Economic Origins of Metropolitan Chicago Communities” did the same.8

The vibrancy of those questions and observations played a prominent role in my decision to develop and coordinate a team-taught, year-long interdisciplinary course at UCLA that focused on Los Angeles.9 Issues of space would necessarily play a prominent role in that class because of the city’s physical size, its diverse population, and the growing emphasis on studying space not only in Los Angeles but in cities more generally.

Having learned much about mapping both physical and conceptual space during the encyclopedia project, I turned to two Los Angeles colleagues who had already done significant work on urban mapping to help me think about how to do the same in the class: Philip J. Ethington at USC and Todd Presner at UCLA. Phil was deep in a massive project on L.A. and its spaces and Todd had developed an impressive Berlin-based project (Hypermedia Berlin: www.berlin.ucla.edu) that combined historical maps and Google’s API into a fascinating digital teaching platform that allowed users to organize and retrieve information that could not be presented or represented on those maps alone.10

Our early conversations quickly evolved into a grant proposal to develop Hypercities—a rethinking of Hypermedia Berlin that would include historic maps of urban areas from all over the world, and important new functionalities for constructing narratives as well as locating objects in both space and time on those maps. Drawing on the expertise of UCLA and University of Virginia colleagues in archeology, classics, and architecture, the proposal for Hypercities included considerations of three dimensional representations of space. Library partners at USC and UCLA contributed design specifications for bringing objects coded for time and place into the digital spaces of Hypercities. Community partners at Public Matters and the Pilipino Workers’ Center and the design team at Remap LA in UCLA’s School of Theater, Film, and Television provided the opportunity to test the possibilities of Hypercities in public venues and on a variety of digital platforms. Finally, the wizards at UCLA’s Academic Technology Services and the Center for Digital Humanities made sure our imaginations were kept in check by digital realities.

We submitted a proposal to the HASTAC/MacArthur Digital Media and Learning Competition, who saw possibilities in it and awarded us funding to work on Hypercities. Work is still underway, but an early version of Hypercities is available on the web at www.hypercities.com and demonstrates some of the basic functionality of the platform. What is not yet publicly accessible (but will be soon) is the ability to construct those narratives and connect them to the spaces visible on those historical maps. When it is, it should be possible for almost anyone to bring together the spatial and the conceptual analysis of cities that the encyclopedia team could only tentatively attempt when we tried to bring the scholarship behind the print maps to the reader in the online version’s “rich maps.” 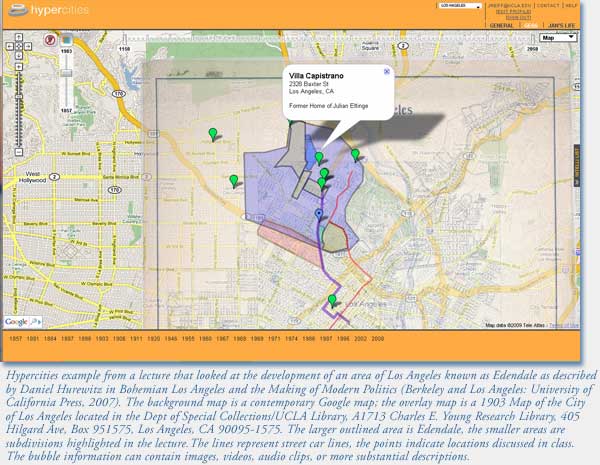 As the Hypercities programming team works toward those implementations, several of us are experimenting with the relationship between the kinds of interpretive narratives that Hypercities will enable and their relationship to the spatial and temporal that can be displayed on its maps. Currently, a seminar I am teaching at UCLA is working with students from Historic Filipinotown creating a tour of that recently designated Los Angeles historic district. The tour can be taken physically while walking through the neighborhood accompanied by a Nokia tablet that provides additional digital content. Or it can be taken virtually by accessing those physical sites and the associated content via Hypercities.

My ultimate goal is to combine the two ideas and two projects in the two cities that have so shaped my questions about cities more generally. I envision team-teaching a course on Los Angeles and Chicago in which students located in both cities explore their conceived, perceived, and imagined spaces sharing a digital platform like Hypercities. My own writing about those questions will almost certainly also take greater advantage of these digital and hybrid environments that nearly 40 years ago seemed unrelated and even unimaginable.

—Janice L. Reiff is associate professor of history at the University of California at Los Angeles

5. A complete list of funders for both versions is available online at www.encyclopedia.chicagohistory.org/pages/700002.html.

9. A description of this and other Freshman Cluster classes at UCLA is available at www.college.ucla.edu/ge/clusters.

10. Ethington’s early digital publication for the American Historical Review is available at www.usc.edu/dept/LAS/history/historylab/LAPUHK.