The Digital Durham Project at Duke University is an initiative that uses new technology to preserve, explore, and build on the history of the old tobacco town of Durham, North Carolina, and its peoples. The project makes a large range of material widely available and serendipitously brings together the university and the Durham community, undergraduate students, and middle-school students, over shared interests in the history of our community and the use of new technology to research the past. The project’s web site serves visitors from Durham, North Carolina, the United States, and across the world. Scholars, students, and the general public mine the site for source materials that illuminate the experience of industrialization, immigration, segregation, and urbanization in the post-Civil War South.

Durham, North Carolina has become associated with tobacco, medicine, and baseball. Much of the city’s public image comes from the Bull Durham Tobacco that originated here in the 19th century and the Durham Bulls, our minor league baseball team. If you were to sit behind the right-field dugout at the new Durham Bulls Ballpark and gaze across the infield to the bleachers on the opposite side, you would notice an empty concrete surface that is sometimes filled with games and amusements for children. Recently, this stretch of ground has drawn my attention. In working with Sanborn fire insurance maps from the late 19th century and the web application Google Earth, I have found that these ballpark amusements sit on the same piece of ground where African American children attended Durham’s first “colored” graded school in the late 1880s.

Following up on these findings, Duke students in my research seminar unearthed newspaper accounts about some of the early graduates from the “Colored Graded School” and discovered manuscript letters of the school’s founding principal, James A. Whitted.

This is just a small example of the kind of discoveries that students are making through the Digital Durham Project, which began in 1999, when I received an incentive grant from the Center for Instructional Technology (CIT) at Duke. The CIT funding enabled me to create a web resource that featured population census data from 1880, a contemporaneous map, and a few other primary documents. Subsequent funding from the CIT and the vice provost of undergraduate education lead to the creation of a beta web site, which I then used as a resource in my undergraduate research course on Durham and the New South. In 2005, I used an NC ECHO (Exploring Cultural Heritage Online) grant from the State Library of North Carolina to revamp the site’s architecture and expand its holdings by 1,000 images. This site can be accessed at www.digitaldurham.duke.edu.

The site has become a cornerstone of my undergraduate research service-learning seminar called “Digital Durham and the New South.” In this seminar, Duke students select their own research topics, identify primary materials that they can use to substantiate their investigation, and then work to produce an original research paper. The web site gives students a deep sense of the range of materials—printed sources, ephemera, manuscript letters, business ledgers, government records like census data and wills—that might contribute to their investigations. Despite its breadth, the web site provides insufficient materials to support semester-long research pieces on most topics, thus students move from the digitized sources on the web in search of analog materials at the Rare Book, Manuscript, and Special Collections Library at Duke and the Wilson Special Collections Library at the University of North Carolina at Chapel Hill. The “audio” link on Digital Durham offers visitors short “audio postcards” that students have crafted in their own voices. The “Teachers’ Corner” offers a model lesson plan developed by Jason Koslofsky, an undergraduate who researched the origins of Durham's first graded school for white pupils.

Two students interested in educational opportunities afforded black children in late 19th-century Durham have used census data on school attendance as a springboard into more detailed discussions about the founding of the Colored Graded School in Durham. One first-year student, Charisma Nelson, searched newspaper microfilm for stories in Durham papers from the 1880s of the Colored Graded School and its pupils. She then used census data, city directory data, and cemetery data to create profiles of the students who attended the school in the 1890s. Another undergraduate, Courtney Jamison, used manuscript letters of the school’s first principal James A. Whitted to a prominent black educator and journalist, Charles Hunter, together with Durham School Board financial records to discuss the challenges that the school’s founder faced in the late 1880s.

In addition to conducting their own original research, Duke students serve as mentors to eighth graders at Durham School of the Arts, a public magnet school near campus. We typically meet weekly with a class of eighth graders and their teacher who are studying North Carolina history. We often work in teams to investigate the experience of youth who lived in late 19th-century Durham. Education, particularly the rise of the graded school, is one of the themes in the eighth-grade social studies curriculum on industrialization.

With the guidance of their college partners, middle-school students conduct searches in the population census of 1880 on the Digital Durham web site to determine which of Durham’s youngsters had the advantages of an education. They use school attendance data together with census data on the “color” of students and the profession of fathers whose children attended school to seek correlations between education, race, and socio-economic status. Through the analysis of primary sources, students learn how exceptionally rare a school education was for youngsters in 1880s Durham. They also recognize that white youngsters were twice as likely as black or mulatto school-aged children to attend school at this time. After exploring the limited educational opportunities for youth, Duke students and their middle-school partners study the “occupation” data in the population census to determine the range of employment in which school-aged children engaged. This latter set of census searches makes an excellent introduction to the topic of child labor and the emergence of progressive reforms in the early 20th century that mandated school attendance and limited the hours during which North Carolina factories could employ children. 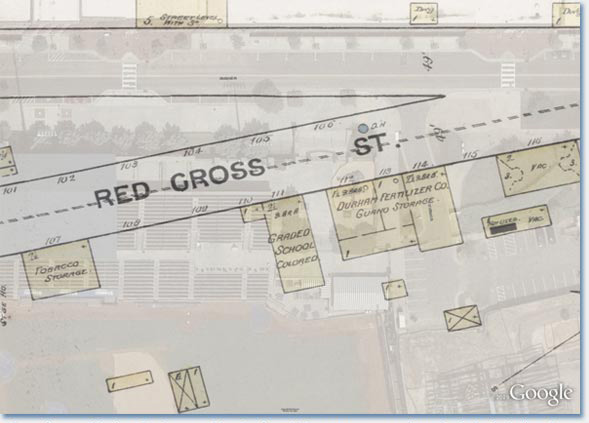 This collaborative exercise has multiple benefits for both the university and middle-school student participants. Duke students master the readings of the course with greater facility than they have in my standard history seminars (e.g. without the service-learning component). They approach the readings with more intensity, because they realize that their middle-school partners rely on them for accurate explanations of core concepts such as industrialization, segregation, or child labor. The Duke students also use their class meetings to share their research findings with their middle-school student partners. The undergraduates translate their original research projects into hands-on research exercises that build on the core themes of the state-mandated curriculum for eighth-grade social studies. Duke students get to test their new research findings and share their research and writing techniques with their middle-school partners.

This is not a one-way relationship, but a relationship built on mutual exchange. Most of the Duke undergraduates are new to North Carolina and have relatively little contact with the broader community of Durham. By working together to interpret digitized primary documents, Duke students and their mentees make shared discoveries about the history of this community. Through course readings and hands-on research activities with their middle-school partners, Duke students learn about the history of public education in North Carolina, particularly the origins of segregated schooling in Durham. In addition to gaining knowledge of our town’s history, Duke students glean information about present-day Durham and its cultural offerings from informal conversations with their eighth-grade partners.

There are pedagogical as well as social benefits to this collaborative exercise. North Carolina is one of the few states to test its eighth graders on their competencies in technology. In order to receive a high school diploma, students must demonstrate that they have passed the eighth-grade computer skills test. Current statistics from the state Department of Public Instruction suggests that there is still a significant “digital divide” between the percentages of white and black students who pass this exam in the eighth grade.

The collaborative relationship between Duke students and their eighth-grade counterparts becomes especially important in this context. Each Duke student typically works with three eighth graders to help them master complex technology skills. Duke students teach their middle-school partners how to conduct research in digitized primary documents that can be found on the Digital Durham web site and other similar web repositories. They also teach them how to manipulate population census data, create graphs using Excel and interpret the data (essential skills in mandated mathematics and technology curricula). In addition to teaching core skills like how to identify a primary document or how to cite one’s sources, Duke students also serve as role models—especially powerful models – for those middle-school students whose parents never attended college.

The Digital Durham Project can be readily replicated in other academic communities. Many university libraries have already established digitized collections of primary documents from their neighboring communities. The University of Pittsburgh offers http://digital.library.pitt.edu/pittsburgh for instance. Many of these same universities offer undergraduate research seminars in U.S. history.

My experience in working on Digital Durham these last few years has left me with the strong sense that small collaborative learning experiences grounded in local history can be transformative. I have watched my students develop their skills as researchers, and I have watched them share their skills and knowledge with their middle-school partners. This collaborative project has enabled me to work side by side with Helen McLeod, a nationally certified social studies teacher at Durham School of the Arts. For many of her middle-school students, the 19th century seems like “a thousand years ago” and their interest in that period is nonexistent. But when we make digitized 19th-century maps of Durham one of our core texts, we open up new ways of seeing, create new topics for conversation, and foster the intellectual development of adolescents who will be our next wave of college students.

—Trudi Abel is a scholar-in-residence and is the director of the Digital Durham Project at Duke University.