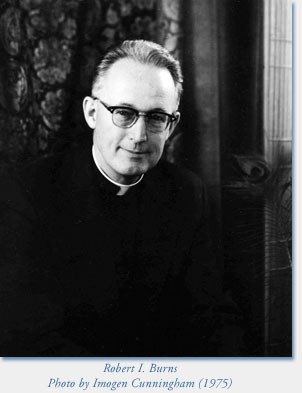 Historian of the Old World and the New: Medieval Iberia and the Pacific Northwest

On November 22, 2008, America lost one of its most noted historians, Robert I. Burns, S.J. Born on August 16, 1921, in San Francisco, California, he attended the University of San Francisco for a year before entering the Society of Jesus (popularly known as the Jesuits) in August 1940. He continued his undergraduate studies at Santa Clara University in California and at Gonzaga University in Washington (BA Honors, Classical Studies, 1945). He took his MA degree and a licentiate in philosophy in 1947 at Mount St. Michael’s School of Philosophy and Science (at Gonzaga University). During this time he served as assistant archivist at the Jesuit Historical Archives in Spokane with its outstanding collection of Amerindian materials. Here, he formulated a remarkable project that responded to Samuel Eliot Morison’s recommendation that every historian work in two fields: a modern field for its immediacy and wealth of documentation and an ancient field to promote distance and objectivity. His plan was to study two frontiers simultaneously: the Pacific Northwest of the 19th century with its epic confrontation between Indian and white, and the Christian-Islamic frontier in Mediterranean Spain with its equally epic encounter between Arago-Catalonia and Sharq al-Andalus (eastern Islamic Spain). From the beginning, the focus of his work was the oppressed “minorities”—native Americans and Spain’s Mudejars (Muslims living under their Christian conquerors)—as they contended with the advance of a colonial frontier.

After a year as instructor in history at the University of San Francisco (1947–48), he took a master’s degree in medieval history at Fordham University (1950) under Oscar Halecki. A four-year program of study at the Jesuit faculty of theology in California led to two pontifical degrees: a bachelor’s degree and a licentiate in sacred theology. During this time he was ordained in San Francisco to the Roman Catholic priesthood (1952) and subsequently spent a year of ascetical study in Florence, Italy (1954).

After nearly 20 years of teaching at the University of San Francisco, Father Burns was lured to the University of California at Los Angeles by Lynn White Jr. in 1976. While at UCLA, he established the Institute of Medieval Mediterranean Spain in Playa del Rey, California, which became a unique scholarly resource, housing an impressive library of over 7,500 books and other scholarly materials dealing with eastern Spain and the Mediterranean world of the Middle Ages. He added radiance and vitality to UCLA for the next quarter century and then as a remarkably prolific emeritus. He soldiered on until his death working on the final volume of the Diplomatarium of the Crusader Kingdom of Valencia from manuscript materials salvaged from his institute.

Father Burns’s work stands as a monument to scholarship. His publications of some 30 books (including revised in translation), more than 200 articles and chapters in books, 200 historical abstracts, and countless reviews are divided between the Old World and the New, yet they share a common focus on colonial conquest, acculturation, cultural antagonism, exploitation, and inter-group harmony. The Jesuits and the Indian Wars of the Northwest (Yale Univ. Press, 1966), a pioneering study using European and Jesuit archives to study the wars and problems of acculturation faced by the Indians of the Pacific Northwest Plateau and Rockies, represents the major output of his New World concentration. The Old World concentration is represented by a series of archives-based studies, the most important being The Crusader Kingdom of Valencia: Reconstruction on a 13th-Century Frontier, 2 vols. (Harvard Univ. Press, 1967), Islam under the Crusaders: Colonial Survival in the 13th-Century Kingdom of Valencia (Princeton Univ. Press, 1975), Medieval Colonialism: Postcrusade Exploitation of Islamic Valencia (Princeton Univ. Press, 1975), Jaume I i els valencians del segle XIII (E. Climent, 1981), Muslims, Christians and Jews in the Crusader Kingdom of Valencia: Societies in Symbiosis (Cambridge Univ. Press, 1984), Diplomatarium of the Crusader Kingdom of Valencia: The Registered Charters of its Conqueror, Jaume I, 1257–76, 4 vols. to date (Princeton Univ. Press, 1985–2007), Jews in the Notarial Culture: Latinate Jewish Wills in Mediterranean Spain, 1250–1350 (Univ. of California Press, 1996), and Negotiating Cultures: Bilingual Surrender Treaties in Muslim-Crusader Spain under James the Conqueror, with Paul E. Chevedden (E.J. Brill, 1999).

Burns’s formidable scholarship attracted honors here and abroad, including the Haskins gold medal of the Medieval Academy of America, seven national book awards, eight honorary doctorates, and from Spain the Premi Internacional Ramon Llull, the Premi Catalònia of the Institut d’Estudis Catalans, the Premi de la Crítica “Serra d’Or,” the Soci d’Honor of the Acció Cultural del Pais Valencià, and the Order of the Cross of St. George.

Like Ranke, Father Burns believed that “everything is connected,” and with an archeologist’s eye he sought to connect the scattered and fragmented pieces together to produce a faithful rendering of the past. Decades of archival search and transcription, especially in the deteriorated early paper records of the Crown of Aragon, taught him that all bits and pieces are of importance and relate to a wider whole. Father Burns will best be remembered for his collegial style and supportive grace. Grateful students and colleagues owe to him much help and inspiration. The monarch he spent a career studying, King James I the Conqueror (1208–76) of Aragon-Catalonia, believed that deeds are not to be valued for themselves but are the “works” that Scripture warns us we must perform. Scholars can be thankful that Father Burns wrought “so good a deed (tan bon feit).”