History Engine: Creating a Writing Assignment for the Digital Age

It would be hard to deny that the digital revolution has changed our classrooms. PowerPoint has changed how we present our lectures, e-mail has altered how we communicate with our students, and classroom management tools—such as Blackboard and Moodle—have revised the way we give assignments and circulate syllabi. Technology has even changed how students cheat, as online content and cell phone texting provide new avenues for plagiarism, forcing us to recalibrate how we formulate and grade assignments.

Despite all that, the digital revolution has done little to one of the central pillars of the history classroom: the short essay. Essay assignments sometimes take advantage of online primary sources but otherwise have remained untouched by the last 20 years of digital change. There are, it turns out, good reasons for that. In teaching critical thinking skills, few exercises have proven more effective than asking students to write five or ten well-reasoned pages answering a particular question. Requiring students to make sense of disparate pieces of evidence, organize their thoughts, and then defend their argument on paper pushes them to go beyond rote memorization. Essays force students to make sense of what they’ve learned in a way that few other assignments can. And you don’t need computers for that.

Yet we began to wonder if we might be missing something by asking students to write papers in the same format their predecessors did more than a generation ago. In a traditional writing assignment, for example, there are few opportunities for students to collaborate. Too often the limitations of the classroom make it unwieldy to ask students to share their papers, research, and insights with one another, even though the benefits of such sharing might be significant. In the same vein, the typical writing assignment presents few opportunities for linking together the discoveries of students with similar findings uncovered by their peers. Several students may independently produce insightful work on parallel topics—such as religion, politics, or race relations—but have no way to connect that work together or even realize they have common insights worth sharing with one another. Technology, it seemed, might offer avenues around these problems and perhaps allow us to amplify the power of the traditional essay assignment. So we began to ask ourselves: “What would a writing assignment look like in the digital age?”

We soon realized that such an assignment would tightly intertwine both traditional pedagogy and recent technology. The basic structure of the history essay, for instance, would remain the same: we would ask students to read primary and secondary sources on a topic, make sense of them, and present an argument in clear prose. Yet we would also ask those students to collect new pieces of information (metadata, really) associated with their essay that went beyond the normal requirements for such an assignment. We realized that if students collected common elements about their work, such as associated historical dates and locations, we could begin to link their writings together with related essays written by other students. Those connections, in turn, could begin a process of combining student writings into a historical portrait more comprehensive than any single undergraduate could produce. And if the entire class uploaded their work into an online database, they would be able to share their discoveries with one another in ways not otherwise possible. Thus we began experimenting with the traditional essay, attempting to employ digital tools to enhance collaborative opportunities for undergraduate research and writing.

The result of this experimentation has been the History Engine (http://historyengine.richmond.edu), a project at the University of Richmond centered on a writing assignment for the digital age, which we call an “episode.” An episode is something like a moment in time: it is a short essay on a particular event in the past, such as a wedding in New York during the Great Depression or an 1840 slave sale in rural Mississippi. Episodes explore these historical moments as interpretive windows into the past. Rather than tackling the entire American Civil War, for example, an episode might focus on the terrifying experience of a particular soldier at the Battle of Gettysburg, illustrated by his surviving letters and contextualized by secondary literature. Another episode might recount the excitement felt by a woman in New Hampshire when she stepped into the voting booth for the first time in 1920, as described in her diary and supported by literature on the 19th amendment. Because they center on historical action at the local level, each episode provides a unique voice about a particular time and place that can be joined by other voices. (For examples of episodes, please explore the History Engine’s database: http://historyengine.richmond.edu/search/basic) 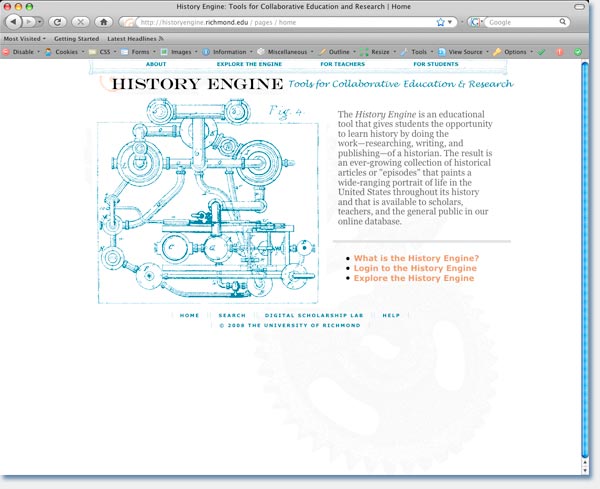 The idea behind the episode was to mimic the process of a professional historian on a scale small enough to make it accessible for undergraduates, while adding elements that would enable greater classroom collaboration and discovery. The episode assignment begins with students diving into primary sources in search of a compelling historical experience illustrated by original documents. The students then write-up that individual experience of the past and place it in historical context using secondary sources. The result is a concise piece of writing (around 500 words) that makes sense of primary and secondary sources and follows the general process a professional historian would in writing an article or book. In addition, every student is required to identify certain metadata about their episodes that can be used to index and connect them. Each episode, for example, has an associated date or date range, one or more locations where the episode occurred, tags for themes in the episode, and citation information about their sources. After students have revised their episodes and secured the approval of their instructor, they upload them into the History Engine’s database using the project’s online interface.

The History Engine and the Classroom

Once students enter their work into the History Engine, the project opens a wide range of possibilities. All episodes in the History Engine are publicly accessible online through our search and browsing tools. They are also automatically linked together through their common metadata. So, for example, an episode that occurred in Adams County, Mississippi, is linked to all other episodes that touch on that location. The same is true for episodes that share similar date ranges, thematic tags, and citations. As a result, students using the project can follow any particular topic into the numerous other episodes in the History Engine that touch that same question. If some students wanted to examine an issue that arose in the course of their research, such as migration patterns during the 19th century, they could follow that subject into the research and writing of their fellow students. Students can thus build on the work of their classmates, challenge one another, and contribute to an ever-growing collection of historical snapshots. In so doing, undergraduates are pushed to place their work within larger contexts and grapple with the ideas of their fellow students.

The current version of the History Engine evolved out of several years of experimentation and careful collaboration with teachers at a range of institutions. The original version was built at the University of Virginia (with the Virginia Center for Digital History), around a class taught by Edward L. Ayers on the American South, where we refined the idea of the “episode” and revamped the project’s online tools to match the classroom needs of Ayers and his students. We also teamed up with the National Institute for Technology and Liberal Education (NITLE) to make the project available to professors interested in experimenting with new ways to introduce undergraduates to history.

This initial group included professors at Wheaton College, Furman University, Juniata College, the University of Virginia, and Rollins College, to which we later added the University of Richmond and the University of North Carolina at Pembroke. During each semester, we found that the History Engine’s emphasis on active learning resonated with both teachers and students. As a crude measure of effectiveness, every professor who used the project during these initial phases has remained with the project and integrated it into later courses. (For more on the experience of teachers using the History Engine in the classroom, see the accompanying article by Benson, et al.)

During all this experimentation, we realized that giving students a digital writing assignment changed several dynamics. First, writing a few episodes seemed to require greater precision by undergraduates than did a single, somewhat longer essay. Because the episode’s online format demands concise writing and attentiveness to metadata questions about time and place, it pushed students into deep engagement with their primary and secondary sources. Second, the altered assignment placed new emphasis on the networks between a professor’s classroom and the university’s library and archivists whose support is indispensable to the research required for an episode (see the article by Rachel Shapiro and Kathryn Shively Meier). The project’s emphasis on collaboration, in that sense, began well before episodes entered the database. Third, we noticed that writing episodes appeared to excite students in ways we simply did not expect. For some, it was the knowledge that their work would be published online and contribute to a larger historical project. For others, it was the empowerment of interpreting original documents and “doing” history just as a professional historian would. Still others found that crystallizing, in a very few paragraphs, an argument built on primary sources provided a challenge that stimulated deeper intellectual engagement with the source material.

The History Engine is an ongoing experiment, which continues to be expanded and refined. From what we’ve learned so far, however, we believe that digital tools have the potential to expand the possibilities of traditional assignments like the essay. Without compromising the standards of rigorous argumentation, intensive work with sources, and creative prose that the best history assignments have always required, we hope to continue experimenting with what a writing assignment might become in the digital age.