More Human than Alien: Researching the History of UFOs

In the summer of 1947, private pilot Kenneth Arnold described seeing nine bright objects flying in close formation at remarkable speed near Mount Rainier in Washington. Soon after, when pressed by curious journalists, he described the strange aircraft as “flat like a pie pan and somewhat bat-shaped,” noting they “flew like a saucer would if you skipped it across water.” Though he never uttered the phrase “flying saucer,” newspapers throughout the world rapidly adopted the term. Just weeks after Arnold’s sighting, a Gallup poll revealed that nine out of ten Americans were already familiar with the moniker. Within months, the expressions “flying saucer” and “flying disk” had become not only ubiquitous, but virtually synonymous with sightings of unusual aircraft. To witness an unknown flying object in the sky meant—to many people at least—seeing a flying saucer. 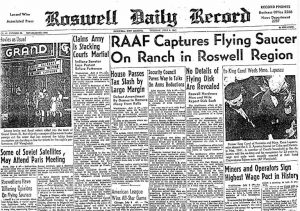 Over the next seven decades, claims of unidentified flying objects (UFOs) from outer space, encounters with aliens, and “ancient astronauts” inspired amateur research (ufology) and extraterrestrial contact support networks, government investigations, scientific and clinical research, bestselling books, news coverage, television shows, and films. Since the mid-1990s, however, interest has apparently waned. News coverage of UFOs has measurably decreased, and the ufological community has reported declining membership, the dissolution of local UFO groups, and the closing of leading periodicals and newsletters. What explains the global rise and seeming decline of UFO sightings, interest in UFOs, and the alien contact movement? What does the historical preoccupation with flying saucers and extraterrestrial visitors tell us about contemporary attitudes toward science, technology, and our status as human beings? These are some of the questions I am exploring in my study of the global history of the UFO and alien contact phenomenon. In addition to writing a book on the subject (no historian of science has written a monograph on the history of the UFO phenomenon in over 40 years), I am also collaborating with filmmaker Richard Sherman (From the Black You Make Color and No. 4 Street of Our Lady) in making a documentary film on the subject.

The Fellowship in Aerospace History sponsored by NASA and the American Historical Association has provided invaluable assistance toward completing both facets of this project. The fellowship was especially helpful in providing me with the time and resources to conduct research at several archives. At the Special Collections of the University of Arizona Library, I had the opportunity to examine the personal papers of James McDonald, a prominent American physicist, who in the 1960s became a vocal advocate of the notion that UFOs were extraterrestrial in origin. During the 1960s, McDonald spent considerable time investigating reported UFO sightings, interviewing witnesses, and analyzing data. McDonald was also a (quite critical) consultant to the Air Force-sponsored scientific commission formed to study UFOs during the years 1966–68.

The fellowship also has been instrumental in initiating work on the documentary film. Richard Sherman and I both attended the annual International UFO Congress in Arizona in February, where we listened to presentations and met with numerous attendees. Our chief focus, however, was interviewing a number of prominent ufologists and alien contact researchers, including Robert Davis, Stanton Friedman, Rosemary Ellen Guiley, and Kathleen Marden. Later this spring, we intend to travel in the northeastern United States to interview other notable figures in ufology and academia.

The preliminary results of the research I have conducted confirm my earlier hypothesis that the Cold War played a critically formative role in the creation and sustainability of the UFO and alien contact phenomenon. Archival research in particular demonstrates that the technological innovations, cultural values, political anxieties, and institutional methods characteristic of Cold War societies helped fuel interest in UFOs and extraterrestrials. The Cold War, however, has not been the sole social factor that has informed responses to reports of sightings and encounters. For instance, decolonization movements (with their criticisms of and resistance to Western visions and applications of science and technology) and second wave feminism (with its success in gaining institutional recognition of the psychological trauma experienced by victims of sexual assault) proved critical in providing ways for many to grapple with reports of alien abductions during the last third of the 20th century. And interviews with leading ufologists today reveal that the field is now being shaped and challenged by new sets of pressures ranging from what some dismiss as a growth in shameless commercialism to dire environmental threats to the planet to the hollowing out of traditional organizations through generational change and a greater reliance on digital media.

I want to extend my thanks to both the American Historical Association and NASA for giving me this invaluable opportunity.

Greg Eghigian is associate professor of modern history at Penn State University, specializing in the history of science and medicine. His research has focused primarily on understanding the ways modern science and medicine have understood and handled forms of social deviance. His most recent publications include The Routledge History of Madness and Mental Health (2017) and The Corrigible and the Incorrigible: Science, Medicine, and the Convict in 20th Century Germany (2015). He is presently conducting research for a book and a documentary film on the history of the UFO and alien contact phenomenon.

The Fellowships in Aerospace History, supported by the National Aeronautics and Space Administration (NASA), annually fund research projects from six to nine months. Proposals of advanced research in history related to all aspects of aerospace, from the earliest human interest in flight to the present, are eligible, including cultural and intellectual history, economic history, history of law and public policy, and history of science, engineering, and management. The fellowships are open to applicants who hold a doctoral degree in history or a closely related field, or who are enrolled in and have completed all course work for a doctoral degree-granting program. Preference is given to applicants in early stages of their careers. NASA provides funds to the American Historical Association, the History of Science Society (HSS), and the Society for the History of Technology (SHOT) to allow each association to award a fellowship. The stipend is $21,250 for each fellowship. Applications will be entered into consideration for all three fellowships. The deadline for application is April 1.

Tags: AHA Today Grant of the Week History of STEM