President Donald J. Trump’s new executive order on immigration was supposed to go into effect today. The new order was slightly narrower in scope than the original—it suspended travel from six countries instead of seven, and made exceptions for certain visa holders and US legal permanent residents. It also no longer singled out Syrian refugees for indefinite exclusion from the United States—all refugee settlement, including for those fleeing Syria, would have been temporarily suspended for four months pending further review. For now, thanks to a federal judge in Hawaii, the order is frozen. Speaking at a rally in Nashville, Tennessee, yesterday, Trump vowed to fight the freeze—all the way to the Supreme Court, if needed—and to, perhaps, reissue the original ban. Despite the uncertainty surrounding the ban, as a panel discussion hosted last week by Scholars at Risk at New York University Washington, DC, emphasized, the executive orders, and the anti-immigrant and anti-refugee sentiment they’ve helped generate, are already having a devastating impact on academic exchange and academic freedom. 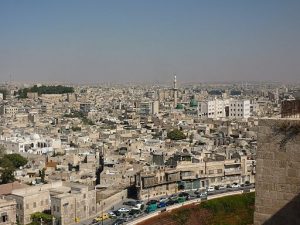 A view of the ancient city of Aleppo from 2009. A UNESCO World Heritage Site, the city has suffered significant destruction since 2012. Obersachse/Wikimedia Commons

Scholars at Risk (SAR) is a self-described “international network of institutions and individuals whose mission it is to protect scholars and promote academic freedom.” (The AHA is a dues-paying member.) It matches scholars facing violence or persecution at their home institutions or countries with other institutions that can offer “positions of sanctuary.” In addition, SAR advocates on behalf of scholars and monitors threats to higher education around the world through its Academic Freedom Monitoring Project. In its 2016 report, Free to Think, SAR estimated that there were 158 attacks on higher education, including killings, imprisonment, and terminations of positions, around the world between May 1, 2015, and September 1, 2016.

A restriction on immigration undoubtedly poses a threat to free scholarly exchange, and the panel discussion, which took place last week and was titled “Education Embargo: How Trump’s Immigration Ban Restricts Knowledge,” took the same as its concern. The panel featured Radwan Ziadeh, executive director of the DC-based Syrian Center for Political and Strategic Studies, and Salam Al Kuntar, a Syrian archaeologist and postdoctoral fellow at the University of Pennsylvania. The panel was introduced by Azar Nafisi, the best-selling Iranian American author of Reading Lolita in Tehran (2003), and moderated by Rob Quinn, executive director of SAR. For an hour and a half, panelists discussed the personal, humanitarian, academic, economic, and geopolitical impact of Trump’s recent executive orders. They argued that the executive orders enhance the victimization of those who are already at the receiving end of one of the worst humanitarian crises facing our generation.

“What is the situation of scholars in the banned countries? Who are the first victims of dictatorial minds?” asked Nafisi, drawing attention to those targeted by the executive orders. Referring to the destruction of cultural heritage monuments, bombardment of cities, and crimes against women and minorities, Nafisi pointed out that in countries like Syria, citizens’ “sense of identity and history” is currently at threat. When scholars from these places come to the United States, they are not just seeking to escape repressive regimes or war, they’re also seeking to recover their “lost and confiscated” history and culture. Sanctuary allows them to tell the truth about what’s happening in their countries. A “Muslim ban,” Nafisi argued, constitutes a “crime against victims of refuge.”

Salam Al Kuntar, who is a 2015 National Geographic Emerging Explorer, works with Iraqi and Syrian heritage professionals to preserve cultural heritage that is currently under threat due to war. Al Kuntar pointed out that it was not just ISIS destroying cultural heritage, but also the Syrian regime and the coalition forces. With 8 million people already having left the country, panelists noted that the entire fabric of Syrian society was being ripped apart. The “misery” of the people of the countries facing restrictions, Al Kuntar reminded the audience, did not “start with the ban.” But placing travel restrictions on scholars who are fighting to preserve Syrian cultural heritage and identity, and denying them refuge where they can continue their work, escalates the damage. Al Kuntar, who has a Syrian passport, noted that if the new travel ban goes into effect, she would be unlikely to travel to the Middle East to conduct her archaeological work and training. Ziadeh, a human rights activist, scholar, and legal permanent resident, also recounted the harrowing experience he had recently when trying to enter the United States—Ziadeh was in Turkey when the first travel ban was announced, and was interrogated for three hours at Dulles International Airport upon return.

Travel restrictions only speak to one aspect of the executive orders’ suppression of academic exchange. Panelists argued that the rhetoric used to justify the immigration ban relies upon spreading falsehoods about refugees, limiting curiosity about cultures and nations different from one’s own, and using the highly disputed “clash of civilizations” narrative. In trying to “justify something that is unjustifiable,” the panelists argued that the administration is “normalizing lies.” According to Quinn, the immigration ban has created an ideologically driven narrative about Muslims and refugees. Scholars who seek to respond to these state narratives, panelists noted, risk persecution even in the United States.

These are issues that historians must also confront. As the AHA’s statement on the new travel ban states, the “risk to prospective immigrants and visitors” created as a result of the order “will have a chilling effect on the presence of international students and scholars that benefit our classrooms, global diplomacy, and the international interchange of ideas.” And in disallowing refuge to scholars who need it most, as Nafisi, Al Kuntar, and Ziadeh argued, the chilling effect will extend to history and historical knowledge.