Maria Bashshur Abunnasr is an independent scholar, historical consultant, and oral historian. She lives in Beirut, Lebanon, and has been a member since 2010. 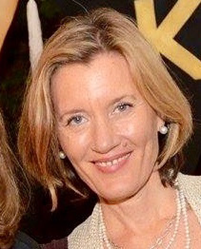 Maria Bashshur Abunnasr is an independent scholar, historical consultant, and oral historian. She lives in Beirut, Lebanon, and has been a member since 2010.

Describe your career path. What led you to where you are today? I almost immediately fell into teaching once I returned to Beirut in 1992 after my MA and after the end of the Lebanese civil war. I first taught Introductory History of Art and Architecture at the American University of Beirut (AUB). After a few years there, I joined the faculty of the American Community School as a high school history teacher from 1995 to 2006. Teaching modern Middle East and 20th-century world history to high school students in the International Baccalaureate Program inspired me to pursue my doctorate in history. So in the summer of 2006, coinciding with the outbreak of the Lebanon war, my husband and two sons relocated to Amherst, Massachusetts, where we both joined doctoral programs at the University of Massachusetts Amherst. In 2013 I defended my dissertation and we resettled in Beirut. With a public history background, I became involved in a number of local history projects, such as a neighborhood oral history project and a visual history exhibition. As the field of public history is not at all established in Beirut, being an independent public historian is both challenging and rewarding.

What do you like the most about where you live and work? Beirut is a place of boundless energy and possibility and is anything but boring. It is a place that you can hate one minute and love the next. The kind of tension Beirut exudes is both inspirational and frustrating. What I most appreciate about Beirut is its resilience. I am constantly amazed at the kinds of entrepreneurial and cultural initiatives that Beirutis take. Because so many have lived outside Lebanon, those who return bring with them their experience; so not only is Beirut resilient but it is also diverse.

What projects are you currently working on? Recently I have lead three public history projects in Beirut. The first involved conducting interviews with over 60 of Ras Beirut’s longest-standing inhabitants. I compiled the oral histories into a book, We Are in This Together: The Ras Beirut Oral History Project, that will be published by AUB Press in late 2017. I also curated a public exhibition “AUB and Ras Beirut in 150 years of Photographs.” I enlarged and printed photographs on flex canvas and then mounted them on the external wall of the university to create a visual continuum of images 180 meters long. The exhibition is being published as a book by the same title in the summer of 2017. For my third project, “46 Streets,” I located Beirut streets named after people associated with the university. This map of the imprint of university on the city will be printed in a 160-page bilingual (English-Arabic) guide with a pull-out map that locates each of the 46 streets accompanied by a biographical sketch. I am presently leading another project, “Preserving Protestant Heritage in the Middle East,” at the Near East School of Theology that involves promoting and raising the visibility of the unique archival collection housed there.

What’s the most fascinating thing you’ve ever found at the archives or while doing research? A photograph dating from the 1920s of a person I recognized based on an oral history interview. The photograph was not labeled, except as “the cake man,” and I guessed that it may have been of the grandfather of an 88-year-old man I interviewed several times. His oral history always started with the story of his grandfather, the most famous baker of the neighborhood. The best part was giving a copy of the photograph to the grandson who vividly remembered his grandfather but of whom he had no photograph.

Is there an article, book, movie, blog etc. that you could recommend to fellow AHA members? Faith Misplaced: The Broken Promise of US-Arab Relations, 1820–2001 by Ussama Makdisi. There is not enough written on the historical context of US-Arab relations and this book fills many gaps. I also highly recommend the Ottoman History podcast series.

Why is membership in the AHA important to you? My AHA membership connects me to the larger pool of historians in the United States and is vital to my sense of purpose and relevance. I particularly enjoy learning about the increasingly diverse ways historians take their profession and their practice beyond the walls of the academy into the public realm.