Kenneth C. Ward is the Maury A. Bromsen Curator of Latin American Books at the John Carter Brown Library. He lives in Providence, Rhode Island, and has been a member since 2013. 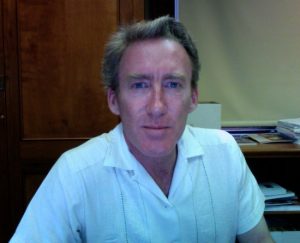 Kenneth C. Ward is the Maury A. Bromsen Curator of Latin American Books at the John Carter Brown Library, and has been a member since 2013.

Describe your career path. What led you to where you are today? I often say that I am an accidental librarian. After a bachelor’s degree in anthropology, I did two years of research in Brazil, and found I prefer books and documents as sources, rather than people. Returning to Portland, I took a job at Powell’s Books as a used book buyer. One day a young man brought in a book printed in Mexico in 1746. By this time I had seen all sorts of 18th-century European books, but never one from Latin America. I kept asking questions about the history of the book in Latin America, and was not satisfied with anything I was finding. So after almost 10 years I decided “that’s a dissertation.” Like most graduate students, I was planning on a faculty position, but as my research was concluding and my money running out, the position I currently hold was created.

What do you like the most about where you live and work? The John Carter Brown Library is one of the world’s greatest library collections, and in some areas it is unsurpassed. One of our great strengths is Latin Americana. Helping to build the collection through acquisitions is a complete joy, and working with visiting fellows has been both enjoyable and challenging.

What projects are you currently working on? I have recently turned back to revising the dissertation into a book. My project focuses on a family of printers and booksellers active in New Spain from 1570–1815. For much of this period they dominated the trade, at one point exercising an effective monopoly. These were not high-level merchants, or subalterns, but somewhere in between. The large questions I am trying to answer are “How did they do it? How did they manage to keep the business going so long, and so successfully?” Much of what is known, and until recently, much that has appeared in the secondary literature, derives from work done in the 19th century and our understanding of the subject is in dire need of revision. I have also sketched out and begun working on a book about forgeries, and one that will be a broad survey of printing and the book trade in Latin America during the colonial period.

Have your interests evolved since graduation? If so, how? My interests have broadened, if anything. I tell people that being at the JCB is like a second graduate school education. The weekly fellows’ talks have taught me to think more broadly about the British, French, Dutch, etc. Atlantic. And having 30–40 of the smartest folks in the world coming through each year, all working on their latest projects, is a rare privilege.

What’s the most fascinating thing you’ve ever found at the archives or while doing research? Perhaps not the most fascinating, since there are too many to select from, but the most humanizing: one of the first documents I looked at in the Archivo General de la Nación in Mexico contained extracts from the last will and testament of Bernardo Calderón, patriarch of the printing dynasty I study. In it he notes that his wife, Paula de Benavides, was pregnant at the time the will was drawn up. Brought a tear to my eye.

Is there an article, book, movie, blog etc. that you could recommend to fellow AHA members? As historians we spend a lot of time consulting books printed in the hand press period, roughly up to 1820. But few consider what went in to actually making these material objects. Philip Gaskell’s New Introduction to Bibliography is, I believe, the best starting point.

Do you have a favorite AHA annual meeting anecdote you would like to share? The first AHA I attended, I presented at a joint Conference on Latin American History session focusing on graduate students’ work-in-progress. During the Q&A, John “Fritz” Schwaller asked me a question I did not quite have an answer to. I kept mulling it over, as one does in these cases, until I came up with an answer. It took a year at least, but what I came up with became, in large measure, the overarching frame for the dissertation. I have thanked Fritz for this, of course, and we always make time for a meal together when we are at conferences together.