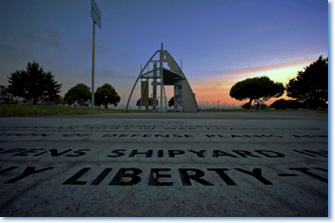 The National Collaborative for Women's History Sites (NCWHS) held a workshop at the historic Sewall-Belmont House and Museum in Washington, D.C., focused on the need to research, interpret, and preserve women's history in the National Park Service (NPS) parks and programs. Founded in 2001, the NCWHS promotes the preservation and interpretation of sites and locales related to women's history. Members include individuals such as women's historians and public historians, as well as organizations and sites commemorating and interpreting women's role in American history.

More than 50 representatives from the fields of archaeology, architecture, preservation, and women's history attended the workshop, entitled "Telling the Whole Story." Participants included NPS administrators, superintendents, historians, and rangers. Representatives of the Organization of American Historians, the Society of Architectural Historians, and the Vernacular Architecture Forum also participated.

Discussions focused on the current efforts to document and interpret women's history within the park service, the conceptual challenges of interpreting women's past, and the scope of the NPS holdings documenting women's history. A summary in the workshop report described a wide-ranging conversation about "how to present women's stories that exist within the contexts of families and communities; grounded in the specific details of work, economics, race and ethnicity, religion, class, sexuality, time, place, and legal status."

At a closing reception at the U.S. Capitol, participants presented recommendations to Secretary of the Interior Ken Salazar. In his remarks, Salazar emphasized the need to present an inclusive story through the National Parks, noting that if only four percent of NPS sites focused on women's history, "we have not been telling the full story of all of America." The recommendations identified several concrete steps the National Park Service could take to increase coverage of women's history in its parks and landmarks. Highlights of some of the recommendations include:

Susan Ferentinos, project manager and board member of the NCWHS, summarized the proceedings: "I believe the 'Telling the Whole Story' summit marks an exciting new era within the National Park Service, where interpreters and historians move beyond bureaucratic departments and work together to capture the full complexity of the U.S. past.… Currently, we are forming working groups to pursue each of the summit's recommendations; creating a webinar on including women in NPS interpretation; developing a survey of women's history sites that are not yet under the protection of preservation programs; and working with the National Historic Landmarks program to nominate additional landmarks significant to women's history. The combined result of these and similar efforts will be a more robust and relevant Park Service." Details about the workshop are posted on the website.

Debbie Ann Doyle is the AHA's coordinator, committees and meetings.

A version of this article appeared in AHA Today.