The Chronicle Launches the Adjunct Project 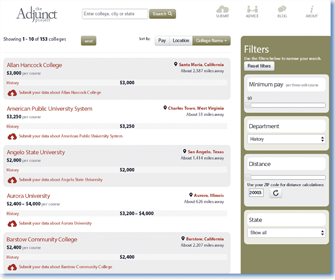 After years of reporting on the pay and working conditions of adjuncts, the Chronicle of Higher Education recently took a step from what one commenter called "occasional 'objective' coverage to activism" with the launch of the Adjunct Project, a new web-based tool for adjuncts and the people who hire them.

The tool, which employs a sleek, easy-to-use interface, supports three main tasks: submit salary data, search salary data, and read advice on teaching and working as an adjunct. The "Research" function allows users to look up adjunct salaries by state, institution, and field, and it's populated with crowdsourced data from users through the "Submit" function. Users can go to the archive of Chronicle columns and articles in the "Advice" section to read up on how the professional and labor issues around this topic have evolved. A separate blog provides a platform for adjuncts to discuss issues in their profession. Development of the Adjunct Project, which is supported by the Modern Language Association and the AHA, was based on an original spreadsheet of salary data created by Joshua Boldt, a composition instructor who runs a blog called Copy & Paste: Economics of American Higher Education.

Like any good data visualizer, the Adjunct Project is slightly addictive, and can potentially provide hours of fascinating digressions. Users may quickly find themselves perusing content that doesn't necessarily pertain to their own situation, but is interesting nonetheless: "Why do anthropologists make so much more than other fields in the humanities at that one state school?" "How much does the school I recently attended pay adjuncts?" and "Who got paid $20,000 to teach one course at Cornell?!" More to the historians' advantage, users can get a general sense of how history is valued, literally, at individual institutions by comparing the salaries for history adjuncts to that of adjuncts in other fields.

The research function is dependent on the data provided by users, which may be either the adjuncts themselves or institutions that employ them. Interestingly, while the adjunct user may remain anonymous, the institutional user must provide a valid e-mail address before submitting salary data. The submit function also asks for other types of data about benefits, working conditions, and participation in governance in the hopes of providing a more complete picture of adjunct pay and working conditions.

The heart of the site is the searchable salary data that is collected and displayed. Salary figures are given for three-credit courses at both two-year and four-year institutions, and there is a tool for converting a user's salary to the standard three-credit course figure the site uses, if needed. The Adjunct Project acknowledges that it does not validate individual data sets, but submissions are moderated before being posted to the site.

Some commenters have lamented the relatively poor statistical sample for many schools, where often only one person has submitted data. In addition, the wide variety of teaching frameworks and benefits (some adjuncts report tuition remission arrangements) make this data hard to use for fine-grained, discipline-specific analysis.

Aside from pulling the veil of secrecy back from the issue of salaries, the tool provides a few ways to parse the salary data and determine broader trends and issues. The Chronicle did some of this analysis itself ("Adjunct Project Reveals Wide Range in Pay," January 4, 2013) and found significant disparities in salary between institutions, and, importantly, by region.

According to the Chronicle's analysis, historians did fairly well when compared to other disciplines, with an average of $3,267.59 per three-credit course, and did better than the average for the humanities overall (at $2,987 per three-credit course). As of December 2012, the Chronicle had collected data from 1,800 adjuncts at 1,050 colleges. Only 68 historians had reported at the time of the article, and this may account for the discrepancy with the median salary of $2,500 per three-credit course for history adjuncts (and a median of $2,600 for the humanities generally) reported in the Coalition on the Academic Workforce's 2012 survey of 682 historians.

Historians can also view how their salaries compare to those in other states or institutions. It would be useful to have the ability to map this data so that users might be able to see regional averages or patterns, as well as how these salaries compare to cost of living indexes and other variables.

Most of the online conversations about the site concurred that the Adjunct Project is a tool with enormous potential and value for adjuncts and graduate students, one that can theoretically help move the conversation about adjunct working conditions from complaint to action. With the addition of more functionality such as a way to link job postings directly to institutional data, a chat or forum feature, and tools for finding low-cost health care groups, the Adjunct Project has the potential to become a true community, and perhaps more. As this data becomes more widely available, and hopefully more robust as time goes on, an underlying question persists: "What will we do with it?"

A version of this story appeared on the AHA Today blog.