The Benefits of a Good Story: The BackStory Historians Take on Inauguration History 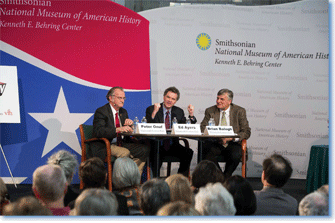 Although the parade is over, and everyone who attended the inaugural balls has hopefully recovered, I have one more addition to the 2013 inauguration conversation. Recently, I had the opportunity to attend a live broadcast of BackStory with the American History Guys on the topic of inaugural history, held at the Smithsonian's National Museum of American History in Washington, D.C. The setting could not be more perfect, as the city had been in the grip of inauguration fever as thousands of tourists circled the National Mall just outside the museum's doors.

It was a tall order to ask jaded D.C. residents to revel in the inaugural festivities, but all of the cynicism in the air seemed to disappear when the History Guys (Ed Ayers, Peter Onuf, and Brian Balogh) made an early entrance on to the stage. As they snaked their way through the aisle between the crowd and stage, they were pulled in different directions by fans and colleagues eager to shake their hands or even take a picture with them. Those who couldn't secure a seat lined the balcony of the museum, straining their eyes to catch a glimpse at the History Guys from two floors down.

It was soon clear why the program has become so popular. Between the good-natured teasing between the Guys (part of which hinges upon an endearing rivalry between history specialties amongst the group), hilarious historical anecdotes about inauguration balls gone wrong (including an inebriated Vice President Andrew Johnson delivering an incoherent and rambling address), and interesting questions from the live audience, it felt less like I was in a museum and more like I was a privileged guest in their homes.

The program began with a deceptively simple question: What is America's most important inauguration? Onuf, the resident 18th-century historian, argued that it was the first, when the future of the Republic was not at all certain, and a terrified George Washington voiced his concern (and frankly, his doubt) about the viability of democracy. Ayers, the 19th-century specialist, countered Onuf, arguing that it was Rutherford B. Hayes's inauguration, when Americans threatened to riot in the streets of D.C. This, according to Ayers, was a moment when the people faced many of the concerns Washington expressed about popular democracy at its darkest in his first address.

During the program, Harry Rubenstein (political history curator at the Smithsonian National Museum of American History) showed the audience some political ephemera from past elections. He also made an important point to the audience: Every inauguration is designed to send a particular message. Jimmy Carter, for example, in an effort to distance himself from Richard Nixon and the imperial-style presidency, hosted a series of parties to promote his image as a populist. Symbolism is not confined to the administration. Rubenstein also collects inaugural ephemera from the public, including a button-bedazzled hat he showed off to the audience that had been worn by an anonymous inauguration attendee. Rubenstein argued that attendee ephemera such as this are just as important to understanding the political culture of an inauguration, in part, because it demonstrates "an exuberance to participate and have a role in the process."

In the end, the History Guys did agree that Inauguration Day is a rare opportunity, as Onuf eloquently remarked, when Americans gather together "to look to the past in order to know what obligations we have to the future." With that, the History Guys had artfully used history to offer their audience a fresh perspective on the inaugural events going on just outside the museum's door. I could give a more detailed summary of the show, but I could not truly do it justice, and I strongly urge you to watch the video.

As I wrote this piece, fresh on the heels of William Cronon's annual meeting address, I was reminded of the way he implored historians to utilize storytelling in their work more often. Cronon asked the audience not just to make history more exciting, but to use storytelling as a tool "to make the past—the dead past—live again." In this frame of mind, I observed how the History Guys had done just that: Galvanized an audience full of cynical Washingtonians by commemorating the past and thus offering a more complete understanding of the present.
It was Ayers who referenced the power of storytelling in history best, telling a rapt audience, "History is unexpected. One of the amazing things about studying history is that it is one surprise after another." Although BackStory with the American History Guys is a radio program intended to entertain, I think its format clearly offers lessons for the discipline on the benefits of telling a good story.