Pacific Worlds and the U.S. History Survey: The AHA's Bridging Cultures Project at the Huntington Library 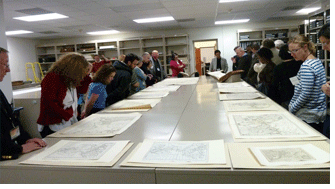 The week-long AHA Bridging Cultures Pacific Institute at the Huntington Library in San Marino, California, concluded a few weeks back with considerable excitement. A project of the National Endowment for the Humanities' Bridging Cultures at Community Colleges initiative, the group of 30 community college faculty members, team leaders, and AHA staff had a busy week of seminars and research (while also enjoying some fantastic Southern California weather). The seminar, focused on the Pacific Rim, is part one of a three-part endeavor entitled "American History, Atlantic and Pacific." Next year's seminar on the Atlantic Rim will be held at the Library of Congress in Washington, D.C., followed by wrap-up discussions and presentations linked to the AHA's annual meeting in New York in 2015.

Each morning the group participated in seminars and discussions with an exceptional team of presenters assembled by team leader William Deverell (Univ. of Southern California/Huntington Library). Following the seminars, participants had independent research time in the Huntington's vast research collection. Many of the participants also found time to explore the Huntington's stunning grounds, which include a phenomenal desert garden, orange groves, a Chinese Garden (Liu Fang Yuan, or the Garden of Flowing Fragrance) with a wonderful tea house, and the mausoleum of Henry and Arabella Huntington designed by John Russell Pope, the architect of the Jefferson Memorial.

The opening seminar, led by David Igler (Univ. of California, Irvine), provided a rich overview of the Pacific and its peoples. He noted the different ways Pacific history can enter into the U.S. history survey course, and predicted that a rising generation of Pacific scholarship would transform the discipline's conception of world history within a decade. The participants pressed Igler on particular aspects of Pacific history, noting examples that would prove particularly effective in the classroom.

On the second day, Ryan Jones (Idaho State Univ.) covered the Russian role in the Pacific, highlighting the environmental and social aspects of Russia's exploration and interactions with others. He discussed the Russians' colonial expansion model in terms of the fur trade, as well as their dependence on the native Aleuts.

The discussion dealt with ways of incorporating the history of the Russian Pacific into American history, and emphasized the significance of this history to students in the U.S. history survey course. At the end of the seminar, Jones guided the participants through the Huntington's stunning original copy of the 1822 edition of Voyage Pittoresque Autour du Monde by Louis Choris.

Archer's presentation focused on the central role Hawaii played as a transit point in Pacific history, and the problematic way it generally fits into the history survey. He noted that the survey only gets to Hawaii well into the 19th century but that its role goes back well before Captain Cook and the first American settlers visited the islands.

Yokota expanded the framework to a wider array of relationships around the Pacific Rim, and focused particularly on visual and material culture. Using objects from China, she showed a very different perspective of American culture and history and trans-Pacific trade relations, as the newly established nation first sought entrée into the Chinese markets, and then served in turn as a market for Chinese goods.

Tom Osborne (Santa Ana Coll.) kicked off the final day of presentations by discussing his experiences as a community college professor in California. He emphasized his efforts to mold the survey to his students, noting that with a diverse student population, there is ample opportunity to introduce a global perspective into the survey course, and that those connections often engage students on a more personal level. His main presentation, "Greater California: America's Pacific Eldorado," contrasted what is known and not known about the Pacific as compared to the Atlantic world. He went on to make Pacific connections to American history through California's role in the gold rush, transcontinental railroad, Spanish-American-Cuban-Filipino war, World War II, 1960s liberalism, and Silicon Valley.

The seminars concluded with Edward Melillo's (Amherst Coll.) discussion of the Pacific's highly interconnected environment. He described an array of different models and themes (such as trade, conquest, religion, and the environment) he uses in the classroom to connect the various stories of the Pacific Rim. But he particularly focused on the guano trade from Latin America, which facilitated a worldwide revolution in agriculture and the production of nitrates for gunpowder, but relied heavily on forced labor.

The final day was relatively brief, as everyone had to hurry back to their homes and schools (most of which were already in session). The participants gathered one final time to reflect on their experiences at the Huntington, what they took away from the presentations, and their expectations for the next institute. The general consensus was that they were all very excited to continue what they had started that week, and eager to keep in touch with the other members of the group as they begin to implement the ideas and research gathered at the Huntington.

Some said that they could start implementing what they learned as soon as the following week, while others foresaw a rockier path through administrative committees on their respective campuses. But they reported they were revitalized and recharged by their experience together at the Huntington, and were looking forward to reconvening in Washington, D.C., next January, when Philip Morgan (Johns Hopkins Univ.) will lead an institute on the Atlantic world.

Robert B. Townsend is the deputy director of the AHA and author of History's Babel: Scholarship, Professionalization, and the Historical Enterprise in the United States, 1880–1940.

A version of this article appeared in AHA Today.