New Year's Eve at the Archives 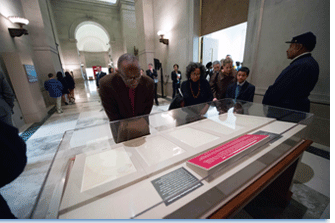 Having attended more than my share of annual meetings of associations of historians, I'm aware that we don't have a reputation for wild parties—or perhaps even tame ones. As Washington Monthly has observed, the AHA is "not generally a group known for awesome party times." So it would hardly surprise most people I know that a historian would spend New Year's Eve at the National Archives looking at a document. Moreover, standing in line for the privilege.

What might surprise many people, however, is the line itself—a line that stretched beyond the doors of the archives and that ebbed and flowed for three days, with considerably more flowing than ebbing even as the iconic ball was dropping in front of the usual throngs of revelers in Times Square. People waiting to look at a document.

These people were not historians. I shamelessly eavesdropped on conversations and learned that they came from all walks of life. The wide age range suggested that perhaps the jeremiads about the apathy of young Americans about the past might be overstated. One can tell when teenagers are dragged someplace by their parents, and these seemed to have either come on their own accord or with a positive attitude on a family outing. Nobody within earshot complained about the wait. The sense of anticipation was palpable. All for a single document.

It wasn't as if anyone in line would have a chance to actually read the document. When our turn finally came to walk past the case holding the five sheets of paper (three of which actually are facsimiles since the original was two-sided) we walked as slowly as seemed respectable, pausing, looking, and peering rather than stopping long enough to read substantial portions of the text. The experience lay in the seeing, in the participation in a public ritual of viewing.

Perhaps this was appropriate to the document in the case: the Emancipation Proclamation. In a way, its force lay more in symbolism than anything else. This executive order applied only to places in the United States where the president exercised no direct power, where his authority had been declared null and void by states in rebellion. It offers a lesson in the power of a statement, because thousands of enslaved Americans—some in states not in rebellion and hence not within the scope of the proclamation, and some in states covered by the order but beyond the reach of presidential power—heard about the document and declared themselves free.

Historians debate the dynamics of emancipation: who, or what, indeed freed the slaves? The image of the "Great Emancipator" took a hit during the latter part of the 20th century as many scholars argued that enslaved Americans "freed themselves" as they fled plantations and inundated the camps of the advancing Union army. The answer continues to teach us about the dynamics of change, the complex interaction of power exercised from above (the proclamation and later the 13th Amendment) and popular activism from below.

But on New Year's Eve we also were reminded of the power of memory, the power of a document that symbolizes freedom itself. We could, as James Baldwin once observed in a different context "see our inheritance." We stood in the presence of that inheritance, of the proclamation that offered the possibility that the "We the People" expressed in the encased document just up a small staircase in the rotunda might mean all of the people. Thousands of Americans filed past, perhaps less aware of the complex dynamics of emancipation than the centrality of slavery and freedom as magnets of American memory.