In Praise of Frank Capra, Fabulist 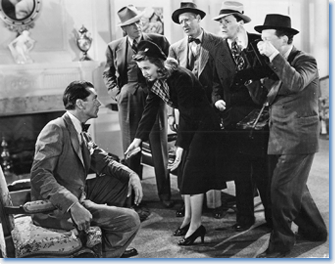 From 1936 to 1946, Frank Capra directed four of the most compelling movies I have ever seen: Mr. Deeds Goes to Town, Mr. Smith Goes to Washington, Meet John Doe, and It's a Wonderful Life. Alas, among my economically prosperous, stalwartly liberal friends—some of whom are historians—these New Deal-era films with a social message are something of a joke or, at best, the object of polite condescension. They scoff that the plots are unimaginative and sentimental, that the main characters are either impossibly virtuous or irremediably wicked, and that Capra's politics are banal. David Thomson, the prolific and eloquent critic, once sneered, "the most odious aspect of [Capra's films] is the way they bowdlerize politics by suggesting that the tide of corruption can be turned by one hero."1

Now, I would never claim that Capra's talents matched those of such auteurs as Coppola, Vigo, Hitchcock, or Kurosawa. To compare his work to that of such sublime and subtle directors is a bit like comparing Norman Rockwell's illustrations to the paintings of Whistler or Rothko. What I admire about Capra's films is how, as with Rockwell's art, he captured something vital and authentic about the political thinking and cultural values of Americans. These beliefs remain potent, three-quarters of a century later. It is thus no accident that these films have become icons of popular culture.

Capra achieved this feat, with the aid of several great actors and brilliant screenwriters, by telling fables. Artists with a political mission have often turned to fables to demonstrate the folly of malevolence and the innate wisdom of the common man, woman, or his/her anthropomorphic surrogate. Think of Harriet Beecher Stowe's Uncle Tom's Cabin, George Orwell's Animal Farm, or Dr. Seuss's Yertle the Turtle and The Lorax.

My four favorite Capra films—his populist quartet—place a white, native-born, small-town everyman in a roiling conflict against one or more powerful, arrogant, urban elitists, as well as his own insecurities. And each film shows how justice emerges victorious in the end, usually the very end.

In Mr. Deeds (1936), Capra cast Gary Cooper as Longfellow Deeds, a postcard poet from Mandrake Falls, Vermont, who inherits $20 million and decides to spend it all on small plots for farmers who lost their land, but not their work ethic, in the Great Depression. The primary villain is a crooked lawyer who tries to rob Deeds's fortune with a fountain pen. "Even his hands are oily," snaps Deeds after a reluctant press of the lawyer's flesh. In Mr. Deeds, Capra and his scriptwriter, Robert Riskin, devised a love interest repeated both in Mr. Smith and John Doe: a cynical, worldly, beautiful reporter who first exploits the naïve protagonist and then falls in love with his common-sense nobility. Jean Arthur played this role in both Mr. Deeds and Mr. Smith, and she played it to perfection.

Mr. Smith treads on more controversial ground. Jefferson Smith (James Stewart) is a new appointee to the U.S. Senate from a western rural state. When he learns he is only a "stooge" in an influence-peddling scheme, he mounts a one-man, day-long filibuster to salvage his reputation. Near the end of his marathon—which naturally rivets the nation's attention—the exhausted senator evokes the Statue of Freedom on the Capitol dome:

Get up there with that lady … . Take a look at this country through her eyes if you really want to see somethin'. … You'll see the whole parade of what man's carved out for himself after centuries of fighting. And fighting for something better than just jungle law. Fighting so as he can stand on his own two feet free and decent, like he was created, no matter what his race, color, or creed. That's what you'd see. There's no place out there for graft or greed or lies! Or compromise with human liberties!

Alone among Capra's populist quartet, Mr. Smith challenged the probity of a hallowed government institution, incensing the keepers of the institutional flame. "The thing was outrageous," declared James Byrnes, a powerful senator from South Carolina, "exactly the kind of picture that totalitarian governments would like to have their subjects believe exists in a democracy." Majority Leader Alben Barkley called the film "as grotesque as anything I have ever seen."2

The director was fortunate his critics didn't know what he knew—Sidney Buchman, the main scriptwriter, was a member of the Communist Party. Buchman remarked that Capra "mistrusted me terribly" because of his politics. The scriptwriter argued that, with fascism on the march, they needed to emphasize "the spirit of vigilance which is necessary if one believes in democracy, the refusal to surrender even before small things." Capra responded, "Go fuck yourself with your theme." But few of Buchman's words were changed, and the film made Capra one of the most popular directors in the country.3

That didn't save Buchman from suffering the same fate as most Hollywood Reds. In the early 1950s, he was blacklisted after appearing before the House Un-American Activities Committee. Buchman admitted his former membership in the CP (he had resigned in 1945), but refused to name anyone else. Days later, underneath the dome of the Capitol, the House of Representatives found him in contempt of Congress. There was not a single dissenting vote.

In Meet John Doe, Capra took up a much darker theme: a quasi-fascist takeover of the United States. This film's hero, Long John Willoughby (Gary Cooper), does not start out as an exemplar of optimism and moral decency, but as a suicidal and starving drifter. He ascends to virtue through a dense fog of naiveté and deceit, created partly by a clever blonde journalist (Barbara Stanwyck). When Willoughby realizes that her boss, D. B. Norton, made him leader of the John Doe Clubs as part of a power grab, the hobo-turned-hero rebels and vows to jump off the tallest building in town. The film concludes with perhaps the purest expression of populist melodrama ever seen on screen. A group of "ordinary Americans"—members of the John Doe Clubs—has convinced Willoughby to spare himself. Their unofficial spokesman turns to the would-be Mussolini and declares: "There you are, Norton! The people! Try and lick that!"

Most film critics regard Meet John Doe as the least successful of the populist quartet. Andrew Sarris called Willoughby "a barefoot Fascist, suspicious of all ideas and all doctrines, but believing in the innate conformism of the common man." Capra's biographer, however, claimed that the film showed "a deep distrust" of the common man, "portraying the public as mindless, fickle, and dangerously malleable."4 But the very ambiguity of how "the people" will act, particularly in a crisis, makes the film less simplistic and more challenging than Capra's others. Capra and his screenwriters had great difficulty deciding on an ending. Perhaps they realized that, particularly in 1941, what "the people" might decide to "lick," and how, were tantalizingly open questions.

There is no need to summarize the plot of It's a Wonderful Life, which is as familiar an element of Christmas or, perhaps, kitschmas, in the United States as candy canes and inflatable Santas. It also happens to be the most fully realized of the populist quartet. David Thomson acknowledges that the film is "rich in texture and nuance" and even ranks it (excessively, in my opinion) with Citizen Kane, The Godfather, and The Searchers as "terrific movies with their own plunge into the abyss."5 Jimmy Stewart never acted with more conviction or passion.

But the odyssey of George Bailey is more than one of redemption through his own good works and the love of a grateful community. The appeal of the film endures, in part, because its implicit ideology is still shared by most citizens of the United States. As E. J. Dionne, the columnist and historian, has written, "It tells politicians nearly everything they need to know as to how Americans think and feel about things that matter. Watching it is a lot cheaper than paying for focus groups." Dionne identifies four "commitments" the film expresses that "still run deep in the American character": egalitarianism mixed with a belief in upward mobility, capitalism but within "moral limits," a traditional family life but tolerance toward those who don't have one, and a value system that incorporates all these traits and desires.6

Now, "populism" has long been a famously promiscuous impulse, available both to right and left. It is difficult to decide on which side, if any, Capra falls. Every scriptwriter who worked on his populist quartet was either a New Deal liberal or, like Buchman, even more radical. But the director himself voted Republican throughout the 1930s and 40s, largely because of FDR's attacks on the wealthy, and rooted for Franco's forces to win the Spanish Civil War. Yet, Capra also walked a picket line during a newspaper strike in 1937 and, a year later, addressed a meeting of the Hollywood Anti-Nazi League, a Popular Front group in which both Buchman and his wife, Beatrice, were active.

Perhaps that very complexity, or ambivalence about making firm ideological commitments, is essential to what makes Capra's fables so powerful. The director was a self-made man who both identified with those who suffered through economic tragedies and resented authorities, whatever their office or pedigree, who were convinced they were destined to run the world and were willing to deceive, manipulate, and steal to achieve their ends. "All famous people aren't big people," observes Longfellow Deeds. Frank Capra, I hope you earned your wings.

Michael Kazin teaches history at Georgetown University and is co-editor of Dissent. His most recent book is American Dreamers: How the Left Changed a Nation.