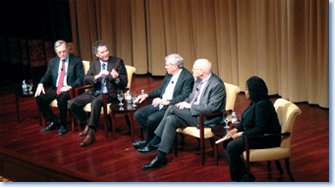 January 1, 2013, marked the sesquicentennial of the Emancipation Proclamation and, although the general historical consensus is that slavery was at the root of the Civil War, questions about the role of the proclamation in defining the conflict and 19th-century race relations continue to dominate the field. In January, Washington, D.C., was the site of two events on the topic: a panel discussion at the National Archives (NARA), chaired by Annette Gordon-Reed and featuring James Oakes, Eric Foner, James McPherson, and Ed Ayers, and a more intimate seminar led by Foner at the Wilson Center, sponsored by the National History Center (NHC). The well-attended events were an opportunity to promote this history to the public, and a window into the current state of the debate over how we should understand the document and its centrality to the Civil War.

Historian Stephen Ash once playfully wrote, "Historians continue to confound those who insist that everything that can possibly be said about the Civil War has already been said." Yet, as the NARA panel pointed out, it is the lack of a common, comprehensive narrative of the conflict that is inhibiting our understanding of the war. According to Oakes, new political, social, and cultural schools of thought rose to dominate the field by the 1960s, thereby fracturing the earlier one-dimensional narratives that had been accepted. This splintering has continued in the last decade as micro-histories have grown in popularity, and, as Oakes argued, in the consensus of most of the panel, the greatest challenge in the field is for historians to unite these subfields to form a more complete history of the conflict.

The Teleological Approach to the Civil War

From the idea of a fractured narrative, Ayers, Oakes, and Foner then pointed out the dangers of a teleological narrative of the Civil War, one in which events lead clearly to an inevitable culmination. According to Ayers, "history is a series of punctuations that can alter a person's world view." Anti-slavery legislation did not happen naturally, he argued, but was forced by a series of unexpected events. Foner seconded Ayers's point and argued that historians still tend to see the Civil War unfolding in one direction (toward a Union victory), but that the war had no predetermined outcome. Instead, a deeply divided North riven by bitter political opposition made the war an unpredictable journey.

Questions from the audience during the NARA event provoked the historians to revisit this point, when a gentleman asked Oakes what his "north star" of events—a defining moment of the war that proved a catalyst for the Confederacy's surrender—might be. Oakes denied having such an event in mind, and argued that "things can happen in unexpected ways," and that history is a "series of structure and contingency" that requires a careful balance.

How Should We Understand the Emancipation Proclamation's Role?

Over the past few years, the Emancipation Proclamation has received renewed attention by historians, including Gary Gallagher, who disputes the document's role in tolling the death knell for the South in the Civil War, and the historians seem to agree on their disagreement with Gallagher's opinion during the NARA panel. Foner argued, both at the NARA panel and later at the NHC-Wilson lecture, that the proclamation should be viewed as a turning point because it opened the way for anti-slavery legislation to be discussed openly. Prior to the proclamation, most politicians "talked in the periphery of slavery" and never directly attacked the institution. "When they [Union officers] saw slaves were the backbone of the South in the war," McPherson pointed out, the North decided it was "time to take off the kid gloves" and free the slaves in order to end the war. Ayers agreed with Foner and McPherson and pointed out that the proclamation redefined "both the purpose and the way the war would be fought."

Lincoln, the Movie and the Man

It appeared impossible for the historians to avoid discussing Stephen Spielberg's Lincoln and Doris Kearns Goodwin's Team of Rivals: The Political Genius of Abraham Lincoln (which helped inform the movie). Foner strongly criticized the adaption, including the lack of black actors in the film. According to Foner, anti-slavery policy was not formed in a vacuum, and certainly not from any deeply held beliefs on Lincoln's part, as the film implied. Instead, Lincoln's position evolved because slaves forced anti-slavery policy by running to the Union lines shortly after the war began. But this aspect of the story, Foner argued, did not fit into Goodwin's projection of Lincoln as "a great emancipator" and was therefore purposefully left out.

Overall the events raised some great questions about the future of Civil War historiography, but what was particularly striking was their comments on the problems of the fractured narrative. Historians often joke about the congestion of Civil War studies, but if this congestion is inhibiting historians and the public from understanding the conflict in a meaningful way, perhaps it will require an ambitious few to jump into the lion's den and experiment with a synthesis.