Emancipation, the Cold War, and Hidden Themes of History 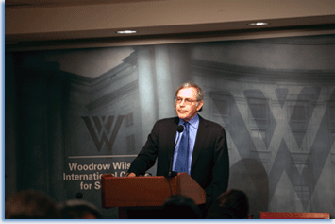 Sometimes it's easy to recognize the themes that animate the National History Center's programs—big events such as the Arab Spring, the breakup of empires, and the American civil rights movement can often shape the conversation. Other times, similarities become evident only upon reflection. The first two meetings of the weekly Washington History Seminar in 2013 are a case in point. The sessions, open to the public and co-sponsored by the National History Center and the Woodrow Wilson International Center for Scholars, furthered one of the History Center's goals—bringing the historical contexts of current policy debates to the fore. Ostensibly, the sessions focused on widely disparate subjects: the Emancipation Proclamation and the Cold War, and the participants certainly addressed those topics. But when these two sessions are considered together, other themes emerge: the ragged ways in which wars end, the fleeting nature of presidential leadership, and last, but certainly not least, presidents in the movies.

Both presentations sought to correct popular misconceptions about their subjects. Eric Foner's seminar, held on January 28 at the Wilson Center in downtown Washington, DC, and entitled "The Significance of Lincoln's Emancipation Proclamation for America," emphasized the change in Abraham Lincoln's attitudes toward slavery. Always an opponent of the "peculiar institution," Lincoln had been an advocate of "gradual emancipation" approach, which proposed sending freed slaves to Africa and compensating former slave owners for their economic losses. Foner noted that the intransigence of the South and the courage of enslaved people who fled to Union lines led to an evolution in Lincoln's views that found expression in the Emancipation Proclamation, limited though it was.

At the second session, held on February 4 and entitled, "Six Months in 1945: The Origins of the Cold War," former Washington Post reporter Michael Dobbs asserted that the conflict that divided East and West for more than 40 years began well before Winston Churchill's famed "Iron Curtain" speech, delivered nearly a year after the death of Franklin D. Roosevelt. Instead, Dobbs argued, it was set in motion by the meeting of Stalin, Churchill, and Roosevelt at Yalta in February 1945 and sealed by the Russian and British leaders' meeting with Harry Truman at Potsdam in July of that year. American attitudes toward the Soviets evolved during the interim, Dobbs observed, from eager allies to unequivocal enemies as a result of close and disillusioning interactions—first among ordinary soldiers and only later among high-level officials.

Each talk highlighted the circumstances surrounding the end of a long and difficult war—circumstances that involved the death of a charismatic leader. Dobbs suggested that the tremendous difference between the human costs of war borne by the Soviets and those borne by the United States helped set the stage for ongoing conflict, as the disparities led to lasting resentment. Though Foner concentrated on Lincoln's transformation between the beginning of the Civil War and the Emancipation Proclamation of 1863, he closed with a discussion of the second inaugural address, delivered barely a month before his death, in which Lincoln said that the guilt of slavery lay not only upon the South, but upon all Americans—the North, too, had benefited from the "unrequited labor" of enslaved persons. Foner, author of the seminal Reconstruction: America's Unfinished Revolution, 1863–1877, described the guerilla war waged by the South in the years after Appomattox, noting that the terrorists of that time killed more Americans than al-Qaeda.

The confidence the two presidents had placed in their ability to bring ideological opponents together was an underlying theme of Foner's talk and an explicit one of Dobbs's. But the not-unanticipated death of Roosevelt and the utterly shocking assassination of Lincoln rendered their confidence beside the point. Dobbs argued that despite Roosevelt's failure to involve his third vice president in policy discussions—including those about the atomic bomb—Truman attempted to follow the roadmap laid out by his predecessor until his own experiences with Stalin led him to a harder line. By contrast, when asked the inevitable question about how events might have unfolded had Lincoln survived Ford's Theater, Foner replied that Andrew Johnson had none of the qualities of greatness that equipped Lincoln for the challenges of transforming a national economy and polity based upon human oppression.

Probably to pre-empt another inevitable question, Foner prefaced his talk by jokingly comparing two recent films, Abraham Lincoln: Vampire Hunter and Steven Spielberg's Lincoln, adding that the former does a decent job of portraying antebellum America, while Spielberg and the writer of the latter, playwright Tony Kushner, make more claims to historical authenticity than their work can support. Dobbs, on the other hand, felt no need to mention Hyde Park on Hudson, the cinematic retelling of the visit by Britain's King George VI and Queen Elizabeth to FDR's family home, released at the same time as Lincoln. Daniel Day-Lewis, who portrays the president in Lincoln, has been nominated for an Academy Award. Bill Murray's less dramatic but perhaps more realistic turn as FDR seems destined to fade from public consciousness.