The Practice of Book History: Between and Beyond Disciplines 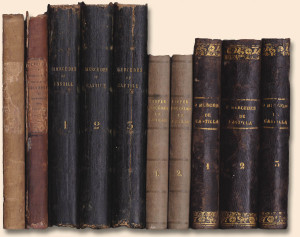 It has been about eight months since I finished my master’s thesis—a book history and critical edition of James Fenimore Cooper’s 1840 historical novel, Mercedes of Castile. It proved to be marvelous meat for my thesis. In the course of my research, I gained insight into Cooper’s love both for his wife and his new novel: in one of his letters he tells her, “You are my Mercedes”—referring to the idolized heroine and namesake of the novel. I learned about the press wars Cooper was embroiled in, which may have adversely affected sales of the novel; gained insight into the publication practices of Philadelphia publishers Lea & Blanchard by exploring their archives at the Pennsylvania Historical Society; and saw Cooper’s vast popularity reaffirmed by a variety of translations and illustrated editions that swiftly followed the first editions. Now, having been out of grad school for a while, I was thrilled to see book history on the program of AHA 2015.

Out of one novel, a multitude of questions arose, each fascinating in its own way. This phenomenon is the subject of the SHARP affiliate session, “The Practice of Book History: Between and Beyond Disciplines.” This panel will cover the many forms of book history—whether physical bibliography, histoire du livre, textual criticism, or digital applications of these fields. This diversity within the same field is the subject of Meredith McGill’s talk, and Jonathan Senchyne will look at how the field’s digital ventures bring it closer to the realm of information studies. And finally, Jessica Rogers will put forth the idea of a new discipline: “book transmission,” in which scholars concern themselves with the above mentioned facets of book history but add to them an understanding of the book’s physical condition. Her arguments will take book history into the fields of chemistry, conservation, and material craft studies.

A significant focus of this roundtable discussion will be book history’s capacity to revitalize study in a variety of disciplines. Book history is an inherently interdisciplinary field. Robert J. Scholnick’s research on Robert Chambers’s Vestiges of Creation—an 1844 book on evolution predating Darwin by 15 years—leads him into not only book and publishing history but the history of science, political theory, religious history, and economics. Book history can even help us understand Thomas Jefferson, Adolf Hitler, Winston Churchill, and Barack Obama better, as  Jonathan Rose will illustrate in his talk on how book history can inform political studies; knowing what a political figure read can help us better understand the policies that person helped shape.

The interdisciplinary nature of book history is often underestimated. However, it is vital that scholars from all fields recognize the value of their field’s written heritage and the role they must play to preserve it. This debate is more necessary now than ever. Last night at the plenary session, scholars discussed the issues behind the recent New York Public Library controversy; the core of this controversy is the value and utility of the printed record amid increasing interest in digital research tools. This is a question that the AHA and Modern Language Association take seriously; read their recent statement “Preserving the Print Record in the Digital Age” to hear plans to start a nationwide effort of gathering information, organizing conversations, and finally devising a framework which would serve as a guideline for institutions debating these questions.

Book history is a field which all scholars have a vested interest in. Regardless of our discipline, we should seek to understand its written works; an appreciation of this fact would make conversations on preservation, if not simpler, then at least open to the contributions of more people. “The Practice of Book History: Between and Beyond Disciplines” is a great opportunity to learn the manifold applications of this highly nuanced field. The roundtable will be held at 2:30 p.m. this afternoon in the Hilton’s Green Room.