The Man Who Floats on a Fish

Illustrating a magazine—its covers, articles, and empty spaces—involves hours and hours of searching through images. Since I joined the AHA in February, and Jacob Ingram joined us in the summer, Allen Mikaelian, Jake, and I have routinely spent hours looking for the right photos, drawings, or paintings; searching for license information; requesting permissions; and investigating copyright information.

The theme of this issue is assessment. Our forum on the subject contains four articles by historians who have thought about and experimented with evaluating their teaching and their students’ learning. James Grossman’s column also deals with assessment; he writes about the New York Board of Regents’ proposal to eliminate one history exam and retain one as required for high school students. But how would we illustrate the concept of assessment without using uninspired stock photography of paper exams?

The 18th-century miniature of Al-Khidr on the cover is inspired by Qur’an 18:60–82, where Moses asks Al-Khidr whether he may follow him and learn from his wisdom, to which Al-Khidr responds that Moses would not have the patience for the learning he wants to achieve. “You will find me patient,” Moses says. The first assignment Al-Khidr gives his student is not to ask questions about matters the teacher has not mentioned. But when Al-Khidr performs three acts that shock Moses (he damages a ship, kills a boy, and restores a wall for a people who refuse him hospitality), Moses exclaims that Al-Khidr’s actions are deplorable. “Did I not say that you would never be able to have patience?” Al-Khidr retorts, and proceeds to explain each of his actions.

The fish in the miniature painting represents a miraculous event that occurs at the beginning of the parable—on a journey in search of “the junction of the two seas,” Moses and his servant forget their fish, and it jumps into the nearby river. The next morning Moses asks for his breakfast and the servant says that he had forgotten the fish, and it returned to the sea. Moses declares that the spot where this happened must be their destination, and it is indeed there that they find Al-Khidr.

This parable became the inspiration for many more allegories, tales, and imaginativeinterpretations of Al-Khidr. Whether mythical or historic, Al-Khidr became an iconic figure among Muslims from the seventh century onward. In fact, the name Al-Khidr on this portrait is preceded by the Persian honorific khwaja (meaning lord or master) and followed by the honorific khan, which signifies nobility.

But the image of Al-Khidr in this miniature and the fables about him perplexed us. Al-Khidr’s assessment of his student, Moses, as one who would fail before he even began his journey with Al-Khidr turns out to be accurate. But were the actions that led to the confirmation of that assessment actually intended to be tests? Should assessments always be intended as such? The Qur’anic parable leaves Al-Khidr’s reasoning as a mystery until the very end, when Moses finds out why his role model committed murder.

When Jake saw the image, he asked a different question: “Why is the man floating on a fish?” Even though a fish is part of the Khidr parable, the Qur’an does not mention Al-Khidr as using it as a means for travel, but this became a popular motif in 17th- and 18th-century Mughal painting. Why? 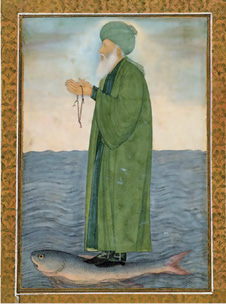 A 17th-century Mughal miniature of Al-Khidr. It is part of the Small Clive Album of Indian Miniatures currently at the Victoria & Albert Museum in London. {{PD-1923}}

A. K. Coomaraswamy gives us some clues in his article “Khwājā Khadir and the Fountain of Life, in the Tradition of Persian and Mughal Art,” published in 1934 (Ars Islamica, vol. 1, no. 2, pp. 172–82). Coomaraswamy illustrates his article with an image of Al-Khidr standing on a fish, but in that rendering he is also carrying a sword. Al-Khidr, it turns out, became legendary not only in Muslim communities; he was also worshipped by Hindus and became the saint of a popular cult. Because al-khidr in Arabic literally means the color green, Al-Khidr is often portrayed as dressed in green.

Coomaraswamy writes about the folk tale of Prince Mahjub, in which Al-Khidr appears as a secondary character, providing endless provisions for the main characters. In his analysis of such stories, Coomaraswamy comes to the conclusion that Al-Khidr is considered “master of the flowing River of Life in the Land of Darkness; he is at once the guardian and genius of vegetation and of the Water of Life, and corresponds to Soma and Ghandarva in Vedic mythology, and in many respects to Varuna himself, though it is evident that he cannot, either from the Islamic or from the later Hindu point of view be openly identified with the supreme deity.”

Perhaps that is the key to interpreting the image on the cover. The spot where Moses found his destination in the Qur’anic parable is where a fish is said to have come back to life and jumped into a river. This is the same river on whose banks Moses finds Al-Khidr, whose wisdom seems to be eternal like the waters of the river. By portraying Al-Khidr standing on the fish and using it to travel, the artists portray him as possessing eternal life and navigating its rivers.