Established by the AHA in 2002, the National History Center brings historians into conversation with policy makers to stress the importance of historical context in understanding current affairs. The NHC’s Congressional Briefings program invites leading historians to Capitol Hill to discuss the events that have influenced the evolution of current policies and alternatives.

On a morning when news reports of Russian-backed rebels driving Ukrainian forces from Donetsk airport served as a stark reminder that this troubling conflict persists, the National History Center sponsored a Congressional Briefing on the Ukraine crisis in historical perspective. The briefing, made possible by a grant from the Mellon Foundation, brought Mark Von Hagen and Timothy Snyder, two of the leading historians of Ukrainian-Russian relations, to the US Capitol to speak to a packed audience of congressional staffers, members of government agencies, and other interested parties.

Mark Von Hagen, a professor of history at Arizona State University, opened the session with an informative survey of Ukraine’s troubled relations with Russia in the 20th century. Ukraine gained independence from Russia in 1918 as a result of the German-imposed treaty of Brest-Litovsk. The Paris Peace Conference, however, refused to recognize Ukraine’s sovereignty and within a few years it had succumbed to Soviet rule. The second opportunity for independence came in 1991 with the collapse of the Soviet Union. Now Ukraine is threatened once again by Russian aggression. Von Hagen drew the following lessons from this history: first, that Ukrainians have sought independence for at least a century; second, that Ukraine’s future is tied to the larger geopolitical struggle in the region; third, that Ukraine’s survival as a sovereign nation requires international support. 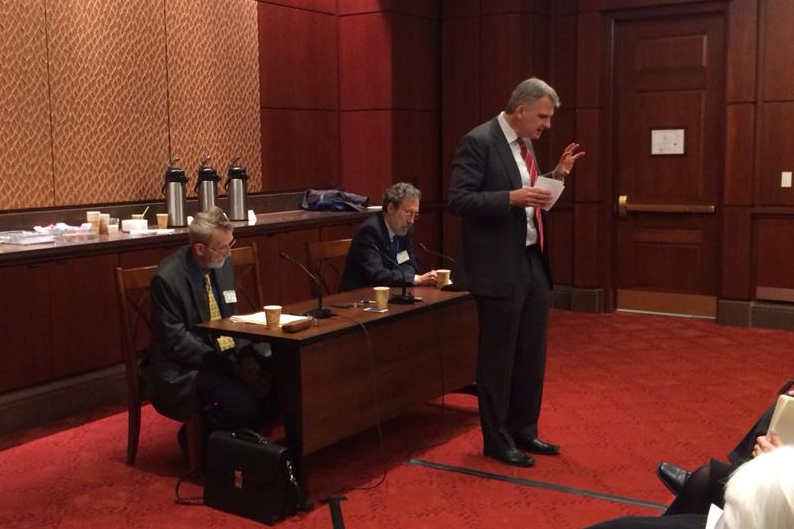 Timothy Snyder presents his paper to a room full of listeners. To his left, sit Mark Von Hagen and Dane Kennedy.

Timothy Snyder, a historian from Yale University, followed with some penetrating comments on the uses and abuses of history in the conflict over the fate of Ukraine. Claims about the past figure prominently in the current crisis, he observed, often in order to obscure real intentions. Stressing the importance of distinguishing between historical facts and historical myths, Snyder argued that the Russians in particular have distorted the past for propaganda purposes. One distortion is that medieval Kievan Rus’ was a Russian state that gives evidence of Ukraine’s deep historical connection to Russia. Another is that the Russian empire was innately multi-national and embraced Ukrainian interests. A third places the current conflict in the context of the Second World War, portraying it as a continuation of a Manichean struggle between fascism and anti-fascism. Snyder emphasized the Orwellian dimensions of Russian propaganda, which projects onto others its own agendas.

A number of other points arose in response to questions from members of the audience. Both speakers lamented that post-Soviet Russia’s window of political freedom closed so quickly and they worried that the Russian state will experience serious instability in the near future. Snyder argued that Ukraine is merely one aspect of a larger strategy by Vladimir Putin, who aims to undermine the European Union by dividing its members and encouraging right-wing nationalist sentiments. Both he and Von Hagen highlighted the importance of Germany in countering this threat, but they noted that fear of another war with Russia shut down a serious examination of the problem among most Germans.

Just a day after this briefing, pro-Russian rebels launched an assault on the Ukrainian port city of Mariupol. For those who make use of history to justify Russian actions or claim a false equivalency of intent on the part of Ukraine, Mark Von Hagen and Timothy Snyder offered forceful and compelling rejoinders.