Amanda Malkin, a Hagop Kevorkian Fund fellow at the Smithsonian’s Freer Gallery of Art and Arthur M. Sackler Galleries, is currently performing conservation work on the museum’s manuscript of Persian poet and scholar Jami’s Haft Awrang (Seven Thrones), which is dated 1556–66 and contains 304 bifolios and many illuminations. Another illuminated manuscript of two books from the Haft Awrang from around 1570 sold for over $95,000 in a Sotheby’s auction in 2009.

This manuscript is important not only because of its beautiful illuminations but also because of its author. “Anyone who studies classical Persian literature would have to read Jami’s works. Not just selections from the Haft Awrang but also his ghazals [love poetry],” Sunil Sharma, associate professor of Persianate and comparative literature at Boston University, said in a phone interview. In fact, Jami’s work became so popular that his manuscripts were translated centuries ago into other languages, including Chinese and Russian. ­According to Yiming Shen, who wrote her dissertation at the School of Oriental and African Studies at the University of London on Jami’s reception in China, these texts were taught in mosques in the original Persian and explained in colloquial Chinese. Shen examined translations of Jami’s work that were made by Liu Zhi (c. 1670–1745) and She Qiling (1638–1703), who transformed the Persian texts into Chinese texts, replacing most Arabic and Persian technical terms with Chinese terms; in these translations, even the word Allah was replaced with its Chinese equivalent: zhen. 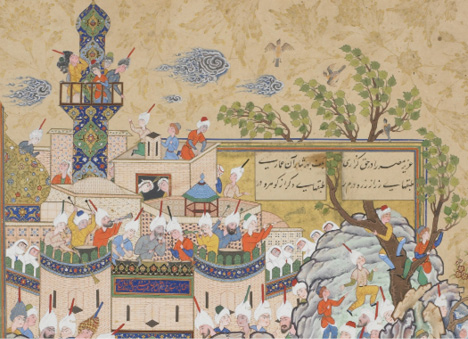 Jami, who died in 1492, wrote his Haft Awrang as a collection of seven works. “His work Yusuf and Zulaikha takes a figure from the Qur’an and builds a beautiful romantic tale around it with a sufi subtext,” Sharma said. The romances that he wrote “are philosophical and ethical, about correct behavior for human beings, rulers, Sufis.”

At the Smithsonian, manuscript conservation began around the 1930s. Manuscripts such as the Haft Awrang that are hundreds of years old typically suffer staining, small tears and flaking pigment. Malkin is conserving cracked and flaking paint in the Haft Awrang using a technique called consolidation, in which an adhesive made of seaweed is carefully used to re-adhere the pigment to the page. Accretions—foreign material that stick to the surface of the paper—are another problem. Some accretions are remains from previous conservation work that was done on manuscripts before the use of microscopes. Malkin is also reducing accretions on this manuscript with a scalpel.

Although the entire collection of works in the Haft Awrang has not been translated into English, there have been translations of two of the books: Salaman and Absal, by Edward FitzGerald, and Yusuf and Zulaikha, by David Pendlebury.