Silent Heroes: Teaching the Past through Remembrance

In the summer of 2011, Sam Spare, a student at Carlisle High School, in Carlisle, Pennsylvania, had his senior picture taken for the yearbook—an important rite of passage for all high school students. As he sat in his starched dress shirt, tie, and blazer, he could not help but think of the bright, hopeful smile of William T. McCabe, who 70 years earlier sat for his Carlisle High School senior picture. Since being a senior is all about looking forward, Sam wondered whether anyone would ever look back at his senior photo with the same amount of respect and gratitude that he had for William. At that moment, as Sam relayed this story to me, I realized that Sam had learned an invaluable lesson about the process of doing history—giving a voice to the past—and I needed to continue this with future students. Thus the initial thought of a Silent Heroes website project was born.

History is not something that is simply brought out of the archives, dusted off, and displayed as the way life really was. The understanding of history is a painstaking undertaking, held together with the help of arguments, hypotheses, and inferences. Teachers and students of history who push dutifully onward, unaware of all the backstage work, miss the essence of the discipline. They fail to recognize the opportunity to do the one thing we must do: question and assess history critically. Most of all, they miss the chance to learn how enjoyable it can be to go out and do a bit of digging and in the process honor the memory of someone or of some event.

The Normandy: Sacrifice for Freedom Albert H. Small Student and Teacher Institute, created by National History Day (NHD), granted Sam and me the chance to do some of that digging. I strive to be a courier of the past for my students in my capacity as an educator of American history. However, nothing could have prepared me for the journey I took or the classroom project that would emerge from it. For the past five years, NHD has engaged 15 student/teacher teams in a rigorous study of D-Day and World War II. Students and teachers attend lectures presented by leading World War II historians, participate in a scholarly study of the war memorials in the Washington, DC, area, and walk in the footsteps of history on the beaches of Normandy itself. 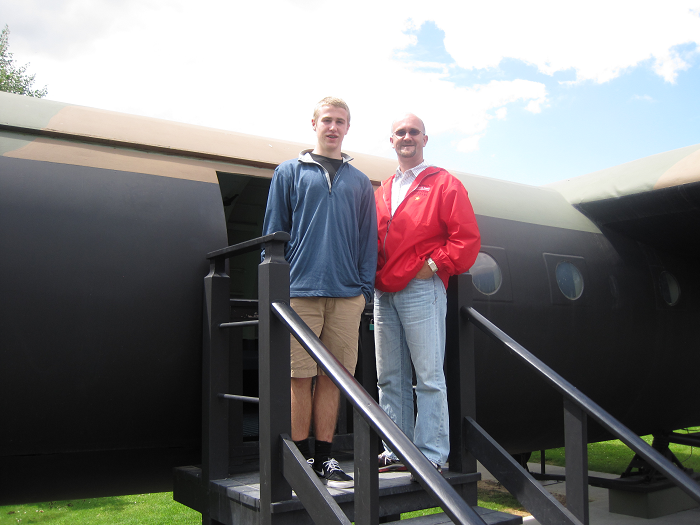 The journey began where any good historian would start—gathering and collecting a base of working knowledge from which to proceed in further study. Through a series of autobiographical and historical readings and films, Sam and I thoroughly immersed ourselves in the study of events leading up to and including the D-Day invasion of June 6, 1944. What heightened our journey was the ability to comment and reflect upon the daily chapter readings, as well as gain insights and perspectives from the other 14 student/teacher teams. Social media also made it possible for us to collaborate and discuss readings online.

Throughout this process, Sam began to locate, research, and write about a fallen American who had taken part in the Normandy campaign. The process was made even more intriguing as he was able to identify a soldier, William T. McCabe, who had graduated from our own high school. One of the joys of this program was hearing the excitement in Sam’s voice every week as he found new documents—a photograph or other viable evidence—pertaining to McCabe. He was realizing that the process of doing historical research is time-consuming and messy, and that many times it leads a historian to find some new piece of evidence or to encounter a dead end and begin again. As the weeks turned into months and June approached, Sam scoured microfilm and yearbooks, and even located living relatives. The process of researching history was coming alive for him with every turn.

By the time we arrived at the University of Maryland, College Park, our knowledge and understanding of World War II, and the soldiers who fought in it, had only begun. We were treated to opportunities that most educators and students could only hope to encounter. From laying a wreath during a formal ceremony at the Tomb of the Unknowns to a behind-the-scenes look at the National Archives, our eyes continued to be opened about the true historical process—engaging in and interacting with locations and documents that give a voice to the past. But perhaps the most engaging moment of all was arriving in France and traveling through the countryside of Normandy.

I cannot begin to describe the emotional roller coaster I experienced as I set foot on the Utah and Omaha beaches in Normandy. It is this type of emotional connection that we, as educators, hope to make between events and people of the past with our current students. This is how history and historical study come alive. How could these brave young men have gone through with this? How could they have sacrificed everything? The questions kept flooding my mind as I stood there and scanned the beach. Yet my emotional journey came to fruition when, upon turning to leave the beach, I found a small etching in the sand made by one of our students. It was simply the word “Thanks” with a heart drawn around it—so very simple, yet so profound. 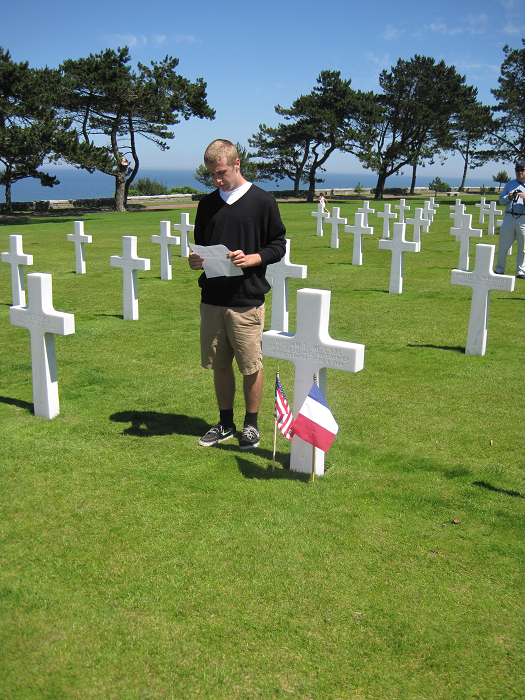 That small gesture was only magnified as we climbed the cliffs and entered the Normandy American Cemetery and Memorial. For over four hours, students and teachers alike stood motionless and silent as each student scholar memorialized their fallen soldier. One by one, each student knelt, placing an American and a French flag at the base of the pale, white marble cross. Then a short tribute to the soldier was read aloud, culled from the student’s tireless research.

What we heard were excerpts from letters home, comments by family members and friends, poems written by one of the students the night before, and songs of remembrance and longing. We heard the stories of brave young men who made the greatest sacrifice, their lives, in order that the world would remain free from tyranny. I experienced the highest honor any American educator can feel, as my young student paid respect to a bygone fellow American.

I remember leaving the cemetery that day thinking, “How can this moment and this legacy be brought back home?” The answer came one week after our return from France as I celebrated the Fourth of July. The holiday took on a whole new meaning for me, a meaning that continues to this day and translates into a great responsibility. We—teachers, students, parents, and all citizens—have a responsibility to remember those who gave their lives so that we might still be able to celebrate our freedom.

Each of us needs to connect with history in the way that Sam and I did—a connection that moves the soul, stirs the heart, and tugs at the very thought of what it means to be an American citizen. Each of us must make it a point to mobilize the memory of our country’s youth. This continues to be the driving force behind the Silent Heroes website project within my classroom. I want my students to personalize and humanize the story of America. I must get them to realize that there are ordinary individuals behind the extraordinary stories of our past.

To date, my students have been able to memorialize 37 men and women who made the ultimate sacrifice during World War II. As a result of their hard work and dedication, many of the students’ websites have been recognized, by the state and nationally, for their contributions to American memory and history. For example, three websites were selected by the National World War II Museum in New Orleans to be featured in a “My Memorial Day” tribute. One student’s work and dedication made a family realize that their uncle’s personal effects should be donated to a museum so that all can know his story. As Sam put it so eloquently from the beginning, 70 years from now the legacy of this newest generation of historians will remain, as they have created a lasting virtual memory of our nation’s silent heroes.

Kevin Wagner is the social studies program chair (6–12) at the Carlisle Area School District in Carlisle, PA, and teaches advanced placement US history. He received the AHA’s 2015 Beveridge Family Teaching Prize. The Silent Heroes website project, housed on the Carlisle Area School District website, can be accessed at http://www.carlisleschools.org/academics.cfm?subpage=1512905.

Look for Sam Spare’s comments about his participation in the institute on AHA Today.