Scholars on the Edge: The LGBTQ Historians Task Force Report and the AHA

Last June, LGBTQ people and their allies greeted the Supreme Court decision in Obergefell v. Hodges—which upheld marriage equality throughout the United States—with jubilation. But the right to marry, at least to some university administrations, now entails the obligation to marry. As Nicholas Syrett, co-chair of the Committee on Lesbian, Gay, Bisexual, and Transgender History (CLGBTH, an AHA affiliate), says, “My school, which had partner benefits for same-sex couples, has done exactly the thing that everyone feared they would do and eliminated them, and basically said, ‘Well, get married and you can have them.’ I was like, ‘So essentially, you’re forcing us [to get married]?’ The perception is, of course, ‘You won. Just do this thing.’”

Benefits are only one of the professional concerns of LGBTQ historians, according to the report of the AHA’s LGBTQ Task Force, which the AHA Professional Division (PD) convened in January 2009. The previous year, CLGBTH had requested that PD conduct “further research and analysis of the climate facing lgbtq historians and lgbtq history” in the AHA and in the discipline at large. Leisa Meyer co-chaired the task force along with the rotating PD vice presidents. PD appointed one member (Marc Stein), and CLGBTH two (Jennifer Breier and Susan Stryker). The task force submitted its report to the AHA Council in June 2015.

Council’s charge to the task force was to gather as much information as possible about the issues facing LGBTQ historians at all career stages and to propose concrete steps the AHA might take to address their concerns. Perhaps the most important source of information was an electronic survey distributed to AHA members in fall 2011. Anonymous quotations from the survey, included in the report along with representative statistics, provide grist for reflection on conditions at work, on the job market, in conducting and disseminating research, and in the classroom. 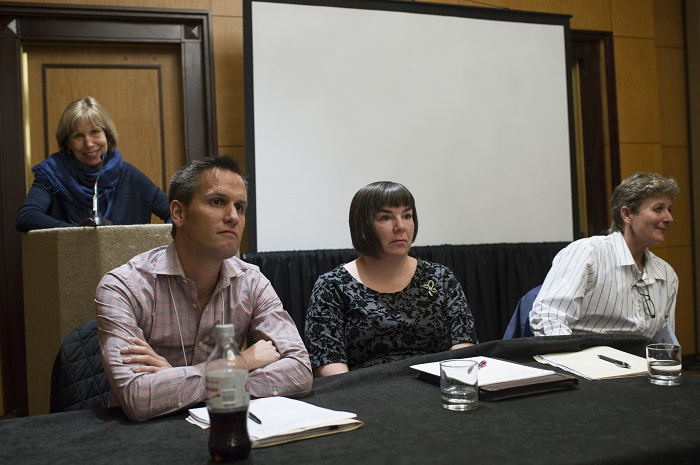 Nearly 25 percent of respondents described their job market experience as negative or strongly negative, while 21 percent said it was equally positive and negative. “My article on LGBT hist[ory] tends to come up in interviews,” wrote one; “it’s the first thing that appears when you google my name—and can be polarizing, either positive or negative.” “My gender expression more than my orientation has probably had a negative effect on my prospects,” explained another. “I am genderqueer and this is not a good fit in conservative departments. They don’t know what I look like when they invite me to interview but they go cold as soon as I walk into the room.”

On the positive side, the survey also found that “identifying one’s sexual orientation and/or gender identity/expression in the workplace is increasingly typical,” with 84 percent of respondents indicating that they had done so. Nonetheless, 22 percent of those noted that they had experienced discrimination as a result, and 49 percent of all respondents said there were times when they did not disclose their sexual orientation, gender identity, and/or gender expression.

Questions about campus climate also produced nuanced but pointed responses. LGBTQ AHA members sometimes live in states with conservative legislatures, dampening supportive campus atmospheres. “I honestly believe my department goes above and beyond to support gay and lesbian faculty,” one survey read. “But their hands are tied somewhat by State and Federal Law.” (Today, 18 states include neither sexual orientation nor gender identity in nondiscrimination laws.) Another historian offered, “My non-conventional gender presentation is very rare on my campus and often remarked upon. That is exhausting, but bearable.” Several respondents provided trans perspectives: “HR refused to give healthcare coverage to my domestic partner because she is female and I am now legally male . . . even though we are legally registered as domestic partners in our city of residence. As a result, my partner currently has no health insurance.” One trans historian also mentioned hostility from cisgender lesbian and gay colleagues.

One of the task force’s recommendations to the AHA was a permanent committee dedicated to LGBTQ issues. At the 2016 annual meeting, Council approved the membership of the first Committee on LGBTQ History and Historians (historians.org/clgbtqh). The committee will work to implement the recommendations of the task force, many of which center on inclusiveness—for example, in AHA policy and best practices statements, the annual meeting program, Perspectives on History articles, and sample syllabi and lesson plans provided by the Teaching Division. The permanent committee will also finalize the report before making it public.

Much work clearly remains to be done. At the 2016 annual meeting in Atlanta, Mary Louise Roberts moderated a session co-sponsored by CLGBTH and PD, titled “The LGBTQ Historians Task Force Report: Where Do We Go from Here?” La Shonda Mims (a historian of southern queer life) joined Syrett in reading some of the narrative survey responses, while Meyer provided background on the survey and the report. (Neither Syrett nor Mims was involved with the task force report.) A lively discussion followed, emphasizing that LGBTQ historians’ professional concerns aren’t limited to one type of institution or area of the country. Attendees underscored the importance of benefits, analyzed extensively in the report, but also noted problems stemming from student course evaluations; perceptions that LGBTQ history is narrowly focused; the lack of LGBTQ-related content in history surveys; discouraging advisers; intersectional issues of race, class, gender, and sexuality; and the precariousness of employment (including tenure denials and the perceived inclination of departments to create only adjunct lines for sexuality studies). Syrett raised an issue that seemed to resonate in the room: undergraduate history majors don’t see LGBTQ history as “real” history; it’s gender studies majors who fill the seats in his upper-level elective courses. Because these students bring different skills and knowledge to the class, he often must orient them to analytic frameworks and skills particular to the discipline of history.

Mims’s experiences might represent the ironies of an age in which the work of new scholars is outpacing both graduate program resources and the job market. In an interview, she characterized the reception of her work as largely positive. In her doctoral program at the University of Georgia, one initially dismissive professor didn’t pose an obstacle as significant as the fact that supportive faculty didn’t know much about the relevant literature. “When it came time for comps,” she said, “it was solely up to me to piece it together. I was fortunate that [noted LGBTQ historian] John D’Emilio worked with me on my comps and later as an outside reader. What I found frustrating was that—because my project is about southern history and queer history—the southern historians seemingly were so excited about it that I don’t think they were as critical as I needed them to be.” When she began speaking with historians of sexuality years ago, she said, she found she “might have had the education of the ’70s on some level.”

Echoing some of Mims’s points, Roberts observed that the position of LGBTQ history today mirrors that of women’s history in the 1970s and 1980s. With an initial wave of hostility overcome, a new generation of graduate students was poised to make breakthroughs, but the discipline lacked the sort of infrastructure that could nurture them. There was enough goodwill, in other words, but advising possibilities were limited, as were dedicated library budgets, teaching lines, conference opportunities, prizes, and other hallmarks of an established field.

The concerns of LGBTQ historians and scholars of LGBTQ history are more than a litany of complaints on behalf of a small minority. The task force report and the annual meeting session clarify the fact that professional problems translate into an impoverished sense of history. We’ll never know how many LGBTQ dissertations don’t get past the idea stage, or how many of those that are written never see the light of day as books, or how many undergraduates aren’t able to learn this history. In a public climate that’s often hostile to the teaching and learning of humanistic fields, the AHA’s advocacy for history will now include efforts to address these concerns through the work of the new permanent committee. The post-Obergefell era has only begun.