Postcards from Atlanta: Announcing the February Issue of Perspectives on History

Perspectives continues its tradition of devoting the February issue to capturing the spirit of the annual meeting just past.
AHA16 in Atlanta was a resounding success—we heard praise on everything from the quality of the panels to the quality of the food at receptions. But the best thing about the annual meeting, no matter the year, is the historians who initiate those panels, who pack those receptions—who constitute the essence of the AHA and the future of the discipline. Imagine a family reunion where everyone is a history nerd. That’s what Atlanta felt like, according to much of the feedback we received. 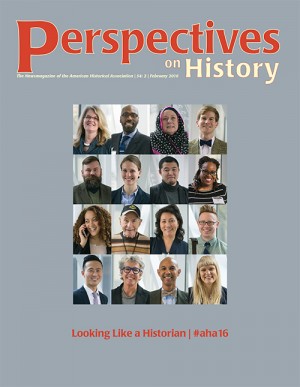 So February’s feature articles cast the annual meeting in different shades of light—and shadows. First, Vanessa M. Holden’s cover story, “The Natty Professor,” is an expanded version of an AHA Today post published during the annual meeting. What category of professorial chic do you fit? Do your bowties make you a Classic or a Dandy (or both)? Did that handbag or briefcase cost more than your grad school rent? Along with Marc Monaghan’s glamour photographs—captured on one of the inter-hotel skybridges in Atlanta—this piece captures the high affection for who we are that helps sustain us.

And let’s be frank, we do need sustenance in times like these. Robert B. Townsend and Julia Brookins’s report on job trends, “The Troubled Academic Job Market for History,” was published in a preview online and instantly launched much anguish. The news is mostly bad: the number of jobs advertised with the AHA fell below half of the number of PhDs awarded the previous year, and departments might not see many retirements in the near future. The article points out other, field-specific trends as well. We urge all historians to think about what the report means for our discipline—the AHA certainly is.

News like this has an impact on the annual meeting, because many new historians (be they graduate students, contingent faculty, or postdocs) go there to look for jobs. Whether you have an interview or not, being unemployed or underemployed in your chosen field is difficult when it seems that everyone else is swimming contentedly in the tenure-track pond. As editor, I thought it was time someone told the truth about how rough the annual meeting can be when you’re on the academic job market, and I didn’t want it to be an anonymous graduate student—it had to come from within the AHA. So I’m offering my own story, “The Annual Meeting Blues.” Solutions may elude us, but I do think acknowledging this as a problem is a first step.

In that vein, though, the AHA’s Emily Swafford reports that there was a “sea change” in discussions of careers among job seekers, who seemed more open to learning about a variety of careers available to them as historians, not simply academic ones. Cautioning that focusing only on the attitudes of attendees who participated in such events as the Career Fair and the Graduate and Early Career Committee Open Forum may skew impressions, Swafford notes that there was nevertheless a shift in conversations around career preparations. As the AHA Career Diversity for Historians initiative comes to the end of its second year, this bodes well for the future of the discipline.

Another topic that animated the meeting, as well as its opening plenary analyzing symbols of and monuments to the confederacy, was the role of historians in engaging with contemporary events and public debates. AHA executive director Jim Grossman builds on the discussion in his column, “Whose Memory? Whose History?” Offering specific steps historians can take to open up discussion about the nation’s legacy of racism, Grossman argues that it’s impossible to “erase these histories simply by taking down the reminders” of them.

This naturally brings to mind the ongoing student protests at many higher education institutions. A special session at the annual meeting, “From ‘ConcernedStudent1950’ to Diversifying the Profession: Responding to Student Demands for Change,” brought together faculty and administrators of color to propose new ways of thinking about these events. As Eladio Bobadilla writes, the panelists offered several insights, including the need to listen to students and to take seriously their efforts to create community through social media.

There’s much more to the February issue, including articles about the AHA’s LGBTQ Task Force Report, the unique historical knowledge base of the subreddit AskHistorians, even annual meeting–inspired poetry. We also invite you to read our blog coverage of the annual meeting—from how to define terrorism to how to crash a reception.

Finally, a quick reminder that the deadline to submit a proposal for the 2017 annual meeting in Denver is February 15, 2016. Next year in Colorado!