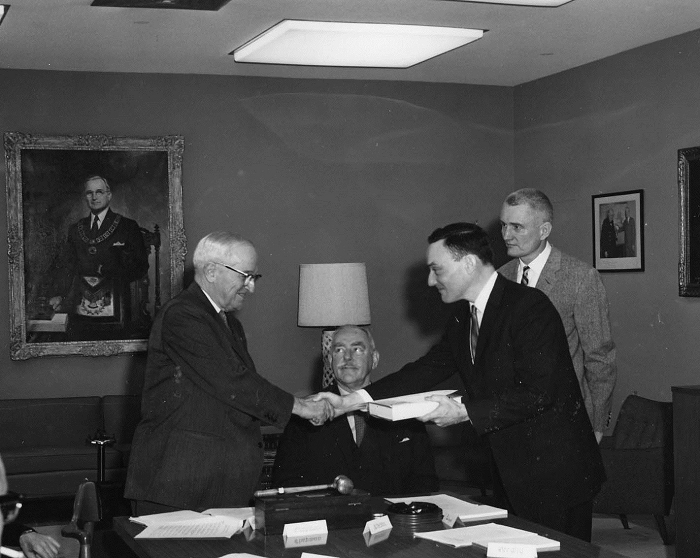 Richard (“Dick”) Hewlett devoted his career to shining light into the darkness. As the first historian of the Atomic Energy Commission (AEC), author of numerous works on the nuclear energy program, co-founder of the public history firm History Associates, Inc. (HAI), volunteer archivist and historiographer at the National Cathedral, and mentor to dozens of young historians, Dick dedicated himself to illuminating previously hidden subjects, documents, and ideas. Although he was not a college professor, he was an educator, providing public access to records and information and helping many young historians find their own voices. A meticulous researcher and an elegant writer, Dick approached his work with a generous and kind spirit, collaborating with others at a time when the profession favored individual labor. He led by example, showing those of us who were fortunate to work with him what it looks like to be a force for good in this world.

Like many of his generation, World War II and the Cold War shaped Dick’s career path. His Dartmouth education, which he began in fall 1941, was interrupted when he enlisted in the Army Air Corps in 1942. Within a year, he was engaged in technical training in science and electronics at Bowdoin and Harvard, followed by service as an Army Air Force rawin (radio winds aloft)-radiosonde operator and weather technician in western China from 1945 to 1946. Upon his return to the United States, he resumed undergraduate coursework at the University of Chicago and then moved on to the graduate program in history, earning his master’s in 1948 and PhD in 1952. He never officially earned the BA, because, he later confessed with his trademark impish humor and grin, the university wanted $50 to award the degree and he did not want to spend the money.

Despite his classic academic training under Civil War historian Avery O. Craven, Dick chose a career outside the academy. While finishing his dissertation, he took a civilian post in Air Force Intelligence before joining the AEC staff in 1951 to compile progress reports for commissioners, the Joint Committee on Atomic Energy, and the National Security Council, allowing him a rare holistic view of AEC’s highly compartmentalized and classified activities. By 1957, AEC chair Lewis Strauss had tapped Dick to write the history of the AEC, which he did in three compelling and award-­winning volumes: The New World, 1939–1946, written with Oscar E. Anderson Jr. and a runner-up for the 1963 Pulitzer Prize; Atomic Shield, 1947–1952, co-authored with Francis Duncan and a winner of the David D. Lloyd Prize from the Harry S. Truman Library Institute; and Atoms for Peace and War, 1953–1961, written with Jack M. Holl and awarded the Richard W. Leopold Prize from the Organization of American Historians and the Henry Adams Prize from the Society for History in the Federal Government (SHFG). In the midst of these projects and at the insistence of Admiral Hyman Rickover, he and Duncan wrote Nuclear Navy, 1946–1962, the definitive history of the initial years of that program. Dick’s work established him as one of the pioneers in the history of science and technology, a subfield that he avidly supported throughout his career.

Dick also blazed trails in public history, helping to establish the SHFG, the National Council on Public History, and the National History Center; chairing the National Coordinating Committee for the Promotion of History (1977–80); facilitating the creation of federal history offices in numerous agencies; and consulting with academics on the establishment of public history degree programs. From his position as chief historian for the AEC (1957–75) and its successor agencies, the Energy Research and Development Administration (1975–77) and the Department of Energy (1977–80), Dick helped others use its records and commissioned various historical studies. One of those, a history of the accident at the Three Mile Island nuclear reactor near Harrisburg, Pennsylvania, led to a business collaboration with authors Philip Cantelon and Robert Williams, along with a visiting scholar at the Department of Energy, Rodney Carlisle of Rutgers University. Together, they founded HAI in January 1981, not long after Dick had retired from federal service. At HAI, Dick and his co-founders shaped a private-sector version of public history, demonstrating how professionally trained historians and archivists could not only write sophisticated studies but also assist private and public entities in establishing archives, conducting litigation research, and declassifying documents, among myriad other activities.

Integrity defined Dick’s career and life. He nearly left AEC during the height of the Red Scare when one of his mentors was purged from the agency. As with his work at AEC, at HAI Dick navigated with diplomacy and tact the rocky shoals of writing history on contract. Dick never ignored or shied away from controversial topics, impressing clients with his professionalism and objectivity. So much of Dick’s scholarly production helped legitimize the field of public history.

From his position at HAI, Dick took many of us under his wing, offering us crucial support, such as reference letters, time off, space in his basement to work, sage writing advice, and a hot meal with him and his wife, Marilyn, as we pursued doctorates. He did more, however. He never failed to find the humor or see a bright spot in any situation, and this characteristic reminded us that there was more to life than a perfectly crafted sentence and well-documented argument. Indeed, his positive outlook on life gave us the confidence to learn from our mistakes—in life and in history—and to move on. When he passed away at the age of 92 on September 1, 2015, his extended family and many friends felt a keen sense of loss. Even so, we all continue to feel Dick’s spirit and carry with us his faith in the power of history to light the way to a better future.