Gearing up for AHA17: From Global Migrations to Historical Scale

Midway through discussing the American National Biography at the 2016 annual meeting, general editor Susan Ware asked her audience to imagine having “a ‘Fitbit’ to track Susan B. Anthony’s jaunts.” If we could map Anthony’s 1883 trip through England, Ireland, and France, for instance, we might be able to bring the transnational dimensions of the 19th-century women’s suffrage movement into sharper focus. 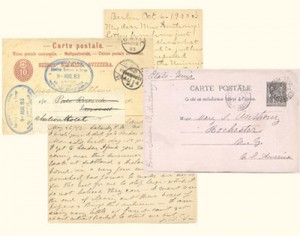 Ware then reached back a little further, to 1840, when seven delegates who’d journeyed from the United States to London to participate in the World Anti-Slavery Convention were denied entry on account of their gender and forced to watch the proceedings from a balcony in the conference hall. Lucretia Mott and Elizabeth Cady Stanton—who both feature prominently in Ware’s American National Biography and who first met at that convention—returned home with their outrage on full display and their ties to an array of European activists strengthened. “It’s not too much,” Ware concluded, “to think of suffrage as an international protest movement.”

The story Ware told was one of many at the annual meeting in which a scholar sequentially broadened focus from an individual to a neighborhood to a national, international, or even global perspective. Of course, the 2016 meeting was titled “Global Migrations: Empires, Nations, and Neighbors.” But that theme seemed to reflect a trend among historians themselves—or those increasingly inclined to question “the nation” as a default category of analysis—rather than one imposed upon them. Sir David Cannadine, another panelist at Ware’s session and presiding editor of the Oxford Dictionary of National Biography, conceded that there has never been “such thing as a hermetically sealed national biography,” but that the enterprise is “more global now than it’s ever been.” 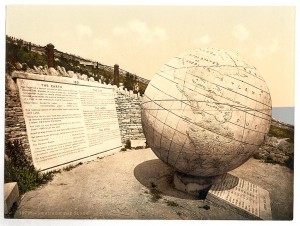 Assessing the “Origins of Global History” the next day—his fervor on equally full display—Felipe Fernández-Armesto made the case plainer still: “You can’t be a historian without being a global historian!” Less interested in uncovering the origins of global history than in determining why on earth we’d ever “stopped foregrounding the world as a suitable subject for its own sake,” Fernández-Armesto recommended historians pull as far back as their lens allows. “The cosmos is a possible context!” he said.

Which brings us to the theme of the 131st annual meeting: “Historical Scale: Linking Levels of Experience.” This is a theme that encourages us not only to keep all those transnational networks and neighborhoods firmly in mind, but to interrogate the connections between them. As the program committee put it: “The purpose of studying historical scale today is not so much to perfect national narratives as to develop insights into historical connections.” Scale here “refers most obviously to geographic space but also to time, topic, and perhaps other dimensions.” As a theme, it will be humming headily in the background in Denver, but it has no bearing on the Program Committee’s evaluation of proposals for sessions, workshops, or posters. All historians are encouraged to submit proposals, whatever places, periods, or topics they study. The committee welcomes “diverse sources and methods, including digital history,” as well as “all proposals that advance the study, teaching, and public presentation of history.” 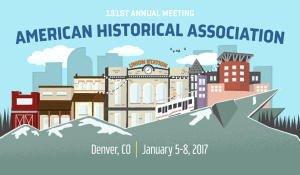 Speaking of scale: Denver is home to the largest Mongolian population in the United States, much of the Mountain West’s best food and music, and more than its share of the world’s most breathtaking landscapes. Consider this an invitation from a seasoned local, a proud graduate of Denver’s oldest high school. Susan B. Anthony visited my city in 1895. Alas, with no Fitbit, we have to rely on the recollections of just how she journeyed from friend and fellow-agitator Elizabeth Cady Stanton: “We’ve traveled West, years together, \ Day and night, in stormy weather.” They used “sleighs, ox-carts, and coaches,” whereas you’ll arrive by car, air, or train. However you travel, we look forward to welcoming you.

Sarah Fenton was raised in beautiful Denver, Colorado, and has since taught American history and literature at Lake Forest College, the Newberry Library, and Northwestern University, where she earned a PhD in history in 2005. Sarah moved to London in 2006 and became a contributing editor to the American Historical Association. She is currently finishing a book on American literature and the Civil War, and is the consulting editor for 30 Second New York.