From the National Coalition for History , News

From the National Coalition for History: Federal Funding for History Holds Steady

To the right is a chart showing funding trends over the past three fiscal years to provide historical perspective. Across the board, our programs generally were either level-funded or received small increases this fiscal year compared to last. Funding has become a constant issue in recent years, but the fact that our interests survived intact should be considered a victory in this budget climate. Here are some highlights: 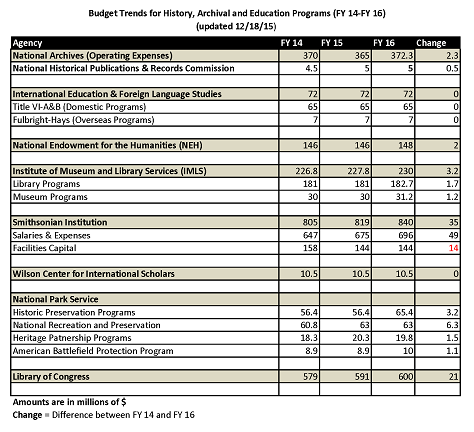 Of particular note is level funding for the National Historical Publications and Records Commission (NHPRC). The original appropriations bill considered in the House Financial Services and General Government Appropriations Subcommittee would have cut NHPRC’s FY ’16 budget by 40 percent from the FY ’15 level of $5 million to $3 million. This crisis allowed NCH to work with the contacts gained from the History Caucus, and the cut was rescinded at the House Appropriations Committee markup. The NHPRC was the only program in the entire bill to have funding restored. The National Archives and Records Administration (NARA) received $7.3 million in its operating expenses budget.

In addition, level funding for the Title VI and Fulbright-Hays International Education programs should also be considered a major accomplishment. In August, the Senate Appropriations Committee approved a $25 million (35 percent) reduction for these programs. We worked closely with our allies at the National Humanities Alliance and the Coalition for International Education to successfully advocate against these potentially devastating cuts. In the omnibus FY ’16 budget both Title VI ($65.1 million) and Fulbright-Hays ($7.2 million) received level funding.

Funding has been a constant issue in recent years, but the fact that our interests survived intact should be considered a victory in this budget climate.

The National Endowment for the Humanities (NEH) received a nearly $2 million funding increase, to $147.9 million. This amounts to the first increase in the NEH’s budget in the past six years.

The Historic Preservation Fund at the National Park Service received a $9 million increase. However, $8 million of that funding is dedicated to a new grant program to preserve Civil Rights Movement historic sites.

In February, the FY ’17 appropriations process begins anew. NCH and the historical community will have an additional challenge in ensuring that the new K–12 history and civics education programs that were authorized in the Every Student Succeeds Act are fully funded in their first fiscal year.

Lee White is executive director of the National Coalition for History.