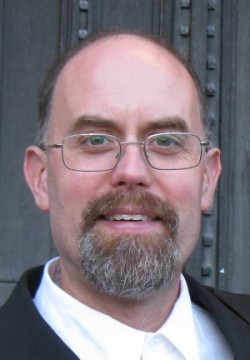 Mark Dickens is a contract academic teaching staff (i.e. adjunct) at the University of Alberta. He lives in Edmonton, Alberta, and has been a member since 2012.

Fields of interest: Central Asia and the Middle East up to 1400; the Turkic world; Steppe nomads; cultural and economic exchange on the Silk Road; Syriac Christianity; Eastern Christianity; Muslim-Christian relations

When did you first develop an interest in history?
As a child, I was always fascinated by history. I loved to spend hours reading the World Book encyclopedia, moving from one article to another ad infinitum. I remember seeing an exhibition of Egyptian artifacts at the British Museum when I was 11 and coming away wanting to become an Egyptologist.

What projects are you currently working on?
An Italian colleague and I are planning to produce a catalogue of Christian gravestones in Syriac script dating to the 13th and 14th centuries from the “Seven Rivers” area (Russian Semirechye, Turkic Yeti Su), now in Kyrgyzstan, which were discovered in the late 19th century. A Dutch colleague and I are hoping to do the same with a smaller corpus of Syro-Turkic Christian gravestones from Inner Mongolia. Two other projects in process are a translation and commentary on a section from the medieval Syriac Chronicle of Michael the Syrian on the origins of the Turks and subsequent arrival of the Seljüks in the Middle East and an edition, translation, and commentary on Syriac biblical manuscript fragments in the Turfan Collection in Berlin.

Have your interests evolved since graduation? If so, how?
Yes, they have, mostly through the necessary broadening of one’s knowledge that is involved in teaching, but also from the intellectual curiosity that arises from dealing with geographic and religious spheres that are by nature intertwined with adjacent regions and religions. Thus, from an initial concentration on Central Asia, my interests have necessarily expanded geographically into China and the Middle East. There has also been a parallel expansion of interest in Syriac Christianity to other forms of Eastern Christianity (e.g. Ethiopian, Coptic, Arabic and Armenian). Studying Christianity in these areas also requires a familiarity with other religious traditions, notably Zoroastrianism, traditional Turkic shamanism, Buddhism, Manichaeism, and Islam.

Is there an article, book, movie, blog, etc. that you could recommend to fellow AHA members?
When I recently taught a course on Chinese-Inner Asian Interactions from the Xiongnu to the Mongols, I showed a 2005 BBC TV production Genghis Khan (easy to find on YouTube) that I think does an excellent job of painting an intriguing and nuanced picture of this great Asian conqueror, based largely on The Secret History of the Mongols. Filmed on location in Mongolia and Poland, it is well acted by Mongolian actors speaking Mongol throughout (with voiceovers of course) and does an admirable job of bringing history to life with plenty of material for classroom discussion, including the role that indigenous primary sources can play in reconstructing the past.

What do you value most about the history profession?
Studying and attempting to reconstruct the past is both valuable in itself and for what it can help us to understand about the present. Of course, the value of history is far more than whether or not we can “learn lessons from the past” but at the same time there are lessons to be learned that can benefit individuals and societies today. Perhaps more importantly, the skills which historians acquire in their training and ongoing work (e.g. searching archives, analyzing written sources, constructing arguments, cross-referencing what others have said or written about the same topic and then communicating findings to a broader audience) can be applied in so many areas of life. Historians arguably have significant potential to be engaged and active citizens who can contribute to making the world a better place. Although this sounds like a tired cliché, surely it is something worth investing our lives in.

Why have you continued to be a member of the AHA?
Being part of AHA is important to me because it keeps me connected with my tribe, with the people who share a common conviction that history is important and that the skills we use on a regular basis as historians are things that our society needs. The fact that AHA was one of the first learned societies to start taking seriously the plight of adjuncts is also important to me. Finally, I find nearly every issue of Perspectives on History to be full of interesting reflections on what it means to be a historian—I read most issues cover to cover.

Other than history, what are you passionate about?
Spending time with my family in the outdoors (camping, hiking, cross-country skiing), photography, and music (playing and listening to it).