Most people recognize the distinctive visual iconography of steampunk, which has made steady inroads into film, television, and music videos since the late 1990s. Gears, goggles, vests, corsets—these and many other modified and imagined brass gadgets are among the sepia-toned hallmarks of what some have called “neo-Victorian futurism.” 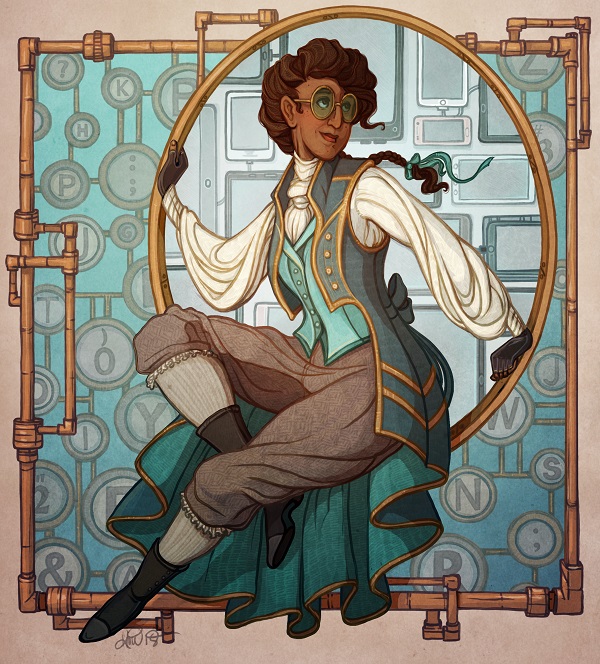 But steampunk also has a wider countercultural presence. Steampunk literature has grown so vast that it has developed its own subgenres, from alternate histories and social commentary to graphic novels and erotica. There are steampunk bands, and steampunk conventions draw thousands of people annually to far-flung cultural centers such as Atlanta and Seattle, as well as to less likely locales such as Bloomington, Indiana, and Lafayette, Louisiana. Steampunk also has an international footprint—the French, in particular, have a thriving steampunk community, including a theme park in Nantes. Steampunk can figure as literary trope, DIY craft, or mainstream fashion. Moreover, besides its striking visual characteristics, we might also consider steampunk a novel and popular way of “doing” history.

Those who sneer at steampunk often emphasize the moment when the corporate mainstream temporarily commodified the movement’s aesthetic.

Defining steampunk is difficult, however, eluding even committed practitioners. To some, it is primarily an underground movement, perhaps with anarchist leanings (hence, the “punk” in steampunk). Detractors often dismiss it as an ephemeral consumer trend. American studies scholar Rebecca Onion has referred to steampunk as a “multitextual aesthetic,” an empty mold into which any number of things can be poured, depending on the purposes and ideologies of those who employ it. For many of its subcultural advocates, steampunk’s shrewd juxtapositions of disparate historical contexts with speculative or adapted technologies serve as “ethical spectacles” that represent resistance and transgression in the present. In this way, studded leather corsets worn on the outside of steampunk women’s clothing become weaponized assertions of self-assured sexuality even as they also allude subversively to the garment’s literal imprisonment of bourgeois women’s bodies during the 19th century.

Steampunk has its critics, ironically including some of its literary paragons. This adds to the problem of defining the movement satisfactorily. Even William Gibson—co-author of The Difference Engine (1990), a dystopian alternate transnational history of the Victorian era—has evinced skepticism about the nature of the genre. “Steampunk strikes me as the least angry quasi-bohemian manifestation I’ve ever seen,” he has said. “There’s no scary steampunk.” Yet Gibson’s novel, widely acknowledged as a foundational steampunk text, ends with a mechanical (not digital) computer achieving sinister sentience as a social panopticon. Similarly, China Miéville’s Perdido Street Station (2000), which many consider to be the quintessential steampunk novel, takes place in the horrifying Dickensian city of New Crobuzon, a thinly disguised 19th-century London. However, Miéville himself insists he had only a vague notion of what steampunk was when he wrote it, and he politely distances himself from its categorization as such.

Steampunk’s lengthy history might help to characterize it. Jules Verne and H. G. Wells are commonly cited as its earliest progenitors, but its name comes from a letter that novelist K. W. Jeter wrote to Locus in 1987. This demarcates the “first wave” of American steampunk. During the 1990s, it remained a tiny fanboy culture based mainly in science fiction and graphic novels. The far more interesting “second wave” of steampunk, especially the emergence of a countercultural community, began around 2006—perhaps not coincidentally, soon after the appearance of the iPhone, a now-ubiquitous device that typifies the opaque, inaccessible, and depersonalized nature of today’s consumer technologies. By 2013, an IBM study based on quantitative and demographic analysis of social media posited that steampunk was the “next big thing.” Around the same time, pop star Justin Bieber co-opted steampunk style for a Christmas music video, and a national Prada campaign featured celebrities like Willem Dafoe in steampunk-inspired garb. Those who sneer at steampunk often flatten out its history and emphasize this moment, when the corporate mainstream temporarily rebranded the movement and commodified its aesthetic. But this attempted “conquest of cool” did not last long.

In “second wave” steampunk, its literary manifestations (such as Cherie Priest’s popular Clockwork Century series) became less important than the artisanal ethos that is the backbone of the movement today. Far more than a niche genre of science fiction, steampunk is now a decidedly material culture. Its fashions echo Romanticism’s late 19th-century heirs, the unconventional dandy aesthetes epitomized by Oscar Wilde (a socialist who once quipped that “the one duty we owe to history is to rewrite it”). Self-fashioning cosplay and the corollary creation of steampunk personas (“steamsonas”) constitute the core of the subculture’s performative nature. In Diana M. Pho’s words, steampunks use elaborate costumes, prosthetics, and other accessories to become “performing cyborgs”—beings whose lived aesthetics literally embody political critiques. Pho herself, Jaymee Goh, and Steampunk Emma Goldman (Miriam Roček) are a few of the women, often predominant in steampunk communities, who have actively embraced these performative aspects of steampunk’s “ideology of style” in oppositional public contexts like Occupy Wall Street.

Along with clothing, thousands of second-wave “makers” around the world (as evidenced on Etsy.com) create jewelry, accoutrements, and a wide variety of gadgets, especially through the antiquing—or “modding” (modifying)—of disposable, mass-produced goods, such as Jake von Slatt’s famous steampunked desktop computer. Objects like these highlight how steampunk’s relationship to the postindustrial world exhibits some parallels with the politically tinged Arts and Crafts movement’s relationship to the Industrial Revolution. But, as the founders of Steampunk Magazine insisted, this DIY ethos is not a “reactionary, dressed up nostalgia.” It is instead a form of protest against the closed nature of dominant postindustrial technologies with cold, sterile designs that evade nonspecialist comprehension and that decidedly exclude tinkering.

As steampunk evolved through the 2000s, its politics and vision of history did, too. In a widely circulated 2010 blog entry, science-fiction author Charles Stross wisecracked that steampunk “is nothing more than what happens when goths discover brown”—a memorable turn of phrase—but also railed against what he called “the totalitarian urge embedded in the steampunk nostalgia trip.” Yet when he wrote, Stross was surely aware that steampunk had been maturing into a subculture with a more explicitly progressive political edge than ever before. Especially since the radical collective Catastrophone Orchestra founded Steampunk Magazine in 2007, steampunk had increasingly accentuated its multicultural, postcolonial, and anticonsumerist dimensions. So although there are certainly some apolitical “fellow travelers,” steampunks are not Victorian equivalents to Civil War reenactors. Instead, it is more accurate—and even definitional—to regard steampunks as reimagining the past and its speculations about possible futures in order to envision a different present and better future from today’s perspective. Even John Clute, the eminent literary critic of speculative fiction who expressed reservations about the genre and its associated subculture, acknowledged these complexities when he wrote that “the link between steampunk and history is a dialectic; it repudiates.”

This subtlety may be lost on historians. Steampunk’s obviously Victorian visual cues superficially evoke the era’s imperialism, racism, and sexism, as well as an arguably naïve fascination with technology. Some historians, then, might also infer in steampunk an innately positivist conception of history. But this would elide the degree to which its most committed practitioners consider it a form of technological disruption and political protest. Questioning “Progress,” especially as subsumed under the supposedly neutral umbrella of science and technology, is precisely what the editors of Steampunk Magazine had in mind when they declared in their inaugural issue that they were “colonizing the past so we can dream the future.” Even Verne and Wells, despite their racist and imperialist trappings, crafted cautionary tales about the hubris of technological mastery. Moreover, criticisms of steampunks’ ostensible positivism also brush over their highly intentional juxtapositions of sartorial “chronotopes”—symbolic representations of time and space used to craft alternate identities in the context of their communities and in disputatious engagement with the world around them.

From pachucos and beatniks to punk rock and goth, 20th-century subcultures offered many opportunities to narrate history from the margins. But in 21st-century hypercapitalism, with the dominance of internet-based global media, such phenomena have become shorter-lived and their trajectories more diffuse. While it is difficult to know whether steampunk has already crested as a subculture, it has certainly demonstrated long-term mutability and persistence. It will probably continue to suggest many questions in various scholarly and political contexts—for literary critics, for feminists, and for postcolonial and queer theorists, among others. But historians should also take steampunk more seriously than they have thus far. If nothing else, it may help them evaluate the late Hayden White’s lament that, under postmodern conditions, “a virtual past is the best we can hope for.”

Scott P. Marler is associate professor of history at the University of Memphis, where he works on the history of capitalism. He also occasionally moonlights as Bartleby the Mad Abolitionist.