Pink-Collar Pain and Our New President

In the wake of this year’s presidential election, many of Hillary Clinton’s supporters are struggling to understand why her calls for sisterhood did not persuade the 62 percent of white non-college-educated women who voted for her opponent, Donald J. Trump.[1] One explanation came in Trump’s acceptance speech. In a 21st-century twist on Franklin Delano Roosevelt’s Depression-era appeal to the working class, the president-elect praised the “forgotten men and women” who hoisted him to victory. Many of these women are indeed the pink-collar workers the civil rights revolution forgot. 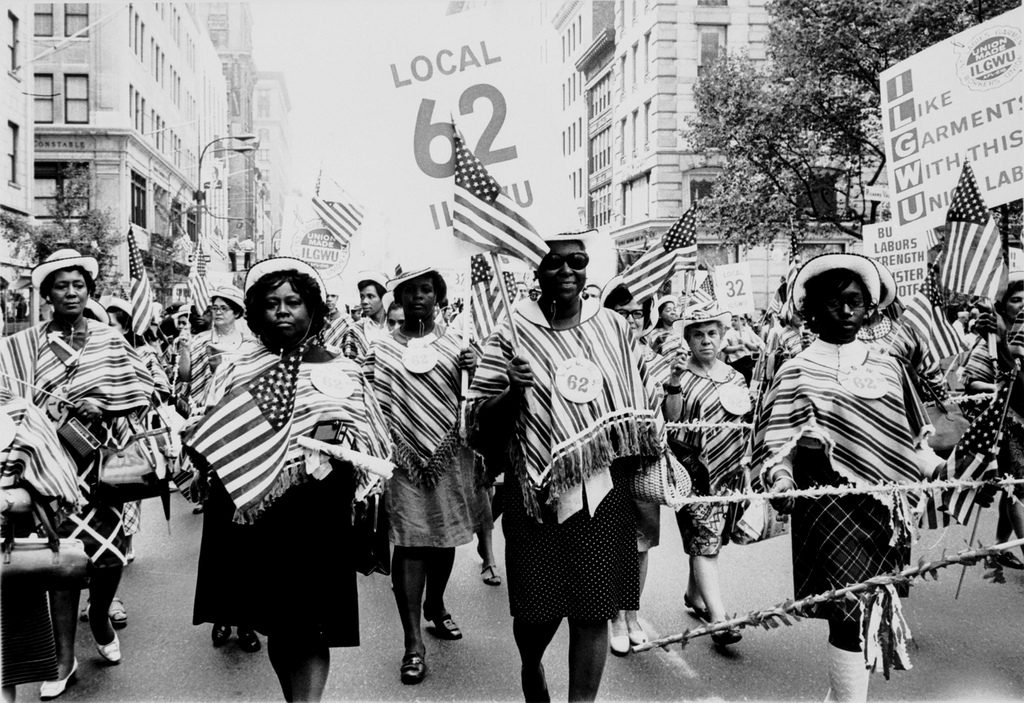 Members of the International Ladies Garment Workers Union Local Local 62 march in a Labor Day parade (date unknown). The Kheel Center for Labor-Management Documentation and Archives via Flikr (CC BY 2.0).

Since the passage of federal laws promoting workplace sex equality—especially Title VII of the Civil Rights Act of 1964—select female professionals have broken the glass ceiling while employers lowered the floor for everyone else. In particular, workplace rights laws have done little to help the pink-collar women stuck in contingent forms of labor that have historically been assigned to their sex. But in Title VII’s early years, the law’s ambiguity fostered demands that sex equality deliver substantive benefits. White-, blue-, and pink-collar women came together within their workplaces, built class action lawsuits, and pressured their employers and government officials. These workers argued that sex equality laws should boost women’s access to male-typed jobs while attaching those jobs’ higher pay, respect, and flexibility to the work most women already did.[2]

But these cross-class alliances broke down as they battled employer resistance, narrowing legal definitions of sex equality, and the ascendant New Right. Employers were more willing to accept a version of equality that permitted qualified women to advance than a broader mandate to restructure jobs and redistribute power to workers across the labor force. The conservatives who steered national politics in the 1980s affirmed this delimited definition of equality, assenting to women’s modest entry into male-dominated corners of the labor force. And as women professionals, including Hillary Clinton, eagerly crossed into those jobs, they struggled to transform a boys’ club that granted them only a tenuous foothold there.

These late-20th century conflicts over the meaning of sex equality compounded the discrete spheres of working class and more elite labor. Women are disadvantaged in both groups. Pink-collar women face poverty wages, inflexible and punishing shifts, little autonomy, and unsafe working conditions.[3] Female professionals must pursue the tokens of success as men have defined them, carefully managing their femininity and sacrificing gendered claims in order to be accepted in what remains a man’s world. Across the labor force, women’s access to power depends upon their willingness not to use that power to challenge the basic arrangements of work. 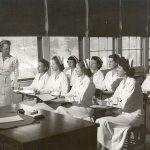 Nurses in the Navy attending class, 1940. Nursing is considered to be one among many pink-collar professions. Wikimedia Commons

This sharply divided system has offered far more to aspiring professionals than their pink-collar counterparts. In a labor force that remains structured by the sexist assumptions that once reserved good jobs for white men and dead-end, low-paying jobs for everyone else, working-class women have found their subordinate position re-naturalized under the banner of sex equality.

Elite women’s surprise that appeals to female unity did not deliver a Clinton victory manifests their misunderstanding of the distinct claims of the women who clean their homes, cut their hair, ring up their purchases, and care for their children. Women have never voted as a bloc in the century since the 19th Amendment extended suffrage to millions of them. One plausible explanation for this year’s divide is that white pink-collar women were less troubled by Trump’s approach to race than their African American and Latina counterparts and more persuaded by his self-professed economic populism.[4] But more elite women overlooked the concerns of their less privileged counterparts at their own peril. Even with direct pressure, President Trump is unlikely to do much to support working women of any race or class.

Now is a ripe moment to reject a narrow definition of feminism that reduces what began as a mass movement to a vehicle for personal mobility at work. Inspired by workplace feminism’s cross-class origins, American women should spotlight shared concerns and demand that Trump do much more for laborers than search for the blue collar jobs that were more likely automated than exported.[5] Bridging fractious identity politics, women must protect the gains of the past few decades and broaden their attacks on the forces that prop up the white, male breadwinner standard that has always excluded so many of us. 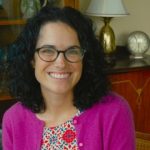 Katherine Turk is assistant professor of history and adjunct assistant professor of women’s and gender studies at the University of North Carolina at Chapel Hill. Turk received her undergraduate degree at Northwestern University and her PhD at the University of Chicago in 2011. Her essays have appeared in Labor: Studies in Working-Class History of the Americas (2014), the Law and History Review (2013), the Journal of American History (2010), and elsewhere.

Established by the AHA in 2002, the National History Center brings historians into conversations with policymakers and other leaders to stress the importance of historical perspectives in public decision-making. Today’s author, Katherine Turk, recently presented in the NHC’s Washington History Seminar program on “Equality on Trial: Gender and Rights in the Modern American Workplace.”