How can digital tools help historians make sense of the Ottoman world, with its 25 languages, 8 alphabets, and a timespan of over 600 years? This is the question posed by the Digital Ottoman Platform (DOP) project, a collaborative effort of scholars working to create, among other resources, a gazetteer of the Ottoman world. The gazetteer will be “an essential tool for studying social and spatial networks in the Ottoman realm.”

“Creating a Digital Gazetteer of the Ottoman World” will be presented as part of a panel on computational approaches to premodern Asian history at the AHA annual meeting in Denver next month. Taking networks as its organizational theme, the panel will cover topics that include social networks in 13th-century China, the intellectual history of the civil service in early modern Korea, and the maritime history of East Asia. 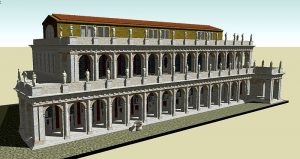 A 3D model of the basilica Aemilia in Rome, Italy, by artist Lasha Tskhondia. Explore how historians can use 3D modeling at AHA17. Wikipedia Commons

But to a great extent it is digital methodologies that are on display in digitally focused panels this year at the annual meeting. So, if you’re curious about 3D modeling or techniques for spatial history, there are papers from a range of different temporal and geographical contexts—from mapping and modeling medieval history to housing segregation in 19th-century US cities to many more from beyond the boundaries of the United States and Europe.

A number of panels and papers ask questions about how digital methodologies influence the stories we tell about historical change. As Laura Putnam wrote in the American Historical Review earlier this year, “That so many of us are now finding and finding out via digital search has significant consequences.” So whether you’re a digital historian or not, panels that explore the impact of digitization and digital exploration on our work would be good choices to put on your meeting itinerary. For example, a panel on 19th-century Brazil approaches the problem of studying history through a vast digitized newspaper archive. The Hemeroteca Digital Brasileira furnishes historians of 19th-century Brazil with an unparalleled resource, but also poses new methodological concerns. The papers in this panel mix history with historiography to focus on the form and function of the digitized archive along side the content of the news.

The panels on methodology are complimented by more activist forms of digital scholarship. In this time of widespread anti-immigration language, a roundtable on “Blogging on Borders” explores how we can use digital communication to create dialogue. There are many more digital history panels and papers across the temporal and geographical spectrum, as well as those that discuss digital pedagogy and the practicalities of doing digital scholarship.

Those who are interested in introductions to digital history should consider coming to THATCamp on January 4, and there are still a few spots left in the Getting Started in Digital History Workshop on January 5.