History, After the Election: Announcing the December Issue of Perspectives

On the cover of the December issue of Perspectives is a 1948 political cartoon about that year’s presidential election. Far less iconic than the photo of the victorious candidate holding aloft a newspaper headlining his loss—“DEWEY DEFEATS TRUMAN”—Clifford Berryman’s depiction of a gloating Thomas Dewey and an aghast Harry Truman was published about two weeks before the election. “Poll: All Over but the Shouting,” reads one of the notices Truman confronts. The cartoon foreshadows the data obsession and the complacency of many pundits of 2016. 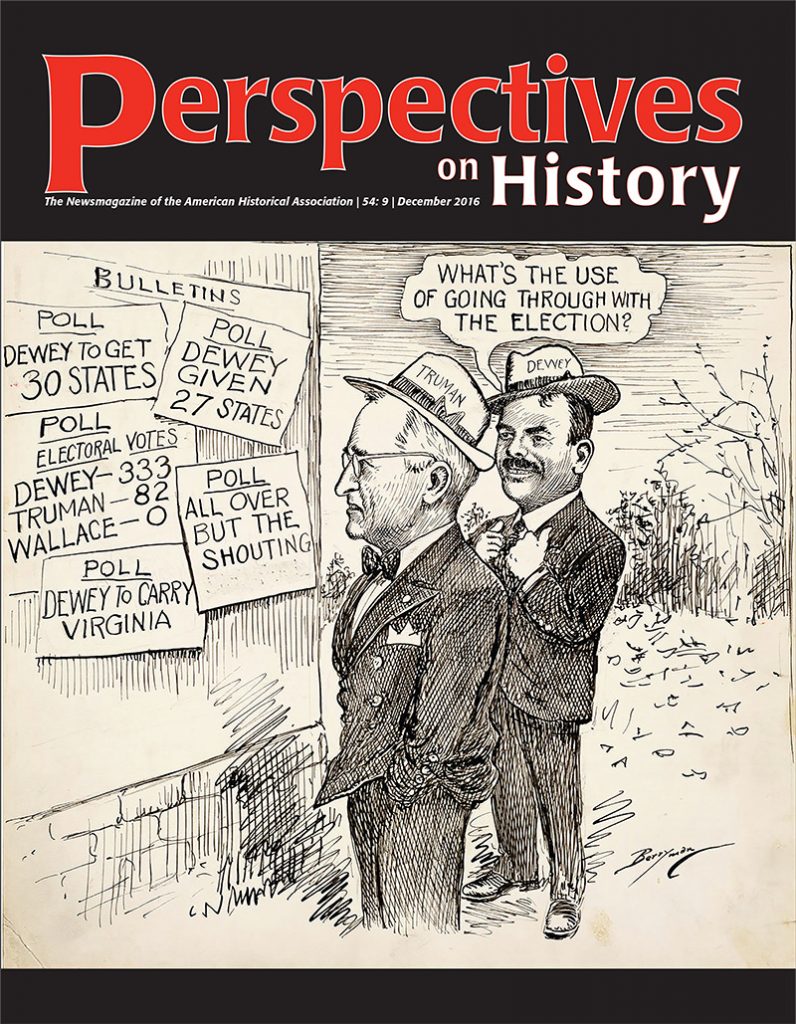 The Perspectives team was well on the way to closing our December issue on November 8. After the upset election of Donald Trump became clear in the early hours of November 9, it cast some stories in a new light. Candidate Trump’s promises to pursue an aggressive anti-immigration policy, including mass deportations, took a step closer to realization, buttressed by Republican control of both houses of Congress. The election provided a new context to two of our stories; though not specifically related to immigrants or immigration, they analyze the role of Latino/a ethnicity in education.

Yovanna Pineda’s “History and Belonging” argues that Latino/a students are eager to contribute to the discipline of history, if only they be taken seriously by academic gatekeepers. From her position as a professor of history at the University of Central Florida, Pineda narrates the experiences of some of her most talented Latino/a undergraduates who wish to pursue PhDs. Students like hers often encounter bias when applying to graduate programs, whether due to assumptions about their language ability or the prestige level of their graduating institutions. Encouraging Latino/a undergraduates to see themselves in our discipline’s future is critical, but that will include making them feel welcome in our classrooms and campuses. Soon, there may be a new form of “gatekeeping” at work.

In “A Textbook Case,” the AHA’s Kritika Agarwal examines the backstory of the proposed textbook Mexican American Heritage, which was submitted for adoption to the Texas State Board of Education (SBOE) several months ago and firmly rejected in November. With no evident expertise in Mexican American history, the authors promoted stereotypes of Mexicans and the Chicano movement. Historians and educators, including AHA members, formed a committee to persuade the SBOE to reject the book, and the AHA itself sent a letter of concern to the SBOE. But the collaboration of historians and educators goes back to Arizona’s ban on “ethnic studies” in 2010, part of a wave of hostility toward immigrants and Mexican Americans that predated Trump’s campaign. It’s likely that the future will bring additional collaboration between historians and educators to establish K–12 Mexican American studies in Texas.

The December issue offers much more. In “Cite Specific,” Roxanne Panchasi of Simon Fraser University explains a single lesson plan that imparts the basics of historiographical methodology for undergraduates: outlining a secondary source by analyzing the endnotes only. With guiding questions, small groups of students make outlines of the source’s argument and even guess at the title (with a great degree of accuracy). “Xtreme Endnotes,” as Panchasi calls the exercise, even inspired us to create a contest for Perspectives readers: the first to guess the classic work of history by looking at the endnotes we’ve pictured to illustrate the article will win their choice of AHA merchandise!

We’re pleased to have the University of Denver’s William Philpott contribute “More Than Meat and Potatoes” to our knowledge of food history. As AHA annual meeting attendees scramble to plan meetings at area eateries—please consult our online guide Dining in Denver, by the way—the history of the city’s food cultures will inspire ventures beyond steakhouses (though those are top-notch, too).

Other annual meeting–related content includes a to-do list of sessions for those interested in political history, a brief article about an open discussion session called “Historians for Mental Health” from AHA Research Division vice president Edmund Russell, and a note about an intriguing Denver custom you can witness near the Convention Center. We won’t give it away, but it involves cattle.

These are only a few of the standout articles in the December Perspectives. As the semester comes to an end, we hope you’ll find time to unwind before we see you at the annual meeting. Register before December 16, 11:59 pm EST for the discounted rate. Hope to see you there.