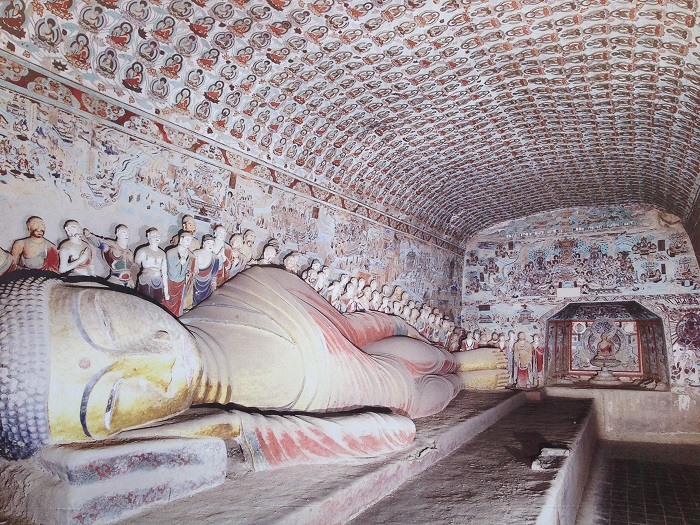 How do you look after a unique, irreplaceable, and fragile historic site that has over 2,000 sculptures and 45,000 square meters of painted murals, all of which are between 600 and 1,600 years old, while allowing access for both scholars and the public? This is the challenge facing the caretakers of the Mogao Caves, located in Gansu province in northwestern China. Part of their solution has been to digitally record and provide access to the site. But while digitization is necessary work, it is not sufficient on its own for either conservation or historical scholarship.

Also known as the Thousand Buddha Grottoes, this UNESCO World Heritage Site has 492 surviving caves that collectively contain a historical treasure unparalleled in scale and artistic and religious significance. The caves are located along the Silk Road, much of which crossed very inhospitable terrain; overland trade between China and the Asian and European countries to the west meant traversing deserts and vast mountain ranges. Oases were vital links in this network and served as fueling stations where travelers rested, purchased supplies, and fed and watered their pack animals. The oases were also places of commercial exchange—silk, of course, but also spices, gold, jade, and other goods. Trade was not limited to material goods only, however; these were also sites where people exchanged culture through art, religion, music, and ideas. Dunhuang, on the edge of the Gobi Desert, is one of the most remarkable of these oases. Because of its important strategic location on the trade routes, the city that grew up around the oasis was often fought over during its more than 6,000-year history. Amid this turbulence, one of the world’s most amazing cultural and religious sites thrived for over a thousand years.

Beginning in the fourth century, Buddhist monks started carving the Mogao Caves into a hillside above the Dachuan River, about 15 miles southeast of Dunhuang, leaving behind a valuable record of cultural exchange and Buddhist art. The first of these rock-cut structures were built as sites of Buddhist meditation. Over the next millennium, the place became a destination of pilgrimage and worship as hundreds of ornately decorated caves were built with sponsorship from local elites, rulers, and merchants. The paintings in the caves depict various aspects of Chinese life, and are evidence of syncretic religious evolution and cultural interaction between Indian, Turkish, Tibetan, and Chinese cultures. These caves played a major role in artistic exchange, and no other site provides such a full and long history of the evolution of Buddhist art and culture.

While digitization is necessary work, it is not sufficient on its own for either conservation or historical scholarship.

A large-scale effort to conserve the caves, involving scholars and practitioners from around the world, is currently underway. In addition to adopting scientific preservation methods and promoting strategies for sustainable tourism, digitization has been vital to this work. Digital imaging of the caves is an important tool for recording and understanding their history, and it goes hand in hand with work to ensure the survival of this incalculably significant cultural heritage site. The cultural heritage, historical value, and fragility of the site and its artwork, however, are only parts of the overall problem; important relics from the site are scattered around the world. In 1900, the caretaker of the site, a Taoist priest named Wang Yuanlu, discovered a hoard of over 50,000 manuscripts dating from the 5th to the 11th century walled up in one of the caves. While containing mostly Buddhist religious tracts, the cache from what is known as the “library cave” also included medieval Chinese administrative documents and other texts from around the world. Because of European interest in sinology at the turn of the century, many of these documents were dispersed and are currently held in museums and archives in more than half a dozen countries.

Digitization and Internet-based collaborations are vital for studying the caves and associated artifacts. The International Dunhuang Project has cataloged all of the dispersed manuscripts found in the “library cave,” thus providing better access to scholars. The Mellon International Dunhuang Archive project is also creating digital versions of all of the documents, which will be linked to the catalog. This work will result in an expansive resource for studying the caves and their contents, and it mirrors one of the central goals of many web-based digital archives, which is to reunify dispersed materials. Using digitization and web-based digital archives to reunite materials separated by time and the vagaries of collecting practice has scholarly benefits while simultaneously filling preservation aims. It creates a record that is independent of the original, while also providing the means to do research more efficiently and effectively across collections.

But such reunification is not without its limits and problems. In addition to funding the digitization of the dispersed documents, Mellon is sponsoring the Digital Dunhuang project, which has created almost 1 million images of over 100 caves, murals, and sculptures. By the time the work is complete, photographers will have generated over 4 million images. This presents significant challenges for scholars wanting to study the caves and their artwork. This is where metadata and scholarly data management practices come in. Making millions of images useful to scholars requires a robust system of persistent, linked, discoverable digital objects. Data creation and management frameworks that allow scholars to discover and study these objects are vital to ensuring that scholars can get the greatest research value out of the digitization efforts. Persistent identifiers—unique and unchanging references—for each of the caves and objects within the cave are prerequisites for further work. They can allow scholars to find, explore, and annotate images to advance the scholarly conversation about the caves and their artifacts. This infrastructure also allows users to link texts and scholarship about the objects to the digital surrogates themselves, thus providing ways to study the caves that are available only in the digital environment.

Digitization that can aid preservation and provide access has become central to how cultural sites such as the Mogao Caves are cared for, but the demands of scholarship are different from those of more casual potential users who may just want to see the artwork. The scholarly conversation relies on being able to make arguments based upon objects and elements within the images. While the creation of millions of high-quality images is of value, the needs of scholars require further digital infrastructure to allow for annotation, description, and identification. Sharing these assertions enables collaboration and the building of knowledge about the artifacts. Making best use of this invaluable cultural and historical resource requires much more than digitization.