Inspiration and Perspiration: A Sculptor Reflects on His Historical Method

Memorializing people, events, and ideals in sculpture requires a unique historical approach. Sculpture is painting with light—including sunlight that modifies our perspective hour by hour, as well as the light the artist shines on intriguing features of the subject. My approach to permanent bronze memorials aims to inspire viewers, provide insights into the subject, and maintain historical accuracy, all within an accessible aesthetic design. I believe this can enhance citizens’ knowledge of and passion about achievement, their country—their democracy, in our case—and civilization itself. I take seriously the idea that meaningful and artistically successful memorials can inform and appeal for centuries.

To me, representational sculpture usually is better suited to inspiring viewers and prompting questions for further exploration than is abstraction. Successful figurative sculpture is about the subject; unfortunately, many examples of abstract sculpture are about the sculptor. Skeptics may argue that representation is merely static description. On the contrary, an excellent piece is invested with the essence of the qualities that made the subject reflect human excellence, character, brilliance, or even an embodiment of evil. Representation provides a jump start for viewers’ curiosity and emotions, rather than ephemeral engagement or amusement. Ultimately, figurative content and aesthetics appeal naturally to fundamental humanity. This philosophy guides my artistic process.

My collaborator Eugene Daub and I have created representational memorial subjects that include Rosa Parks, Thomas Jefferson, Abraham Lincoln, the Tuskegee Airmen, and Harvey Milk, among many others. In every case, I have conducted extensive research into the subject, drawn conclusions, and worked with my partner to devise a representation that goes beyond a rigid portrait. The research includes secondary sources, examination of artifacts, site visits, interviews, discussions with museum curators, and, in one case (Harvey Milk), a survey of people to measure public knowledge and impressions of the subject.

Immersion in each subject is thoroughly enjoyable, for reasons familiar to all students of history. In replacing superficial impressions, data sometimes point in contrary directions; widely accepted interpretations can be proved patently false (or perhaps truer than skeptics would like to admit); local versions of historical narrative may differ from national ones; and feelings of inspiration can exist long before specifics of a design are even considered. Passionate engagement in the subject is imperative for the result to be worth the effort.

And the effort is considerable. The proposal (or both proposals, if one was submitted in a preliminary round) often consumes more than half of the entire project labor, not to mention prodigious emotional and physical energy. History, geometry, aesthetic design, modeling, landscape models, budgeting, and project optimization all precede full-scale sculpting, which happens only if a competition is won. Post-sculpting production entails many more collective hours of labor, involving engineers, artisans in the foundry, specialized suppliers, installers, and others. Projects typically last for years.

Background reading is essential. We created the Rosa Parks memorial that is now in the National Statuary Hall in the United States Capitol. Not surprisingly, research revealed much about Mrs. Parks (as she preferred to be called) that is at variance with some popular assumptions about her and her activities. People with substantial knowledge of the civil rights movement are well aware of much of this, but most are not. Some people assume that her bus-seat protest was planned by a civil rights organization. To the contrary, Mrs. Parks states in her autobiography that her resentment was decades in the making, and that her refusal to move was a spontaneous reaction to the immediate provocation of being told to relinquish her seat. It was definitely not a result of exhaustion from her workday. This realization reinforced our commitment to depict her inherent courage.

Research also revealed that Mrs. Parks had a deep and rigorous background in civil rights history. She had refused to give up her seat years before. Others had done the same but had not put forward a virtually unassailable public image that could be effective in the movement. As an NAACP documenter of racist incidents in Montgomery, Alabama, Mrs. Parks knew as much about segregation’s virulence there as anyone, and more than most; she was actively engaged in the struggle for the rest of her life. In addition, building on earlier research for other monuments, I studied African American history from 1619 to the present. The finished sculpture design incorporates essential foundations underlying all of this history. Mrs. Parks is ensconced in rock: a solid foundation made of centuries of slave rebellions, courageous escapes, abolitionism, and civil rights activism; she is turned to one side as she turns her back on Jim Crow; and her face shines with intelligence, determination, and courage. She will not move.

The dedication on February 27, 2013, 23 days after Mrs. Parks would have turned 100, was exciting personally and marked by joyous ceremony. We were introduced to President Obama a few minutes before. At the crucial moment when the president, congressional, and civil rights leaders pulled the drape from the statue, the president turned toward us, applauded, and mouthed the word “Good.” Mrs. Parks’s brother’s family was present and also thanked us graciously. Despite all this, the process was not complete until I wrote and received approval of a 90-page final report—elaborately hardbound for the archives—concluding a five-year-plus effort. 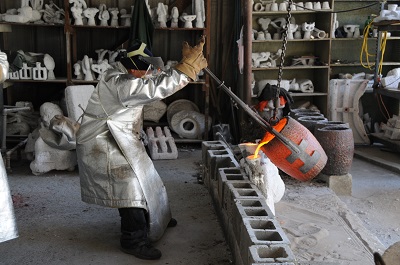 Material culture is also important to us. Research for Thomas Jefferson, Father of the University of Virginia began with three months of seven-day weeks seeking perspective not just on the character of the man in his later years and details on his appearance, but also on the look and feel of character-revealing objects relevant to his depiction. Jefferson’s letters and those written by visitors to Monticello during his lifetime provided excellent details, including that he looked 60 when he was 80. We gained access to his sherryvallies (riding chaps) from the Museum of Natural History of Los Angeles County and other items at Monticello, including his boots and objects he kept in his pockets that symbolized his interests. The final design depicts him as vigorous, in a strong stance, with accurate renditions of what he was likely to have worn, holding his two-sided 1814 architecture plans. Most important, the composition depicts him at a critical moment on July 18, 1817, when he realized the wisdom of placing a monumental building at the north end of the grounds, which he had just finished surveying with his theodolite. The building became the renowned Rotunda.

When we research, we look for clues about our subject’s character. Our Lincoln as a Young Boy sculpture, near Abraham Lincoln’s birthplace in Kentucky, is composed for visitors to see three primary aspects of the 16th president as a child: his hardscrabble origins, his compassion, and his nascent intellect. His clothes are well-worn, he is barefoot, he and his fishing pole lean against a tree like those that lined the edges of his father’s field, and his satchel of freshly picked corn hangs on it. Honey, the dog he mercifully rescued from an abuser, sports the splint Lincoln put on its leg and observes the boy holding the Webster’s Elementary Spelling Book used at his blab school. The book is open to the morality tale of two dogs. He is positioned to gaze across the town circle into the face of the 1911 Adolph Weinman sculpture of himself as president. And, of course, its location refutes the popular assumption that he was born in Illinois.

Some of our memorials lend themselves to direct interaction with history: several designs incorporate complete landscapes to lead visitors down a history path. Our Harvey Milk bust (capturing his personality by violating a traditional taboo on sculpting smiling faces) is positioned as the overseer of thousands of weddings in San Francisco City Hall. Perhaps most rewarding, the Lincoln is small and sits at ground level, so that people—children in particular—can climb on it, pet Honey, and read the open pages in his spelling book. One boy gathered a group of adults around the sculpture after the dedication and regaled them with a detailed lecture on Lincoln’s childhood.

Public art can have deep meaning for the public it serves. It can move people emotionally and initiate intellectual curiosity about human history. Rigorous research that informs design, when sculpted aesthetically, attracts positive attention and leads at least a number of its visitors down new paths of passion, inquiry, and perspective.

Rob Firmin holds a PhD in demography from the University of Chicago and is a public art sculptor focusing on inspirational historical subjects. A current independent project will honor Ohlone Indians. He is also an inventor and published statistician.