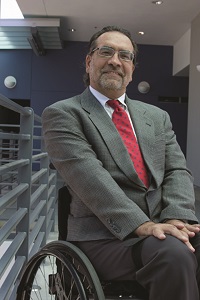 DelGaudio was born and educated in Southern California, graduating from Los Angeles Valley College and California State University, Northridge; he received his PhD in history from the University of California, Irvine, in 1987. His doctoral dissertation, directed by John Diggins, focused on the career of Austrian economist Ludwig von Mises. Working as a federal government historian for the US Air Force, Julian produced several studies on US ballistic missile programs and military space programs. After teaching history courses as an adjunct for several years in Southern California, he found a full-time academic career at Long Beach City College.

DelGaudio always felt fortunate that he had found a full career, and invigorated that confidence by participating in every aspect of college life. He taught a full spectrum of courses, from basic transfer requirements to seminars that probed for the meaning of American society. He felt that students should be exposed to the diversity of experiences that comprise the political and social reality of the United States.

He eagerly sponsored several student organizations, including the Campus Progressives, the Vegetarian Club (although he was a determined omnivore), and the campus Gay Straight Alliance. With several colleagues, DelGaudio began the Long Beach Community Studies Project, encouraging students to examine their community through the lenses of history, anthropology, and allied disciplines. Whenever a student arrived at his office door, DelGaudio offered a sympathetic ear. He encouraged students to aim high, proceed with their education, and go as far as they could, and they flocked to him.

DelGaudio was a polymath, always intrigued by important ideas that crossed his academic vision. “He bristled with interesting ideas,” one colleague remembers. He was one of the first faculty members to experiment with role-playing simulation courseware, designed to increase his students’ understanding of Native American and settler interaction during the colonial period. He later developed courseware focused on slave narratives and intercultural understanding. Julian participated in professional organizations, including the AHA, Historians against the War, and local history groups, contributing dozens of book reviews for history journals and attending and presenting at professional conferences.

His academic work led to his involvement with such local organizations as the Historical Society of Long Beach, where he became a member of the board of directors and an important contributor to the development of the society’s exhibitions. He was working on the proposed December 2016 exhibit Long Beach Remembers Pearl Harbor and encouraged students to become involved in historical work in that city. His last project was a study of Long Beach in the 20th century, exploring its evolution from a small coastal community to a major force in world commerce by the 21st century, utilizing community records, newspaper accounts, personal correspondence, and voluminous records from the National Archives and Records Administration repository in Riverside, California. The manuscript for that project is in progress.

His interest in social justice issues led him to bring to campus groups focused on issues as diverse as environmental problems in Southern California, the living wage campaign, the integration of the immigrant communities in Long Beach, and the future of local urban development. Students were always involved in the organization and management of these events. He and his wife also helped to reactivate the local chapter of the American Civil Liberties Union over the past few years.

DelGaudio was a man for all seasons. His interests varied, while his love of life, family, and education was as immense as his generous spirit. He leaves a cherished wife and adored children and grandchildren, as well as students and colleagues who will miss him greatly.