It is not surprising that history students view science and medicine as essentialist disciplines. Nearly every branch of modern Western history can offer disturbing examples of doctors and scientific experts categorizing humans into essential types. Nazi doctors promoted and “proved” the inferiority of non-Aryans through brutal experiments; Victorian craniologists correlated the size and shape of African, Asian, and American skulls with congenital stupidity; Harvard professor Edward Clarke explained in 1873 that women were inherently unfit for higher education because they menstruated. As recently as 2007, James Watson, one of the discoverers of the structure of DNA in 1953, stated that he was “gloomy” about the African continent’s prospects, as its people were inherently less intelligent than Europeans. The list could go on. 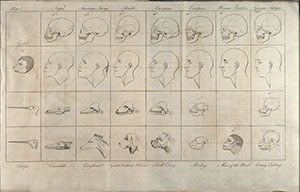 Many of us may have found that these and other examples of scientific essentialism provoke animated classroom discussions. Students recognize how experts from the “scientific revolution” forward have presented themselves as authoritative, capable of making universal claims about human nature, often on the grounds of selective, even anecdotal evidence. It’s easy for students to understand that essentialist arguments in science and medicine have reflected contemporary beliefs about race, gender, sex, and other categories, consequently reinforcing hierarchical power relations. As a result, essentialism in science and medicine provides some especially vivid stories to demonstrate the working of ideology—a worldview that seems natural and therefore true.

Yet it is all too easy to invoke scientific essentialism in such broad terms that it serves as a straw man with little historical specificity or nuance. By lumping together all disagreeable claims about race, gender, sex, and other human categories as essentialist, we are in danger of treating all “-isms” as operating the same way. Not all essentialism was and is the same. Simply put, we should not essentialize essentialism, especially if we hope to challenge it in contemporary conversations and policies.

It is helpful to consider where the term essentialism comes from in the history of science. Ernst Mayr, the 20th-century evolutionary biologist and theorist, was the first to use the term, and he did so to characterize pre-Darwinian natural philosophy. He argued that all naturalists before Charles Darwin maintained a rigidly essentialist view of life in which every creature had been given its permanent place. Scholars have since shown that this is not what all naturalists and theorists argued. Eighteenth-century researchers, including Blumenbach, Buffon, and Lamarck, may not have identified natural selection or articulated the theory of evolution, but they recognized that life forms could change through various mechanisms, including interbreeding.1

Early naturalists were intrigued by human differences and the apparent essential traits that distinguished one group from another. Though skin color was later considered a key racial trait from the 19th century forward, this was not always so. (“Blood,” for example, was of more interest and importance in the early modern period, especially for the Spanish and Portuguese, and then again for the Nazis and other 20th-century racists.) Some early modern observers postulated that pigmentation was a mutable trait in response to a person’s environment rather than an inherent mark of difference. Transported from their hot, sunny homelands, those occasional African slaves with albinism or vitiligo appeared to prove that blacks could turn white when taken to the cloudy north. In the broader context of Enlightenment historical theories in which peoples were believed to advance or degenerate across different stages of civilization, the news that African skin could lighten implied that even “race” itself was alterable. In other words, not all theorists maintained what we would consider essentialist ideas about the natural world and human traits, including even race.

By the late 18th century, however, many of the most influential Western theorists argued that race was an immutable and essential trait. Manchester obstetrician Charles White (see illustration, page 23), like some of his contemporaries, stated that different peoples had permanent anatomical distinctions of such significance that they might actually be better considered different species. Humans could be ordered hierarchically from the small-brained (and therefore cognitively weaker) categories of “Negro,” “American Savage,” and “Asiatic” to the big-brained and clever “European.” (As for gender differences, White and other contemporary physiologists argued that most women had weaker mental abilities compared to men of their own race because their brains were typically smaller.) We might assume that Charles White’s essentialist ideas about race would mark him as entirely reactionary. Peculiarly, this is not so: he argued for the abolition of slavery and the humane treatment of all peoples, no matter their race or gender. Most historians have dismissed his abolitionist statements as insincere, but his work as a whole is worth pedagogical interrogation for it reveals the political complexity of essentialist arguments.

As scientists and doctors gained professional stature in the 19th century, those who promoted essentialism provided the natural evidence to exclude women, nonwhites, Jews, unwanted immigrants, and other marginal types from political, social, and educational opportunities. The increasingly intertwined relationships between essentialist science and eugenic institutions (from the Third Reich to the US Department of Health’s Tuskegee syphilis study) had catastrophic results, particularly in the first half of the 20th century.

Concurrently, however, there were growing numbers of scientists who refuted racial essentialism and biological determinism, from the early 20th-century anthropologists Franz Boas and Ruth Benedict to experts at UNESCO in the 1950s. By the beginning of the 21st century, most (but certainly not all) social and life scientists—including geneticists—have rejected genetic or biological explanations for differences within human populations. The majority of psychologists, sociologists, and life scientists have continued to argue that more recent essentialist claims correlating race with IQ, criminality, and poverty, as in The Bell Curve (Richard Herrnstein and Charles Murray, 1994), are less matters of genes than environment and social factors.

Whether our students agree with The Bell Curve or sharply reject it, they may well wonder how much science and medicine continue today to be driven by and supportive of essentialist ideologies. Some students will argue that science and medicine are still essentialist disciplines with nefarious ideological agendas, while others will insist that scientific essentialism no longer exists and is therefore an artifact of the past only. To work through these views with students, it is critical that we do not speculate about science and medicine today by extrapolating from either lamentable historical examples of essentialism or assumptions that The Bell Curve represents mainstream work in psychology, sociology, evolutionary biology, and genetics. Instead, when we incorporate the histories of science and medicine, we are obligated to learn at least a little about what these disciplines do and claim today (not just at their most horrific historical moments).

Despite the contemporary obsession with race and ethnicity on bureaucratic forms and in public discourse, it is probably surprising to learn that today few Western research scientists support essentialism. Anthropologists, evolutionary biologists, and geneticists may sometimes treat “race” as a category useful for categorization, but few of them argue that race exists as an essential biological trait with any determinist power.2

This is not to say that essentialism itself has disappeared from modern discourse and institutional policies—far from it, as revealed by recent political debates and new state laws in Arizona and elsewhere regarding immigration. Rather, we will not find evidence for essential racial differences in mainstream anthropology, evolutionary biology, human genetics, psychology, medical specializations, or other scientific fields. Perhaps this is the biggest surprise: today, scientists and social scientists are in greater alignment with humanists in the view that human diversity is better explained by social construction than biological essentialism.

Lisa Forman Cody is associate professor of history at Claremont McKenna College and the author of Birthing the Nation: Sex, Science, and the Conception of 18th-Century Britons (2005). She is completing a book on 18th-century women and human rights, and researching Alexander Hamilton’s West Indian origins.