When Atlanta residents returned to the city after the Civil War, they confronted destruction they had not thought possible. The story of Atlanta’s swift transformation to becoming capital of the New South has taken on legendary proportions, but the truth is that the change was not by any means a clean break with the past. Competing visions of the future emerged after 1865—some focused on a retrenchment of old ways under new guises, others on emancipation and equality. A white business elite reimagined Atlanta, but its members were not to retain exclusive sway over the rebuilding of the city, as African American southerners also grew in influence. This conflict was borne out on the landscape itself, and you can see its traces even today. 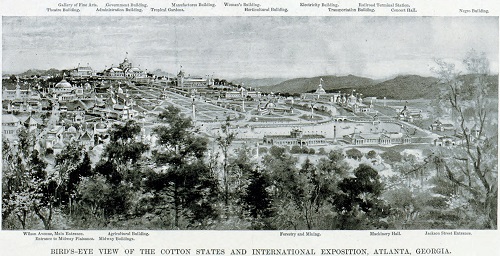 The three annual meeting hotels stand close to what was the antebellum central business district, which was devastated by the Civil War. City Hall survived, as did a handful of churches and several houses on Peachtree Street, but the destruction of pivotal railroad tracks left Atlanta without its economic lifeblood. Thus, the first rebuilding efforts focused on the railroads. During the 1870s, new businesses and homes went up on Peachtree Street, with the city’s elite white community settling north along the ridgeline. Over the course of the late 19th century, the elite business and residential district slowly migrated north along Peachtree Street, even while dominating the commercial, social, and political life of the rest of Atlanta.

The apotheosis of elite white Atlanta in the late 19th century was the Flatiron Building, at 74 Peachtree Street (a 10-minute walk from the Atlanta Marriott Marquis). Built in 1897, it is Atlanta’s oldest extant skyscraper, four years older than its famous New York City cousin. Its sheer size ensured that this monument to the city’s wealth and regional ascendancy would dominate the landscape around it: the physical manifestation of a new South that claimed to have shed ties to its antebellum past while maintaining racial hierarchies.

In contrast to this vision, two miles west of the meeting hotels stands Atlanta University, founded in 1865 by the American Missionary Association and the Freedmen’s Bureau to educate recently emancipated slaves. Gaines Hall (1869) was the first structure on the present-day Atlanta University Center Consortium campus. The building heralded an era of expansion in African American higher education. Today, the Atlanta University Center campus has the city’s highest concentration of 19th-century public and institutional buildings.

Other African American institutions changed history by repurposing the landscape, planting their legacies on former Confederate army sites in Atlanta. Spelman Seminary (later Spelman College), founded in 1881 by Sophia Packard and Harriet Giles in cooperation with the Reverend Frank Quarles, quickly outgrew the basement of Quarles’s Friendship Baptist Church and moved in 1882 to its present location at the former Fort McPherson barracks. In 1889, the Atlanta Baptist Seminary (now Morehouse College) moved from its overcrowded downtown location at Hunter and Elliot Streets to a site marked with Confederate army earthworks.

These two visions of Atlanta—one that endorsed the continued sway of white supremacy, the other embodying the promises of emancipation—came into direct contact during the Cotton States and International Exposition, held in 1895 at what is now Piedmont Park, two miles north of the meeting hotels. The buildings used for the expo are long gone, but the park and its landscaping remain.

One of the exposition’s structures encapsulated these contested meanings. Constructed by African American artisans, the Negro Building showcased the material and intellectual achievements of African Americans since emancipation. The exposition’s white organizers had their own reasons for providing a building for black citizens: doing so gave the organizers access to federal money and reassured northern investors that despite racially motivated violence and the rise of Jim Crow, white southerners had established peaceful relations with African American communities. In other words, the organizers intended the Negro Building to reinforce their vision of a South built on new economic models but based soundly on antebellum racial hierarchies.

Reminders of Reconstruction sneak up on visitors to Atlanta. The Flatiron Building suggests the ways that downtown was reshaped after the war. The Atlanta University Center campus provides a glimpse of the growth of an African American intelligentsia and the spaces provided for the incubation of the long civil rights movement. Piedmont Park prompts reflection on the opposing visions of the postbellum South—one based on equality, the other effacing its inequalities in hopes of economic gain. If you know where to look, you will find echoes of Reconstruction rumbling across the landscape of Atlanta.

Christianna Merry Huber is a recent graduate of Georgia State University’s heritage preservation master’s degree program. She is currently working as a library technical assistant for the Uprising of ’34 grant project, an audiovisualization and transcription project dealing with the General Textile Workers’ strike of 1934.