As a historian in Atlanta for the AHA annual meeting, you will no doubt sense the presence of one of the city’s oldest and most influential corporations, the Coca-Cola Company. Whether in advertising or the products themselves, Coca-Cola’s brands are conspicuous throughout their home city. The power of the company can be detected in the city’s physical landscape: from the corporation’s large campus along North Avenue; to its new downtown information technology offices; to the building that housed the company’s former museum in Five Points; to the new company museum, aquarium, civil rights museum, and neighboring park, all built on land donated or owned by the company on the former site of the 1996 Coca-Cola Olympic City.

Numerous institutions and locations in and around Atlanta have also been shaped by the Coca-Cola Company, including the airport, the arts center, Emory University, the Centers for Disease Control, and the various buildings and parks named after its leaders, not to mention the neighborhoods and businesses shaped by dealings with Atlanta’s Trust Company Bank, or the “Coca-Cola Bank,” as it was called because it was run by executives of the soft drink company. No wonder then that former mayor, William Hartsfield, who had once been the personal secretary to Coca-Cola CEO Robert Woodruff, called Atlanta “Coca-Cola City.”1 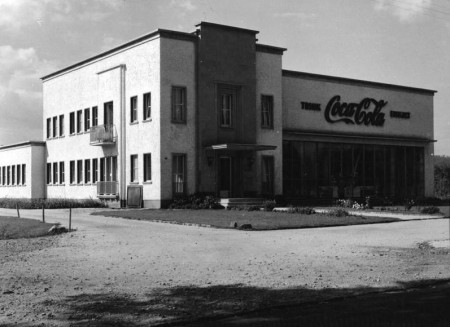 While nowhere near this scale, many metropolitan areas around the world have been shaped by the physical presence of the Coca-Cola Company. The company expanded globally by producing bottled drinks in local markets rather than exporting them directly from the United States, resulting in bottling plants and factories around the world. So, while Coca-Cola is deeply rooted in its Atlanta home (although officially incorporated in the corporate tax haven of Wilmington, Delaware), the company regularly exerted the logic of its franchise system to suggest that it was a local enterprise wherever it went. This required significant cultural work, and Coca-Cola’s mid-century international advertising came to rely heavily on images of bottling plants to situate the multinational company and its products as central to local development.

The Coca-Cola Company’s post-World War II advertising in international markets often featured these modern plants with gleaming glass bottles rolling off production lines or glistening with condensation as they emerged from electric refrigeration. As new plants opened in Colombian cities, for example, the Coca-Cola Export Corporation distributed a pamphlet illustrating its manufacturing to the surrounding community with a cover boasting, “Continuous Quality Is Quality You Trust.”2 With uniform Coca-Colas marching out of clean and bright factories, taglines promised “Always the Same Quality, Always the Same Taste.” To consumers, such ads suggested standardization of production and of product, both hygienic and modern, assured by industrialization and the Coca-Cola trademark.

Unlike the consumption-focused ads of “Coca-Cola girls” sipping Cokes, such production-oriented messages spoke powerfully to political and economic elites for whom the modernity expressed in Coca-Cola’s franchise logic of globalization suggested development possibilities for their countries. Such advertising visions drew on the Fordist promise of an efficient consumer capitalist economic model, with mass production paired with mass consumption by the same industrial workers who would labor and consume its products. The mass dissemination of these images themselves promised that demand would be spurred along by advertising, driving consumer capitalism continuously into a future without being plagued by past crises of over-accumulation and under-consumption. 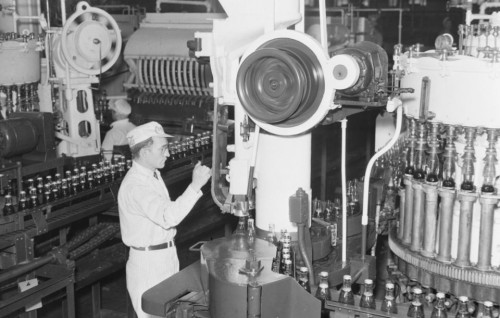 The Coca-Cola Export Corporation advised its bottlers in building large and architecturally detailed bottling plants that emphasized their status as models of modern production. The company and local bottlers celebrated grand openings of plants as events of major economic, political, and cultural significance featuring a host of national and local dignitaries. Since then, decades of aggressive restructuring and centralization of production have resulted in the closure of many of these plants—by the early 2000s, 11 of 16 Colombian plants had been closed—but their physical presence remains in the urban geography of cities around the world. Thus, the Coca-Cola Company’s buildings continue to have productive capacity beyond their walls, in their communication of the economic logics of their times.

In 2007, the Coca-Cola Company moved the museum commemorating the success of its globalization, the World of Coca-Cola, from its Five Points location. Its large monument to itself now sits empty in a neighborhood once targeted for development, as sights have shifted to other plans for corporate and urban growth. The state had hoped to turn the site into a Georgia state history museum, but funding has not come through the state budget. Instead, downtown Atlanta has become the focus of a different tourism-oriented development plan, anchored by two corporate museums—the new World of Coca-Cola and the CNN Center. It is more apparent now that the city has thrown its future in with its growing list of multinationals—it now ranks third of all US cities for most Fortune 500 companies3—which will, like the Coca-Cola Company, undoubtedly leave their imprint on Atlanta’s material history in the 21st century.

Amanda Ciafone has a PhD from Yale University and is an assistant professor at the University of Illinois at Urbana-Champaign. The Coca-Cola Company and the politics, cultural representations, and social movements around the multinational corporation, are the subjects of her next book.