The December 2012 issue of the American Historical Review will soon appear both in members' mailboxes and online. It includes an article on religiosity in 18th-century Mexico, an AHR Forum, "Histories of the Future," and an AHR Conversation focused on the theme "The Historical Study of Emotions." There are four featured reviews, followed by our usual extensive book review section.

In "The Supple Whip: Innovation and Tradition in Mexican Catholicism," Matthew D. O'Hara examines a religious movement that flourished in 18th-century Mexico, the Holy Schools of Christ (Santas Escuelas de Cristo). These groups combined collective piety sometimes associated with "Baroque" Catholicism, such as the lashing of flesh, with a desire for both spiritual and worldly improvement. O'Hara resists characterizing the Holy Schools as a moment of "hybrid modernity" or some other variation on the modernity paradigm. Instead, by focusing our attention on both the groups' activities and their writings, he reveals how innovation required tradition and thus how cultural practices during this period were often future-oriented without being "modern."

The AHR Forum, "Histories of the Future," offers three studies that explore how 20th-century planners, policymakers, and intellectuals conceived and thought about the future. In an introduction entitled "Histories of the Future and the Futures of History," David C. Engerman explores the tensions between the different levels of political analysis operating in the three essays. Specifically, he examines how each essay entails analysis of both geopolitics (visions of world order) and state politics (competitions over power to rule). He argues that the essays' key insights come from their interrogations of these two forms of politics. In the conclusion, he suggests that histories of the future need not be limited to politics, but could investigate the economic and cultural histories of the future as well.

In "The Great Future Debate and the Struggle for the World," Jenny Andersson traces the global struggle for future representations in the multifaceted field of prediction (forecasting, futurology, futures studies) in the postwar period. Focusing on the struggle between representations of the future based on the emergence of decisive forms of knowledge and those shaped primarily by the human imagination, the essay brings out a new aspect of political history in the struggle over the use of prediction. The actors involved in this struggle ranged from the RAND Corporation to the new social movements of the 1960s and 1970s, each with its own vision of the future of the world. The postwar period was marked by the emergence of the future as a domain of science and as a category of political action, and, importantly, as a central field of control and dissent. Andersson proposes a new approach to the history of the future that moves away from the cultural history of utopias and images of the future to focus on the role of prediction in structuring action and actors on the national, transnational, and global levels.

The political history of the future is still largely unexplored, even in such an important arena as predictions and planning for nuclear war. In "'General, I Have Fought Just as Many Nuclear Wars as You Have': Forecasts, Future Scenarios, and the Politics of Armageddon," Matthew Connelly, Matt Fay, Giulia Ferrini, Micki Kaufman, Will Leonard, Harrison Monsky, Ryan Musto, Taunton Paine, Nicholas Standish, and Lydia Walker suggest that one reason for this omission is that in committing so many resources to intelligence estimates, war plans, role-playing exercises, and technology forecasts, the national security state created an archive that could overwhelm the individual researcher. No less challenging is the problem of piecing together parts of the story that remain classified. The article therefore draws on the combined efforts of a team of researchers. Connelly and the other authors describe how American policymakers came to believe that nuclear weapons rendered earlier military history irrelevant and that new modes of prevision and new forms of expertise could substitute for experience. They show how the idea of preventive war came to be discredited, and how policymakers were socialized to avoid provoking the other side. These exercises also underscored the need for—and sufficiency of—a deterrent that could survive a surprise attack. Controlling the production of authoritative visions of the future, including predictions that were designed to deceive Moscow, thus helped determine the outcome of the Cold War. The authors conclude that the most implausible ideas about future war may have been the most important of all.

In "Imaginary Futures and Colonial Internationalisms," Manu Goswami takes up the challenge of thinking about historical futures from a comparative and transnational perspective. She does so by revisiting internationalisms forged in colonial worlds during the 1920s and 1930s, an approach that has been eclipsed by the preponderant focus on nationalism and a wider privileging of histories of experience over expectation. The essay argues that interwar internationalist projects underline the improvisational nature of imaginary futures, especially how perceived geopolitical openings enabled gambling on different visions. Colonial internationalisms were thus neither a historical anomaly nor an intrinsic category error. Rather, they helped amplify political modernism as a global formation by offering a future-oriented conception of geopolitics and upholding equality as the central political problem. Goswami's analysis is illustrated through an explication of the anti-imperial internationalist sociology of Benoy Kumar Sarkar. In 1917 Sarkar identified his project as a joint overcoming of "colonialism in politics and . . . 'orientalisme' in social science." He sought to combine a conceptual "critique of Occidental reason" with a demonstration of the political claim that contemporary anti-imperial struggles were the emblem of the future in the present. His views were remarkable, Goswami suggests, for demonstrating the analytical and ethical deficiencies of most social science theories, especially historicist schemas that ignored the "prospective capacities" of marginal classes, races, and regions.

This year's AHR Conversation convenes six scholars to discuss how historians should think about emotions, as both a concept and an experience, in reconstructing the lives of people in past times. The participants, led by the AHR Editor, are Nicole Eustace, a historian of early America; Eugenia Lean, who studies modern Chinese history, literature, and culture; Julie Livingston, an anthropologist who works in Africa; Jan Plamper, a specialist in Soviet and Russian history; William Reddy, who has written widely on modern European as well as comparative history; and Barbara Rosenwein, whose research has ranged across the religious, social, and intellectual history of the Middle Ages. Each has emerged among the leading figures in the new field of the study of emotions. The conversation took up several themes, beginning with the different paths that took the participants to the study of this topic. It also broached the controversial subject of whether and how historians should use the new findings of neuroscience in studying emotions.

February’s AHR will include the AHA presidential address by William Cronon, an article on the Japanese colonization of Korea in the early 20th century, and an AHR Forum, "Transnational Lives in the Twentieth Century."

Robert Schneider (Indiana Univ.) is the editor of the American Historical Review. 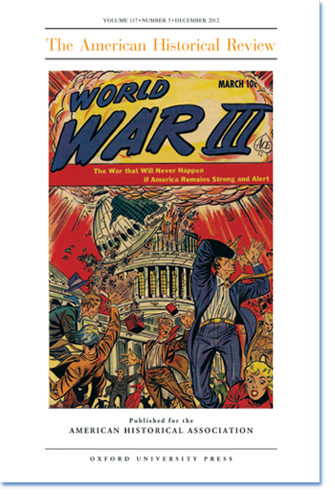 As the competition between the superpowers intensified after World War II, a nuclear World War III loomed as a very real prospect. The unprecedented speed and violence that would characterize this new type of warfare rendered conventional military preparations impracticable. Thus U.S. policymakers were impelled to prepare for the threat from the Soviet Union not on the basis of past experience but by engaging in intelligence estimates, future scenarios, simulations, and technology forecasts. As a result of those assessments, the United States amassed a staggeringly large and expensive nuclear arsenal, all in the name of deterrence. In “‘General, I Have Fought Just as Many Nuclear Wars as You Have’: Forecasts, Future Scenarios, and the Politics of Armageddon,” Matthew Connelly, Matt Fay, Giulia Ferrini, Micki Kaufman, Will Leonard, Harrison Monsky, Ryan Musto, Taunton Paine, Nicholas Standish, and Lydia Walker show how the use of such “prevision” helped to determine the outcome of the Cold War. Their article is part of an AHR Forum on “Histories of the Future.” The four contributions focus on what Reinhart Koselleck termed “the horizon of expectation,” incorporating visions of the future into studies of the past. They offer a range of perspectives on how imagining, planning, and conceiving of future events and developments have played a crucial role in shaping the choices and actions in the present. Ace Comics, World War III 001 (1953).