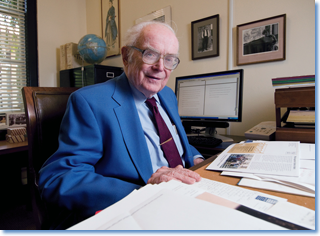 Richard Wall Lyman was born in Philadelphia on October 18, 1923. He entered Swarthmore College in 1940 but was drafted in 1943 and served in the Army Air Forces Weather Service for three years. He returned to Swarthmore in 1946 and was much influenced there by the European historian, Laurence Lafore. He met Elizabeth "Jing" Schauffler, the sister of a classmate, whom he married in 1947. They had four children. Elizabeth characterized herself as a "professional volunteer" and was deeply involved with questions of civil liberties and the position of women in society. She is a person of great personal warmth and provided constant and wonderful support and outreach for him throughout his career. The same year they married, Lyman began his graduate studies in history at Harvard University, receiving his PhD in 1954. His teacher was David Owen. Lyman's contemporaries at Harvard, such as John Clive, Philip Poirier and Stephen Graubard, went on to distinguished careers in modern British history.

In the academic year 1951–1952 Lyman had a Fulbright scholarship in London to work on his dissertation, but also wrote for The Economist. He so impressed its editor that the magazine asked him to head its Washington bureau, but he was committed to being a historian. He taught first at Swarthmore College; then Washington University, St. Louis, from 1953 to 1958; and finally moved to Stanford University in 1958. As a historian of the British Labour Party, he was drawn to Stanford's Hoover Institution, which had the finest research collection on the Labour Party in the United States. He served as associate dean of arts and sciences, then provost in 1967, and president of the university in 1970. While provost and president he dealt firmly and generally successfully with the traumatic events of the period that not infrequently brought intense tumult to the campus. He has written about those years in his Stanford in Turmoil: Campus Unrest, 1966–1972 (2009). He left Stanford in 1980 to become president of the Rockefeller Foundation until 1988, but returned to head Stanford's international studies program. He retired in 1991 but remained an important presence on campus. He died on May 27, 2012, at the age of 88.

Lyman's daughter, the Rev. Holly Lyman Antolini, stated at his memorial service: "Something hopeful caused him, amidst all the turbulent counter-forces of affirmative action, Nixonian politics, and Vietnam War protests, to hold firmly, with fervent moderation and a conviction in the priority of the rational over the emotional, to his clear commitment to protect civic discourse and academic freedom until things began to calm down. Then, on that foundation of trust, he proceeded to lay the financial and programmatic groundwork for the flourishing of the University today." In her talk she also captured his personality, austere on the surface but with wit and deep humanity just below. She also mentioned his deep love for the poetry of Philip Larkin and T. S. Eliot, and his identification with the character of the deeply pessimistic Eeyore in Winnie the Pooh. Though he was agnostic, one can't but think that his style was influenced by Swarthmore, a Quaker college. His liberal beliefs manifested themselves in various ways such as pressing his more conservative colleagues in the history department towards more inclusive hiring and, as an administrator, persuading the trustees to abandon an old policy of excluding non-Protestant religions from having offices and places of worship on campus.

Richard Lyman is best known as president of Stanford University, and for continuing the work of Stanford President Wallace Sterling and Provost Lawrence Terman in making it one of the most prominent universities in the world. But he was also an accomplished historian. During the 10 years he was an active member of the Stanford history department, he was an excellent lecturer and teacher of undergraduate and graduate students. His colleague and former undergraduate student David Kennedy remarked, "He was a really great teacher; he was exceptionally rigorous, but he was also very supportive." Speaking at the memorial service, Kennedy gave a vivid account of Lyman's honors seminar on the writing of history and his preference, in the British tradition, for the empirical over the theoretical.

He was also a publishing scholar, writing numerous book reviews on modern British history in scholarly journals and editing the volume Major Crises in Western Civilization with Lewis Spitz (1965). But his greatest achievement as a historian was his revised dissertation, The First Labour Government, 1924 (1957). It has not been superseded. Many of the earlier historical studies of the Labour Party had been devoted to its formation and its replacement of the Liberal Party as the second party in the nation-state. In 1924, for the first time, the Labour Party briefly came into power, with J. Ramsay MacDonald as prime minister. The book is a superb study that has a richly incisive political sense, a firm grasp of the ideas that shaped the party, and a fine awareness of the personalities involved. With wit and insight, it deals with the eternal problem of how the left copes with British society and government. One sees again how the powers that be are able to co-opt the dissidents. In one delightful episode the cabinet gives in and wears court dress at ceremonial occasions, much to the distress of some members of the party. As Lyman wrote, "Perhaps Court Dress was the beginning of the end, for those who hoped that the Labour Party represented the British Revolution in embryo." The hero of the book may be John Wheatley, the minister for health, whose activities on behalf of housing, the "homes for heroes" promised after the First World War, was a considerable accomplishment for the government. Lyman's analysis was not only accurate with its emphasis on the interplay of principles and what was practical but it also reflected much of the character of the author, a man of principle who, as a powerful administrator, had to deal with practicalities and compromises. In a sense, a university president is a head of state, perhaps even more so at the unincorporated township of Stanford. As a political liberal, being attacked by both the right and the left in a time of turmoil, Lyman was not all that dissimilar from the Labour leaders he wrote about. But apart from that, his monograph stands on its own as an extremely important contribution to the history of 20th-century Britain.

After this publication, Lyman continued to work in modern British history, holding a Guggenheim Fellowship in 1959–60. The fruits of that year were in two important articles in the Journal of British Studies: "James Ramsay MacDonald and the Leadership of the Labour Party 1917–1922" (1962) and "The British Labour Party: The Conflicts between Socialist Ideals and Practical Politics between the Wars" (1965). His insight, his counsel, his knowledge, his experience, his person will be much missed.

A version of this essay appeared in the November 2012 issue of the Pacific Historical Review.