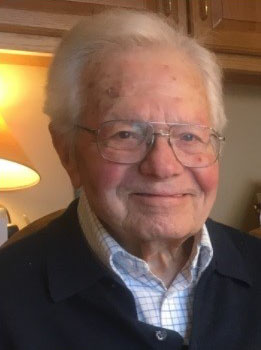 Paul W. Schroeder, professor emeritus of European history at the University of Illinois at Urbana-Champaign, passed away in State College, Pennsylvania, on December 6, 2020.

Born in Cleveland, Ohio, in 1927, he initially followed in his father’s footsteps by attending seminary in St. Louis, where he met his wife of 70 years, Violet Doolin. She survives him, along with their two daughters, Jan and Susan, two brothers, eight grandchildren, and 18 great-grandchildren. He was ordained as a Lutheran pastor, but he left the ministry in 1954. In a sermon many years later, he claimed he was “not unfrocked, just unsuited.” Yet one cannot write a remembrance of Paul without acknowledging his great faith and commitment to the Lutheran Church and his family.

All who knew Paul as colleague, professor, and mentor recognized a powerful intellect, a meticulous and innovative researcher, a highly productive author who transformed his field, and a kind and warmhearted man with an underappreciated sense of humor. His thoroughly documented, rigorously argued, and innovative scholarship fostered both admiration and scholarly debate. Many of his books were recognized for their excellence: The Axis Alliance and Japanese-American Relations, 1941 (Cornell Univ. Press, 1958), which won the AHA’s Albert J. Beveridge Award; Metternich’s Diplomacy at Its Zenith, 1820–1823 (Univ. of Texas Press, 1962), which was awarded the Walter Prescott Webb Memorial Prize; Austria, Great Britain, and the Crimean War: The Destruction of the European Concert (Cornell Univ. Press, 1972); and The Transformation of European Politics, 1763–1848 (Clarendon Press, 1992), which historian Hamish Scott called the “book that keeps on giving” with its “layers of meaning.” This groundbreaking study demonstrated Paul’s unparalleled expertise in the history of international relations and generated numerous conferences and speaking engagements, a forum on the Vienna System in the American Historical Review (1992), and a special edition of the International History Review (1994). Fourteen of his most influential articles and book chapters were collected in Systems, Stability, and Statecraft: Essays on the International History of Modern Europe (Palgrave Macmillan, 2004). Unsurprisingly, given both his scholarship and his dedication to the profession, he served on many councils, associations, and editorial boards, including the AHA’s Research Division and the American Historical Review Board of Editors.

Paul’s awards included a Fulbright (1956–57), a National Endowment for the Humanities Fellowship (1973), and the accolade of which he was most proud, designation as University of Illinois Jubilee Professor of Liberal Arts and Sciences (1992). He was a fellow at the Woodrow Wilson International Center for Scholars (1983–84), a visiting research fellow at Merton College, Oxford (1984), and a visiting scholar at the Mershon Center for International Security at Ohio State University (1998). In 2012, the London Review of Books identified Schroeder as “arguably the greatest living American historian.” Scott described him as “by far the leading historian of international relations of the past generation and a scholar who re-shaped the way in which we all think about and study diplomatic contacts in the past.”

Teaching, as much as research and writing, was a passion of Paul’s. His students benefited from his devotion and remember his lectures as riveting. He pushed them to think in new ways about history and historical interpretation. He was never too busy to read, encourage, and clarify ideas for his students. In the classroom and beyond, Paul sought to convey the relevance of history in making sense of and seeking solutions to contemporary challenges. He deployed his expertise in international relations and reputation to speak out against the American invasion of Iraq in such venues as National Interest (2001–02) and the American Conservative (2002).

An avid tennis player through his 70s, he built his own tennis court. He loved classical music and cooking, taught himself woodworking and construction, and built a three-bedroom house nearly by himself. Paul was a man of many talents, virtues, and interests, and one cannot appreciate his character and stature by considering his academic accomplishments alone. His publications have left a rich and transformative legacy, but not as powerful a legacy as the man himself. His very life was the gift that kept on giving.