Dealing with a Fragile Past

Historians concern themselves with the retrieval of sources and the creation of knowledge. But how do we cope with loss and destruction, either through tragic accident or deliberate efforts to obscure the past? The April issue of the American Historical Review features a pair of contributions to the journal’s new section, “History Unclassified,” that consider the problem of vanished historical data.

In “The Death of Brazil’s National Museum,” Ana Lucia Araujo (Howard Univ.) measures the enormous cultural losses occasioned by the museum’s destruction by fire last September. Charting the place of Rio’s colonial Museu Nacional in the forging of the nation of Brazil, Araujo emphasizes the importance of its ethnographic collections. The loss of artifacts documenting the country’s indigenous and African pasts comes at a fraught moment in Brazilian politics, as the recently elected right-wing government erodes many of the recent gains achieved for these populations. A reckoning of the museum’s loss can also be accessed in the recent “AHR Interview,” conducted with scholars and curators familiar with the collection. In that interview, curator Mariza de Carvalho Soares observes that historians, like archaeologists, have always had to rescue remnants of the past for the present.

If poorly protected artifacts present one challenge to preservation, state control of the internet portends another. In “Peering Down the Memory Hole: Censorship, Digitization, and the Fragility of Our Knowledge Base,” Glenn D. Tiffert (Hoover Inst.) explores how technological and economic forces are radically restructuring our ecosystem of knowledge. Using an illustrative case from China, Tiffert shows the negative effects of digital tampering on scholarship. He demonstrates how Chinese knowledge platforms comparable to JSTOR are stealthily redacting their holdings of Chinese legal journals that registered alternative legal principles in the early years of Maoism. Machine-learning models can now accurately reproduce the choices made by human censors, threatening to impose a new, algorithmic paradigm of information control and censorship that poses an existential threat to the foundations of all empirically grounded disciplines.

The April issue contains four additional articles, many offering methodological innovations. “Early Modern Social Networks: Antecedents, Opportunities, and Challenges,” by Kate Davison (Univ. of Sheffield), historicizes the recent application of social network theory to analyses of early modern history. Davison detects the origins of the study of social networks—embedded in associational life, intellectual exchange across borders, commercial relations, and ties of patronage—in the emergent social thought of the late 19th and early 20th centuries. In doing so, she suggests the extent to which social network analysis shares antecedents, interests, and goals with more traditional historical methods. When sensitively applied, she contends, network analysis presents many opportunities for historians engaging with enduring questions about the nature of social relations in the past.

If Davison shows that a “new” method has older roots than we commonly imagine, Kathryn Olivarius (Stanford Univ.) advances an argument resting on a powerful neologism in “Immunity, Capital, and Power in Antebellum New Orleans”: “immunocapital.” Olivarius reminds us that antebellum New Orleans was a “necropolis”: yellow fever routinely killed about 8 percent of its population. A person’s only apparent protection against the scourge was to survive a bout of yellow fever. Repeated epidemics, Olivarius argues, generated a hierarchy of immunocapital, whereby “acclimated citizens” (survivors) leveraged immunity for social, economic, and political power while “unacclimated strangers” (poor, recent immigrants) languished in social and professional purgatory. Not surprisingly, immunocapital had racially differentiated meanings. For whites, acclimation indicated that a person had paid their biological dues and could pursue economic advancement in a slavery-based racial capitalist system. For enslaved black people, immunity enhanced their value as capital for investment by their white owners. By fusing medical history with the study of slavery and capitalism, Olivarius presents an exciting new model for how power operated in a 19th-century Atlantic society wracked with disease.

A different kind of environmental history animates “The Walrus and the Bureaucrat: Energy, Ecology, and Making the State in the Russian and American Arctic, 1870–1950,” by Bathsheba Demuth (Brown Univ.). Through a comparative analysis of US and Soviet exploitation of the Pacific walrus, Demuth demonstrates that the shared ecological context of the Bering Strait influenced both nations’ roles in reshaping the Arctic environment. Demuth shows how Cold War competition to increase Arctic economic viability, while making capitalist or socialist citizens of indigenous peoples, encouraged walrus hunting in the Bering Strait. Both countries experimented with massive harvests of blubber and ivory to stimulate the Arctic economy before eventually adopting mirrored conservation policies. Demuth identifies the inherently metabolic nature of modern states—which function by assuring flows of energy through their economies—as the common source of these practices. In the Bering Strait, that energy came in part from walruses, making it imperative for the two countries to manage the species’ biological capacities.

Finally, in “Catholics, Protestants, and the Violent Birth of European Religious Pluralism,” Udi Greenberg (Dartmouth Coll.) explores one of post–World War II Europe’s most dramatic, if overlooked, ideological transformations: rapprochement between Protestants and Catholics. Greenberg’s article charts ways in which political upheavals between the 1930s and 1960s led to new conceptions of religious pluralism, tolerance, and freedom. Greenberg contends that such developments called for equality between Christian denominations while simultaneously excluding religious minorities, especially Jews and Muslims. During the 1930s, Nazism’s promise to unite the two denominations in a racial community instigated the first systematic inter-confessional cooperation. In the postwar era, the unfolding of decolonization in Africa and Asia further expanded this ecumenicalism. The postwar decline of state-sponsored missionary work, alongside anxieties about the spread of Islam among newly liberated nations, pushed Christian leaders to solidify an inter-Christian alliance. In both instances, the anti-Marxism of leading Christian thinkers and politicians eased the way. Greenberg concludes that this history helps explain why contemporary Europe easily accommodates both Catholics and Protestants but often discriminates against non-Christians.

The April issue also includes another contribution to our ongoing series “Reappraisals.” In “Worlds without End,” Camilla Townsend (Rutgers Univ.) assesses the contribution made by Charles Gibson in his pathbreaking work of 1964, The Aztecs under Spanish Rule: A History of the Indians of the Valley of Mexico, 1519–1810. Townsend regards Gibson as ahead of his time, prepared by his own life experience to recognize not only the victimization of Native peoples but also their agency and strength. Untrained in any indigenous language, Gibson proved unable to rely on indigenous-authored sources, whose importance he nevertheless underscored. His emphasis on indigenous subjectivity was taken up by the next generation of scholars of colonial Mexico, who, with language training, further disseminated Gibson’s focus on indigenous perspectives. 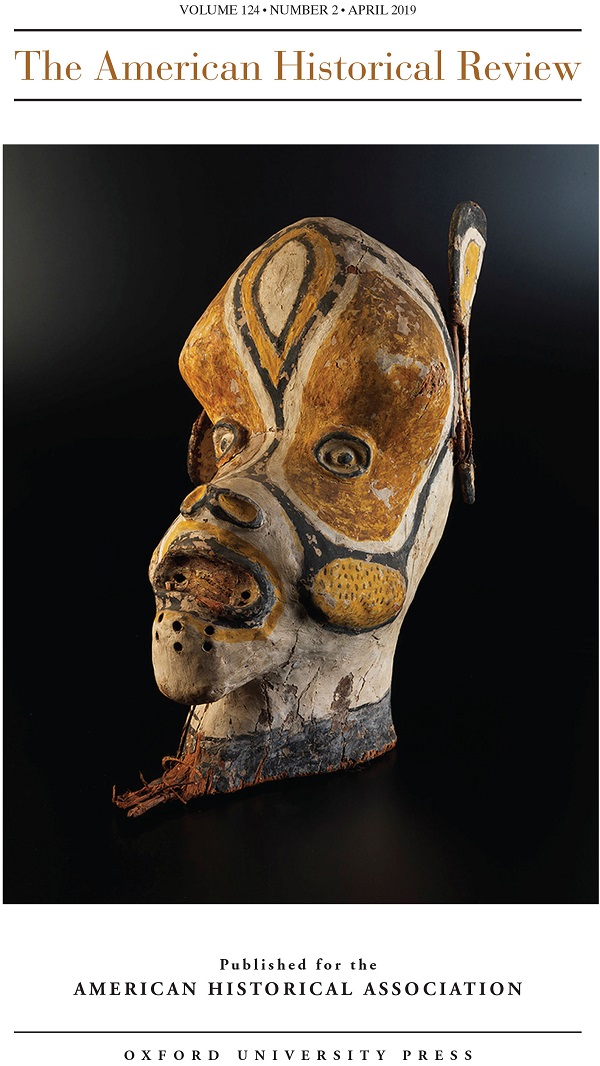 For more than 125 years, Brazil’s National Museum (Museu Nacional) was located in the historic São Cristóvão Palace in Rio de Janeiro. When the deteriorating structure caught fire in September 2018, the massive blaze consumed millions of objects that had been amassed over two centuries, including priceless archaeological, anthropological, geological, and paleontological artifacts, as well as hundreds of thousands of books and documents and irreplaceable audio recordings of extinct indigenous languages. In “The Death of Brazil’s National Museum,” Ana Lucia Araujo shares the history of the Museu Nacional and laments what was lost to the flames. The Tikuna mask pictured on the cover of this issue was part of the museum’s huge collection of indigenous artifacts. It appeared in one of the illustrations in Jean-Baptiste Debret’s Voyage pittoresque et historique au Brésil (1834–1839), based on a drawing the French painter made of the mask during his residence in Brazil from 1816 to 1831.