Every now and then, the content of an issue of the AHR will align with events shaping the daily news. The timeline of submission, review, and print is such that our publication rhythm rarely coincides with the 24-hour news cycle. The April issue is a rare and welcome exception.

The first thing readers will notice is that the issue contains two lengthy review essays, a genre that we encourage but that many scholars prove reluctant to take on. The first, “The Geopolitics of Mobility: Immigration Policy and American Global Power in the Long Twentieth Century,” by Paul A. Kramer (Vanderbilt Univ.), charts an emerging historical scholarship that asks how US foreign relations have shaped US immigration policy. Considering overlaps in immigration historiography and closely related new work on American imperial foreign policy and affairs, Kramer shows how US immigration policy has long engaged self-consciously with transnational realities, from 1898 to the present day, on multiple levels.

If the question of immigration restriction currently dominates what we mistakenly take to be domestic news, discussions of international relations have recently concentrated on the intentions of the so-called hermit kingdom of the Democratic People’s Republic of Korea, a.k.a. North Korea. Much like Kramer, Andre Schmid (Univ. of Toronto) organizes our second review essay around the concept of mobility, though in a very different fashion. In “Historicizing North Korea: State Socialism, Population Mobility, and Cold War Historiography,” Schmid shows how Korean history and historiography remain deeply shaped by the legacies of transnational anti-­communism even as historians studying socialism in other settings have shed many of their Cold War assumptions about state power. Schmid instead puts the historiography of North Korea in a comparative perspective with other socialist countries such as the Soviet Union, China, and East Germany, highlighting the limited ability of state socialist regimes to control population movement. His essay helps disrupt the cartoonish depiction of the North Korean state that can seep into the historiography, inviting a subtler analytical framework for understanding the nature of dictatorship in the country. Surely a circle much wider than professional historians could benefit from these insights at a moment of global peril.

This pair of timely review essays is followed by two articles that consider the nature of empire in extremely different contexts. “Staging an Empire: An Ottoman Circumcision Ceremony as Cultural Performance,” by Kaya Şahin (Indiana Univ.), takes us inside a 20-day royal Ottoman circumcision ceremony in the year 1530, replete with mock battles, processions, and feasts. Şahin’s description of this elaborate ritual illustrates how members of the Ottoman political-military elite performed their identities and asserted their place in the Ottoman social order. Much the way Macabe Keliher did in his October 2017 article on ceremonies in the Qing dynasty, Şahin shows how early modern empires used public ceremonies and rituals as instruments of governance by creating highly visible, memorable, and relatively participatory events that functioned as new spaces for political and cultural interactions.

Matthew Hilton (Queen Mary Univ. of London) takes up an unanticipated result of the dissolution of empires in the latter half of the 20th century. In “Charity and the End of Empire: British Non-Governmental Organizations, Africa, and International Development in the 1960s,” Hilton contends that in the wake of British decolonization, humanitarian charities were recast into modern NGOs. While focused on small-scale grassroots initiatives, these organizations remained tied to long-term official development planning. In this guise, humanitarian and aid initiatives proved useful to the late colonial state, to immediate postcolonial rulers, and to the growth of a liberal internationalism—not to say neocolonialism—as a constituent element of a new global developmental regime.

The April issue also continues our efforts to introduce new features to AHR readers. It includes the second installment in our ongoing “Reappraisals” series. This feature invites scholars to reconsider in depth an influential historical work, and to measure its impact on a wide swath of historiography after a decent interval has passed. This time, Max Berg­holz (Concordia Univ.), a historian of murderous Balkan nationalism, revisits Benedict Anderson’s influential meditation on the nature of nationalism, Imagined Communities: Reflections on the Origin and Spread of Nationalism (1983). Bergholz’s essay has the considerable virtue (and advantage) of reading Imagined Communities in conjunction with Anderson’s fascinating 2016 memoir, A Life Beyond Boundaries, finished right before his death. Bergholz reconsiders the lasting strengths—as well as weaknesses—of Anderson’s widely read work. He concludes that the continuing relevance of Imagined Communities derives not so much from its specific historical explanation for the birth and diffusion of nationalism, but rather from the book’s shift away from ideology, elites, and socioeconomic change, and toward cognitive processes and vernacular forms of nationalist consciousness. This reappraisal essay is accompanied by a podcast discussion between Bergholz and me as the latest entry in our ongoing “AHR Interview” series.

In an exciting new feature, the AHR has decided to return to the long-discontinued practice of supplementing reviews of scholarly monographs with reviews of films of potential interest to historians. Unlike books, films do not arrive at our office in a steady stream; the editorial team must independently identify visual material for review and then commission reviewers. For now, this means that instead of constituting a regular feature, film reviews will appear occasionally in a special, curated section, bundled around a particular theme. The April issue highlights four important recent films about Africa, three of them African productions. Eric Allina (Univ. of Ottawa) reviews a Mozambican feature film about that country’s civil war, The Train of Salt and Sugar (2016). Sean Jacobs (New School) offers his take on the 2016 South African feature film Noem My Skollie (Call Me Thief), situating it in the long traditions of South African gangster cinema, memoir, journalism, and fiction. Heike Becker (Univ. of the Western Cape) considers Vincent Moloi’s documentary about German colonial looting of Namibian human remains, Skulls of My People (2016), and the demand for repatriation of this heritage. And Ibrahim Sundiata (Brandeis Univ.) examines Gregg Mitman’s recent documentary about ongoing historical struggles over land in Liberia, The Land Beneath Our Feet (2016).

In future issues we plan to run similar review features focused on museums, documentary collections, graphic histories (think Maus), and historical fiction. Scholars with suggestions for reviews of this kind of material—and beyond—should contact me directly at ahredit@indiana.edu. And yes, in case you were wondering, we are planning to do something on Black Panther. 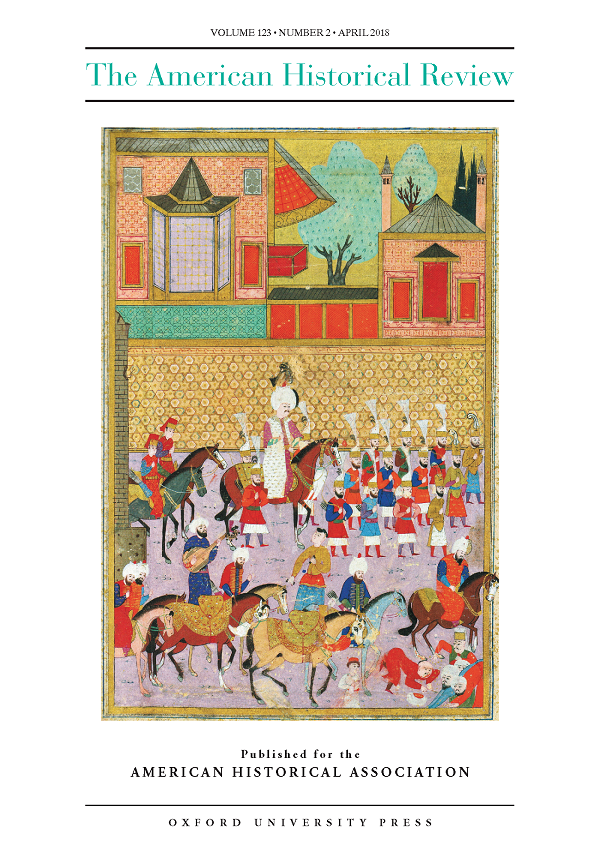 Sultan Süleymān arriving at the Hippodrome of Constantinople on the occasion of a circumcision ceremony held for his sons Muṣṭafā, Meḥmed, and Selīm. From Hünernāme (completed in 1587–88), vol. 2, H. 1524, Topkapı Palace Museum Library, Istanbul, 104a. During a 20-day celebration in the summer of 1530, the Hippodrome was turned into a stage for gift exchanges, mock battles, parades, skills demonstrations, public feasts, and nightly fireworks. These activities allowed individuals and groups within the Ottoman political-military elite, and within the city of Constantinople, to perform their identities and assert their places in the Ottoman social order. In “Staging an Empire: An Ottoman Circumcision Ceremony as Cultural Performance,” Kaya Şahin argues that the celebration stemmed from a new Ottoman court ceremonial that was developed after the mid-15th century, particularly under Süleymān.

The proceedings reflected the multiple origins of Ottoman ceremonial culture, which borrowed themes and motifs from the Byzantines, the Venetians, and myriad Turko-Muslim polities. The event highlighted the elevation of male circumcision, a fundamental ritual in all Islamic societies, to an occasion for the promotion of the Ottoman dynasty. Additionally, by creating highly visible, memorable, and relatively participatory settings, and by constituting new spaces for political and cultural interactions, the ceremony served as an instrument of governance. The ceremony’s message resonated among subsequent generations as well. A circumcision celebration in 1582 openly referenced 1530. Around 1587–88, five double-page miniatures (including the single-page depiction reproduced here) offered the first pictorial representations of the event as part of Hünernāme, an illustrated two-volume work whose second volume commemorated the legacy of Süleymān.