As Donald Trump and Xi Jinping prepared for what Trump has warned will be a “very difficult” meeting at his Florida resort, several leading historians of modern China gave a richly informative briefing on March 27 at the Capitol about the underlying issues that shape the Chinese government’s engagement with the United States and the world. Sponsored by the National History Center, the purpose of the briefing was to give historical context to current tensions between the United States and China, with a particular focus on Chinese aims and anxieties. 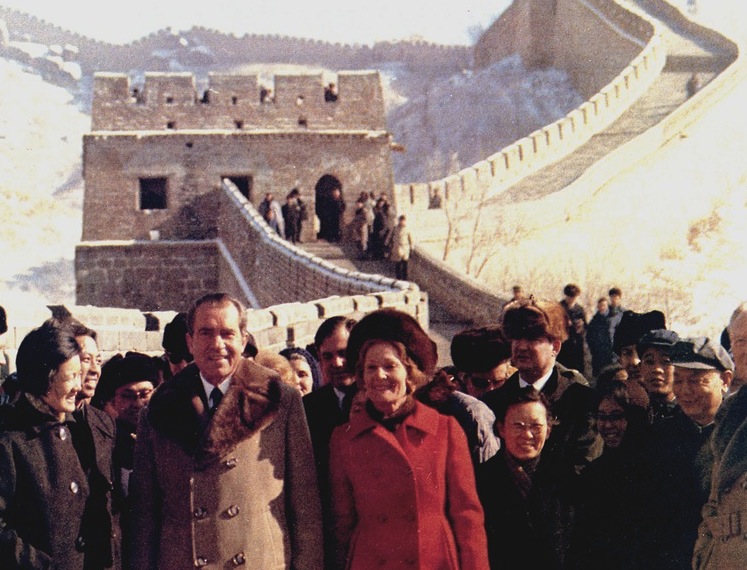 In 1972, Richard Nixon became the first US president to visit China. In another round of US-China diplomacy, this week, Chinese Premier Xi Jinping is anticipated to visit US President Donald J. Trump at the Mar-a-Lago resort in Florida. Wikimedia Commons

Jeffrey Wasserstrom, professor of Chinese history at the University of California, Irvine, and editor of the Journal of Asian Studies, opened the session with comments on the need to frame Xi Jinping’s regime in several historical contexts. First, he noted that the Communist Party’s enduring grip on power gives it considerable confidence, even as it remains skittish about the potential for an eastern European-style “color” revolution or an Arab Spring-like popular uprising. He also observed that Xi has sought to cast himself both as a nationalist strongman in the image of Mao (and, curiously enough, Chiang Kai-shek) and as a global leader whose cosmopolitanism is signaled by his tailored Western-style suits.

Given the growing economic disparities and corruption in contemporary China, the current regime has shifted the historical narrative that justifies its rule from the creation of an egalitarian society to the restoration of China as a great power. The 1949 founding of the People’s Republic of China is presented as the key turning point: a weak, exploited nation was transformed into today’s strong, assertive state. Expansion into the South China Sea is a way to whip up nationalist sentiments. At the same time, the regime promotes an image of China that evokes its traditional cultural values, especially Confucianism and Buddhism, and stresses its modernity and prosperity. Communist Party leaders believe that the government’s survival depends on diverting popular demands for democracy by delivering economic prosperity to its populace. It’s a risky strategy, Wasserstrom observed, and one that requires a careful balance of coercion and conciliation.

Kenneth Pomeranz, professor of Chinese history at the University of Chicago and former AHA president, weighed in next by highlighting the key concerns and constraints that shape Chinese policies. The ruling regime’s top priority is internal stability. It fears social upheaval at home and political instability on its borders. Yet its ability to address these issues is constrained by its limited influence over local officials, who tend to be poorly paid and corrupt. China is a lot more decentralized that it appears to American observers, who imagine a monolithic, all-powerful state.

China also suffers from serious resource shortages, especially of water and petroleum. Without compliance at the grassroots level needed to minimize waste, the state relies on high-risk, centrally managed dams and other mega-projects to expand supply. Its foreign policy is also driven in large part by its growing demand for resources, which has led to increasing investment in Africa and elsewhere around the world. Pomeranz pointed out that China leases 20 percent of the farmland in Ukraine. Although initiatives of these sorts are evidence of the remarkable size and power of the Chinese economy, China’s per capita GDP is only half that of Kazakhstan’s. In short, most Chinese remain poor and potentially restive.

The moderator of the briefing, James Millward, a Georgetown University historian of China and Central Asia, asked the speakers to respond to the idea put forth by some Chinese commentators that their country has traditionally shunned territorial expansion, providing a peaceful model of international relations that other countries should emulate. Pomeranz dismissed such claims, pointing out that the Qing dynasty doubled the size of China through conquest and spent 50 percent of its budget on military affairs (though Europeans at the time spent even more on warfare). Wasserstrom added that there is no singular Chinese tradition regarding neighboring states and peoples. And Millward himself noted that the early 15th-century voyages of Zheng He have been used to legitimize the current regime’s expansionist actions in the South China Sea.

The panelists commented on other issues that are likely to influence the impending summit. They suggested that several recent developments favor China. It prefers bilateral trade negotiations of the sort Trump has advocated. It sees a weakened European Union, beset by Brexit and other nationalist challenges, as advantageous to its economic interests. And it is the main beneficiary of the US abandonment of the Trans-Pacific Partnership trade agreement.

On the geopolitical front, Pomeranz pointed out that China is reluctant to rein in North Korea because of the instability this might cause, with ripple effects likely to be felt back home. Its military expansion in the South China Sea should be taken seriously, but it also needs to be understood in the context of the Chinese navy’s desire to show off its new “toys.” Wasserstrom added that the deterioration of American relations with the Philippines makes it more difficult for the United States to restrain this expansion.

The panelists provided a primer on the complex array of issues that confront modern China, inform its domestic and foreign policies, and shape its relations with the United States. The success of the upcoming summit requires deep knowledge and sensitivity on the part of the American delegation. Alas, these qualities are in short supply in the current administration. If anything is likely to attract Trump’s appreciation when he meets with Xi, it is likely to be China’s Great Wall.