Baguettes and Roses: An Interview with Alice Waters, Food Revolutionary

The National Endowment for the Humanities celebrated its 50th anniversary last September with a conference in Charlottesville, Virginia: Human/Ties. Asking what it means to be human, the events ranged over several themes, including democracy, race, and warfare. Under sunny skies and starry nights, the events (all free and open to the public) allowed luminaries from the humanities, all supported in some way by the NEH, to exchange ideas with new and old supporters of the humanities. 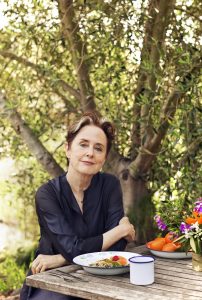 One of the conference’s signature events, held at downtown Charlottesville’s Paramount Theater, was “Farming the Earth, Cultivating Humanity.” Imagine filing into a gilt auditorium with the aroma of garlic sautéing in butter in the air, thanks to an aproned gentleman onstage equipped with a hotplate, a skillet, and a wooden spoon. Recordings of “This Land Is Your Land,” sung by the likes of Bruce Springsteen and Woody Guthrie, run softly on a loop. And behind the cook onstage, a slideshow of pithy quotations about food: “How can a nation be called great if its bread tastes like Kleenex?” (Julia Child). “How can you govern a country which has 246 varieties of cheeses?” (Charles de Gaulle). The stage was set with comfy-looking chairs fortunately not completely overwhelmed by the kale, onions, and other vegetables that dominated the scene.

Upon closer inspection, the aproned gentleman turned out to be William (Bro) Adams, chairman of the NEH. The unlikelihood of the scene was intensified once the food-world leaders—Alice Waters, Joel Salatin, and the Kitchen Sisters (Davia Nelson and Nikki Silva)—took their seats. Soon after the event started, from nowhere Salatin, a libertarian Christian organic farmer, punctuated whatever he was saying by pulling a black chicken from a pet crate. But it was Waters who stole the show, in her trademark understated way.

Her story is well known: as a student at Berkeley in the 1960s she traveled to France to study French civilization. The aspect of her life there that made the biggest impression on her—and on the rest of us—was the food. “When I got there, I felt I hadn’t really eaten before,” she told the Human/Ties audience. “I had a baguette and apricot jam at a bakery. The next day I went back and had another baguette and jam. I went again and again.” After settling back in Berkeley, Waters founded the restaurant Chez Panisse, still a Bay Area landmark, to bring the best of her gastronomic experiences to a tight community of friends. The restaurant became popular not only for its food but also for its philosophy that using local, noncommercial ingredients was better for the land and for the soul. It has taken decades, but the restaurant’s influence is such that there’s a joke: “Chez Panisse is like every other restaurant because Chez Panisse.”

Now Waters is bringing her “delicious revolution” to education. As a Montessori teacher in younger years, she learned how to bring hands-on learning to children. In several Edible Schoolyards in cities around the country, students learn age-appropriate lessons in science, math, geography, and even history by growing their own food, learning about where it comes from, and cooking it to eat with one another and their teachers. The programs also bring in parents and community members. Waters is also an advocate of the Slow Food movement, which seeks to rid modern culture of fast food—not just what you get from McDonald’s, but a set of beliefs that promote convenience at the expense of deep knowledge and respect for the earth and what it gives us. The Slow Food movement also seeks to promote such communal institutions as family meals.

Though she has been roundly criticized for her vision’s impracticality, inherent exclusivity, and ambivalent gender politics (just who is meant to cook all the things?), Waters is a dynamo whose charisma is difficult to encapsulate. And Edible Schoolyards actually work, by all accounts.

After “Farming the Earth, Cultivating Humanity,” Waters talked with Perspectives editor Allison Miller about food, history, taste, and possibilities for the future.

This interview has been edited for clarity and condensed.

Allison Miller: It seems that you are a historian of sorts. You are interested in the past and have an interpretation of it. Is that accurate?
Alice Waters: I think it is true. I think that I look to the past and am inspired by it, and act accordingly.

AM: Do you think that food has a history that we can access in everyday life? When you bite into an apple, what does that reflect?
AW: Well, it tastes really good! It comes from many years of somebody learning about the biodiversity of apples and knowing when to pick it and what time of year it’s grown. 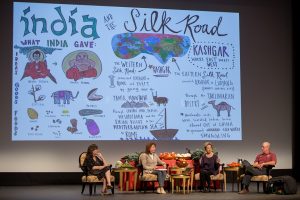 Alice Waters explains Edible Education at Human/Ties, a conference celebrating the 50th anniversary of the National Endowment for the Humanities. Photo by Zach Robbins

AM: Our readers are teachers as well as researchers. Can you talk about your mission as an educator?
AW: I’m really trying to absolutely focus on a transformation of the public school system. But it will only work if we lift up the two people who really feed us: the teachers and the farmers. The project of Edible Education is meant to bring them happily to the table at lunchtime. We want school lunch to become an academic subject. For example, it could be a class about language—let’s say Spanish. So, you might have a placemat that relates to Hispanic culture, and what we’re serving is a tortilla soup. And maybe all Spanish words for the ingredients are written on the placemat, so that you are sort of digesting this subject at the table. I think it would be a way to get “academic minutes” and also focus on food.

Right now kids go into a cafeteria. They just grab what they want and eat in 20 minutes—maybe 20 minutes—so they can get back to their academics. I’m suggesting that that time slot be turned into an interactive academic subject. You would have an hour to really digest what you were eating. And the kids are eating something that is healthful and delicious and from a local organic farm. And it’s something that pleases them.

It also could be any subject. It could be nutrition. It could be social justice. It could be history. A lesson could be on the Silk Road and how people transported food in the past, and what else came along that is still grown. It could be geography. It’s endless. I really feel like it may be a way to get the cafeteria from an afterthought into a place of curriculum.

AM: Why do you see schools as central to changing the way we think about food and society?
AW: The idea of edible education came to me after my daughter, Fannie, was born. She’s 33 now. I really felt like our public schools are our last truly democratic institution and we need to reach every child in this country in a very deep way right now. The responsibility for feeding our children has fallen increasingly on the schools, but we’ve been feeding them food that is not good for them. We can’t change it to be “a little bit better.” We have to change it completely.

AM: Do you see yourself as anti-capitalist revolutionary? Our industrial food system is certainly efficient at feeding masses of people.
AW: I call this a delicious revolution because this isn’t difficult to do, and it’s certainly not violent in any way. This is about tasting something that’s delicious and then going back and buying again from that farmer and giving that farmer your money. Our senses are the pathways into our mind and when they are closed down by poverty or fast food culture, it limits what we can think and see and feel and touch and taste. So this is liberating, and I think that when you learn to taste, it just opens up those senses and a whole world.

There is something happening with food all over this country right now, and some of it is really deep rooted and connected to local agriculture, which is great: the idea of the small restaurant that’s opening up, not to ever get bigger and bigger and bigger, but just wanting to be small and wanting to be a family restaurant. It’s the most hopeful thing going on right now for me, to see that happening really across the country.

AM: What about working parents and those working 40 hours a week or more and commuting? Can they partake in this revolution?
AW: I think it’s unacceptable to commute for long hours and for that not to be considered as part of one’s work. I have a friend who was asked to go one and a half hours up in the country to begin his job, and it’s just never taken into consideration. I think there are so many ways we can humanize the workplace, but the first is around food. And we need to find a place in the buildings where we work and really make an effort to cook together—to have real food. The idea that we are at the mercy of vending machines is something unconscionable. It’s again kind of a fast food value—the more chickens that you slaughter in an hour the better. The more patients you see the better. But the goal cannot be making money. It just leads down to a path that’s really a dead end.

AM: When you think about slow food and fast food, is there a hard and fast dichotomy between them? Or can there be a spectrum?
AW: I’m primarily concerned about the care of the land, which is why organics are important. It’s fast food if it’s not organic. I know a lot of people who are in organics who are trying to make their products more desirable by packaging them. So I would buy packaged spinach if it said “organic.”