Tweeps Discover the Past

On the 50th anniversary of JFK’s assassination last November, several news and media org­­anizations (including NPR, CBS News, and History) commemorated the event by tweeting the tragedy as if it were unfolding in real time. Tweeting past events as if they were live, referred to as “historical tweeting,” is a growing trend, one that combines historical sources and old news alerts with the immediacy of Twitter to recreate the past without reenactors and props. In the case of the JFK assassination anniversary, news outlets eerily began live-tweeting the day’s events with Kennedy’s landing in Dallas, and somberly concluded with Walter Cronkite’s announcement of the president’s death at 2:35 p.m. 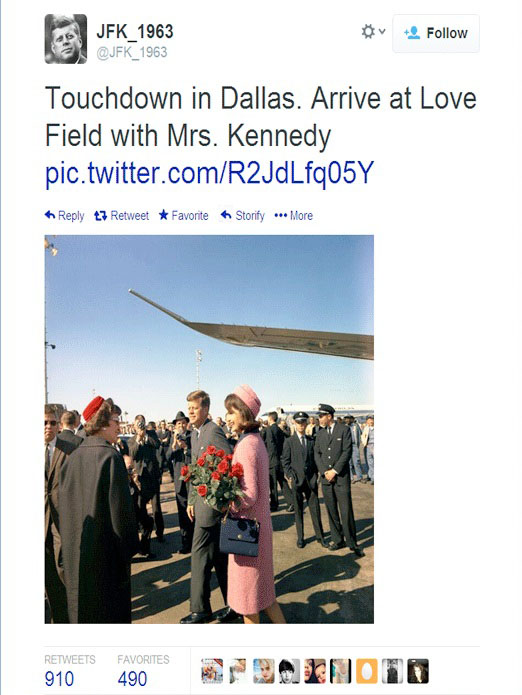 While historical tweeting gains a ­temporary audience, Twitter accounts that distribute historical pictures, called “history pics accounts,” are amassing staggering numbers of followers. History pics accounts tweet photographs from the past, often with one-line descriptions authored by the account holder (there are 14 such Twitter accounts, by Slate columnist Rebecca Onion’s count). The accounts share very similar content; they often tweet pictures of JFK, concentration camp survivors, Marilyn Monroe, Steve Jobs, and, of course, Abraham Lincoln. According to Alexis Madrigal, a writer for the Atlantic who took a close look at the people and metrics behind these accounts, ­
@HistoryInPics (which boasts an impressive 1.13 million followers) averages 1,600 retweets and 1,800 favorites for every tweet. For comparison, he points out that Vanity Fair’s Twitter account, with 1.3 million followers, averages only a dozen or so retweets and favorites per tweet. The immediate success and massive following of history-pic accounts have created a significant online media genre amassing more than 5 million followers across more than 14 accounts (although this does not account for unique followers). Historical tweeters have found success as well, although not on the same level as their pic-sharing counterparts. An NPR historical tweeter, @todayin1963, which was one of the primary JFK anniversary live-tweeters, now reaches more than 30,000 unique users a day.

Their content model has proven to be a phenomenon in the world of Twitter, offering the periodic intrusion of history-focused content into millions of Twitter users’ timelines. Indeed, the success of these Twitter trends demonstrates that the public has an interest in history and has welcomed it into their personal social media streams.

But there is a controversy brewing in the webisphere. Several historians, journalists, and digital humanists have expressed their distaste for these accounts, and their criticisms reveal a divide over how best to share historical events and artifacts, and even who has the right to be the sharer.

History-pic accounts have received the brunt of these criticisms in the last few months, including articles in Slate and the Atlantic. According to the critics, many of the photographs shared on these accounts are not properly sourced or paid for. Best ­practices for sharing and posting images (according to the American Society of Media Photographers) recommend the sharer to follow the creator’s terms of service and copyright law. And beyond these issues, some of the most popular images shared have been misidentified or doctored (including a picture of a swimming instructor misidentified as Nikola Tesla and a doctored image of JFK and Marilyn Monroe in romantic embrace). Madrigal, senior editor at the Atlantic, revealed the tweeters behind @History­InPics as two teenage social media gurus, who, by their own admission, ignored attribution and were working toward a strategy to monetize their Twitter feed (via advertisements). In the words of Madrigal, “They are cheating at the media game, and that’s why they’re winning. (Which they are.)”

While issues of attribution and ­credibility are serious, the use and proliferation of historic photos have led scholars to question the implications of historic artifacts punctuating millions of Twitter feeds without vital information and context about the image attached. Many history-pic tweeters don’t provide the original captions that accompany the images; in many cases, they offer their own captions, which could be misconstrued as the originals. Valuable evidence that informs the study of these objects—provenance, creator, and date of origin—is ignored.

Nor has historical tweeting escaped censure. According to a Mediaite poll, more than 63 percent of respondents found live-tweeting the JFK assassination more crass (their term) than insightful. Graduate student Mortiz Hoffman, one of five historians who runs @9Nov38, a feed that tweets the horrors of Kristallnacht, recalled, in a piece for the New York Times, moments throughout the project when readers misconstrued the historical tweets as happening in real time. Because there is not a standard format for historic tweeters to use when quoting from primary sources, many leave out quotations, attribution, and even hashtags that could be helpful in indicating the sources and dates the tweets reference. 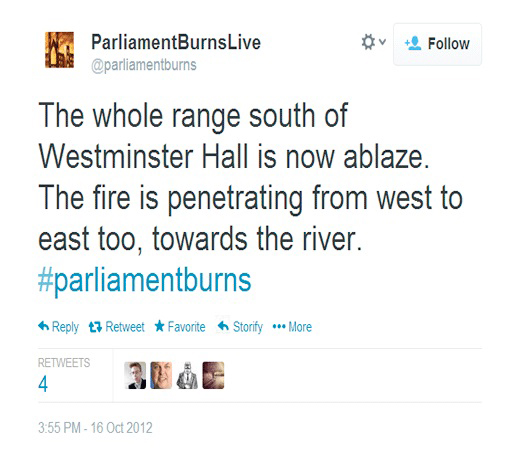 Historians often lament the misuse of history, but the proliferation of historically focused tweets makes the audience an active participant in the misuse every time they retweet or share the content. Sarah Werner, digital strategist for the Folger Shakespeare Library, went so far as to publicly plead with readers on her personal blog to avoid sharing history-pic content, stating “The next time you come across one of these pictures, ask yourself what it shows and what it doesn’t, and what message you’re conveying by spreading it.” Werner’s post went viral online and drew a considerable amount of attention (and praise) from digital humanists and journalists.

There are, of course, Twitter feeds that do offer accurate and reliable attributions, including @SlateVault, @AhistoricalPics, and our own Flashback Friday series on AHA Today. The key, as I have found as I curate our own series, is to go directly to digital archive sources and find the metadata yourself. It may take more work, but more often than not, historians enjoy a little archival expedition. And, as Jason Steinhauer wrote in a series of guest posts for the National Council on Public History’s History@Work blog, there is a trade-off that is difficult to ignore: accounts like @HistoryinPics reveal that there is user demand for history-related content. It falls to other outlets to be role models and demonstrate that accurate and responsible use of ­historical material isn’t incompatible with large audiences.