Teaching with a Tea Set: Using Objects in the US History Survey

One of the central challenges of the US history survey, which many professors will recognize, is that we ask students to absorb and understand massive political and societal changes over an extended period of time, yet few arrive with practice in recognizing the consequences of those changes. Conveying the process of change over time can prove equally challenging for students and professors, as societal transitions have often been subtle rather than overt, and are difficult to discern in the primary and secondary source documents that anchor any history course. My approach to this challenge took me back to the living history museums where my own career as a historian began.

Some years ago, my grandmother handed me her grandmother’s glove stretcher, a tool used to individually stretch glove fingers stiffened by washing, and asked if I ever used one during my museum work. Looking at the glove stretcher in her 21st-century living room, I wondered how students would respond to an object that provided them with so few clues about its purpose and owners. Would they be cautious? Or would they feel free to interpret its use because they did not know what it was? And once they knew its purpose, would I be able to link this exercise back to the rest of the curriculum? Since then, teaching students to consider objects has become a part of my classes, and I cannot imagine teaching without my bobbins and tea sets, deck prisms and glove stretchers. 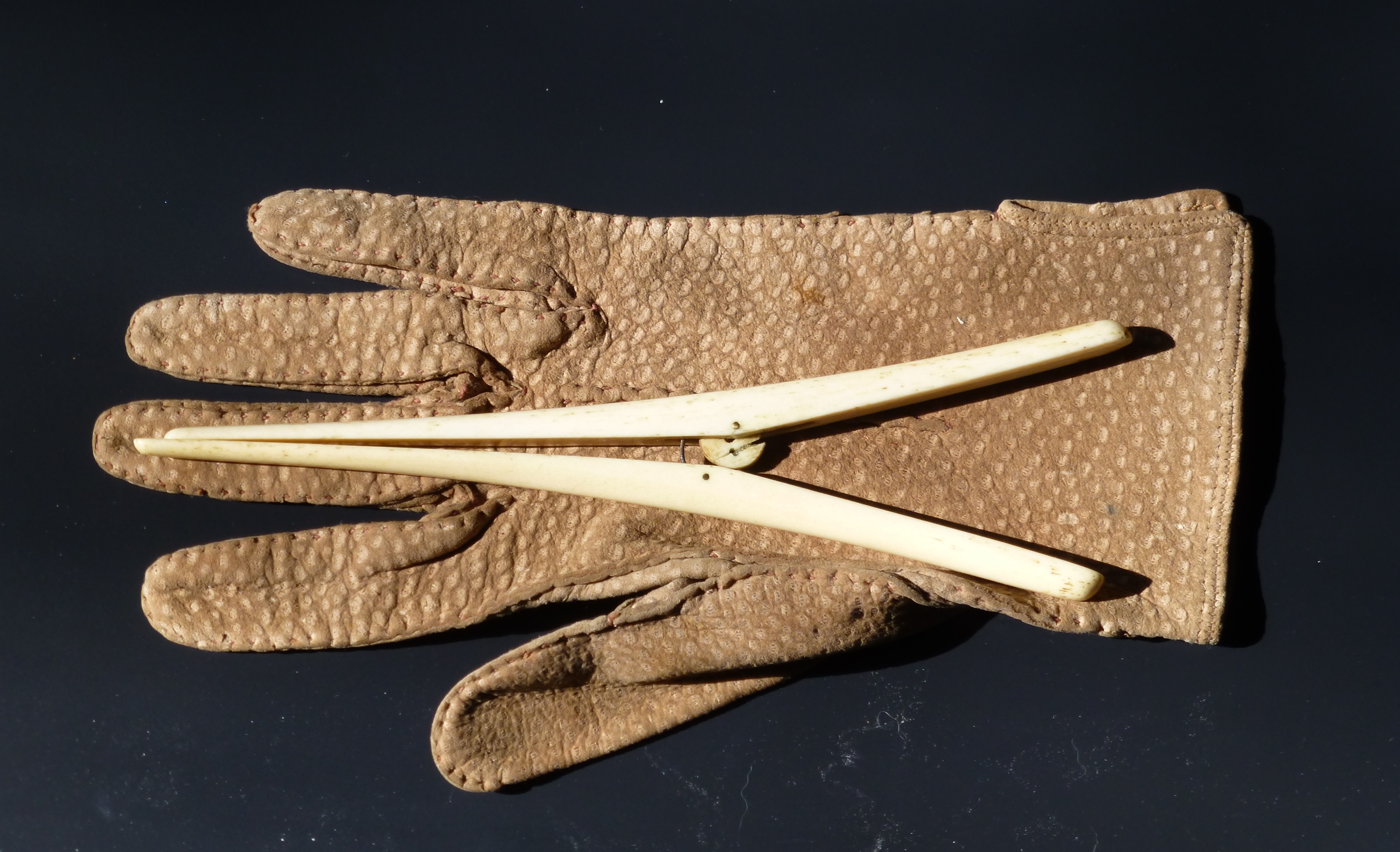 Deciding when and how to introduce historical objects to the classroom requires careful consideration. Sometimes I see an object in a museum or an antiques store and look for a way to add it to a class simply because I like the object itself. Other times I will notice students struggling to understand a particular point, and I will look for an object that will help illuminate that concept. In all cases, I want my historical objects to illustrate an idea better than can be done in words and to help train students to draw connections between historical events and their immediate social and cultural contexts. However, the objects also must be carefully embedded in the class, as objects without context serve little purpose other than catching students’ attention (though I do sometimes use a flint and steel on the first day of class for that purpose).

For me, the obvious solution to these challenges was the wide array of artifacts reproduced for the living history/reenactment communities that I knew from my museum work. As they are not antiques, reproductions can be passed around a classroom without worry that students might damage them, and because they come from museum suppliers, I can be reasonably comfortable that they are accurate. Using reproductions also allows me to make an additional point. We think of objects from the preindustrial period as antiques and expect the ones we see in museums to be hundreds of years old, but all of these items were new when they were originally used.

I find historical objects particularly helpful when discussing broader transitions in labor, consumer goods, and trade networks. I pass a sugarloaf wrapped in blue paper around the room just before talking about taxation in the colonies in the 1760s. As the students feel the hard sugar beneath the paper, I ask them why 18th-century merchants chose to ship and sell their sugar in hard cones, rather than the loose sugar we buy now. Students eventually conclude that sugar was so valuable that merchants did not want to risk losing spilled sugar if a barrel broke open, and this can lead directly into a discussion of why sugar was one of the first products to be taxed by the British Parliament after the French and Indian War.

My lecture on the French and Indian War and Seven Years War finishes by examining the impact that emerging global trade networks had on middle- and upper-class households in the American colonies. To help illustrate these changes, I use the a tea set made for “Felicity,” an 18th-century American Girl doll that has a tea cup without a handle and its saucer, a wooden tea chest, and a silver spoon. Many of the American Girl historical dolls are sanitized, contemporary-influenced versions of the past, particularly as they relate to race and gender—my husband, for example, refers to the Felicity doll as the “upwardly mobile shopkeeper’s daughter.” Nevertheless, the accessories made for the dolls are intended to be accurate reproductions of historical items, and they do provide a wide array of options for classroom use. The fact that they are miniatures (which students must be reminded of) means they are easily moved from office to classroom and back again.

I ask students to consider the way the cup was made: the lack of a handle denotes a cup made in Asia, which in turn suggests the family can afford imported china. Then I pass the tea chest around the room. Students sometimes struggle with the more abstract concepts posed by mercantilism, but a wooden tea chest brings to life the idea that wood was harvested in North America, sent to Britain to be planed and shaped into a chest equipped with metal handles, and then shipped back to the colonies for purchase as a finished product. As background for these discussions, I recommend Rodris Roth’s article “Tea-Drinking in Eighteenth-Century America: Its Etiquette and Equipage,” which links the objects and the rituals connected with tea drinking in the British Empire in the mid-18th century.1

The 19th century provides the opportunity to use objects to talk about the transition from artisan to factory. Some of my favorite objects for this point are from the Industrial Revolution, whether a shuttle from the Lowell mills or a bobbin from Slater’s Mill in Pawtucket, Rhode Island. This point in the semester also provides opportunities for discussing the dangers of trying to interpret history with unknown or unidentified objects, as most students have now become ardent advocates of the advantages of studying history with period objects. And here is where the glove stretcher or another, equally unfamiliar, object—such as a deck prism from a 19th-century whaling vessel—enters my classroom. To help students with the process of identifying and interpreting the unknown object, I introduce a system for identifying objects loosely based on that of Jules Prown: examine and describe the object, consider the gender and social class of the people who possibly used it, and speculate about what the object was used for.2 Perhaps the most interesting part of this process is watching students become suddenly humbled by the fact that they have no idea what it is that they are holding. Toward the end, I begin giving clues; sometimes a student identifies the object, sometimes not. We finish by discussing what they’ve learned from the exercise and how these lessons can be applied to the written sources also used to study history in my classrooms.

Objects also play an important part in the evaluation of the students’ learning outcomes. I’ve developed a variety of strategies for using objects in exams that have proved both interesting and rewarding to grade, as they give students opportunities to develop their analytical and contextual skills.

Perhaps the best part of using objects in the classroom is seeing students respond to them. I sometimes forget the power they hold, not to mention the importance of regional connections. I grew up in New England, where bobbins are almost a dime a dozen in antiques stores; I was fascinated when, in a classroom in Utah, a student picked up the Slater’s Mill bobbin and looked at me with great delight. “This is so valuable,” he said. “And you’re letting me touch it!” I told him that I had purchased it for two dollars a few summers before. “No,” he said, “it’s not the money. It’s the real thing. This is from Slater’s Mills, where everything started.” Paying attention to what is ordinary and what is extraordinary for students is a necessary lesson for me as well. Sometimes students connect to what is familiar; other times it is the unusual that draws them.

We live during a time when the use of technology at schools, universities, and museums is growing. While educators need to stay current, it is also worth remembering that our students already live in highly advanced, technological worlds. A computer is familiar; a sugarloaf or glove stretcher is not. In order to awaken interest in history and to help students better understand how their own material worlds came to be, there are few better methods than looking to the technology of the past.

2. Jules Prown, “Mind in Matter: An Introduction to Material Culture Theory and Method,” in Material Life in Early America, 1600–1860.