The job crisis facing young American PhDs today has an analogue in at least one earlier historical period with which I’m familiar: the situation of newly minted lawyers and physicians in early-19th-century France. After the French Revolution abolished the guilds, regulation of recruitment ceased not only in the artisanal crafts and mercantile trades but also in the faculties of law and medicine. As the number of law and medical students soared, employment prospects correspondingly diminished. The situation was vividly evoked in Balzac’s 1840 novella Z. Marcas, which tells the story of two impecunious young men, recent graduates of the law and medical faculties of Paris, who share a tiny Latin Quarter garret in the late 1830s. The would-be lawyer, already disabused of whatever career ideals he might once have had, describes their plight as follows:

We thought only of amusing ourselves . . . . We could see no future in the two professions our parents had forced us to embrace. There are a hundred lawyers, a hundred physicians for every place. The crowd obstructs these two avenues . . . , which are really two arenas: one kills oneself there, one enters into combat not with steel or firearms but by intrigue and calumny, by horrible labors, by campaigns in the realm of the intellect as murderous as those in Italy were for the republican soldiers.

Apparently the urban fabric of Paris as set out in detail by Balzac—cheap restaurants, cafés, and theaters as well as an abundant street life and the accessibility of the Luxembourg Gardens—allows the narrator and his friend to lead an only mildly uncomfortable vie de bohème on a shoestring. For as the narrator explains their choices: “We ­preferred a thinker’s idleness to futile activity; we preferred nonchalance and pleasure to useless work that would have sapped our courage and worn out the liveliness of our intelligence. We analyzed the condition of society while laughing, smoking, and taking walks.” They arrive at a generational explanation of their predicament (“There are laws of fluctuation governing the generations”). The political regime, they believe, has sacrificed the vital talent and energy of “young people” to the “mediocrity” of the adult generation.1 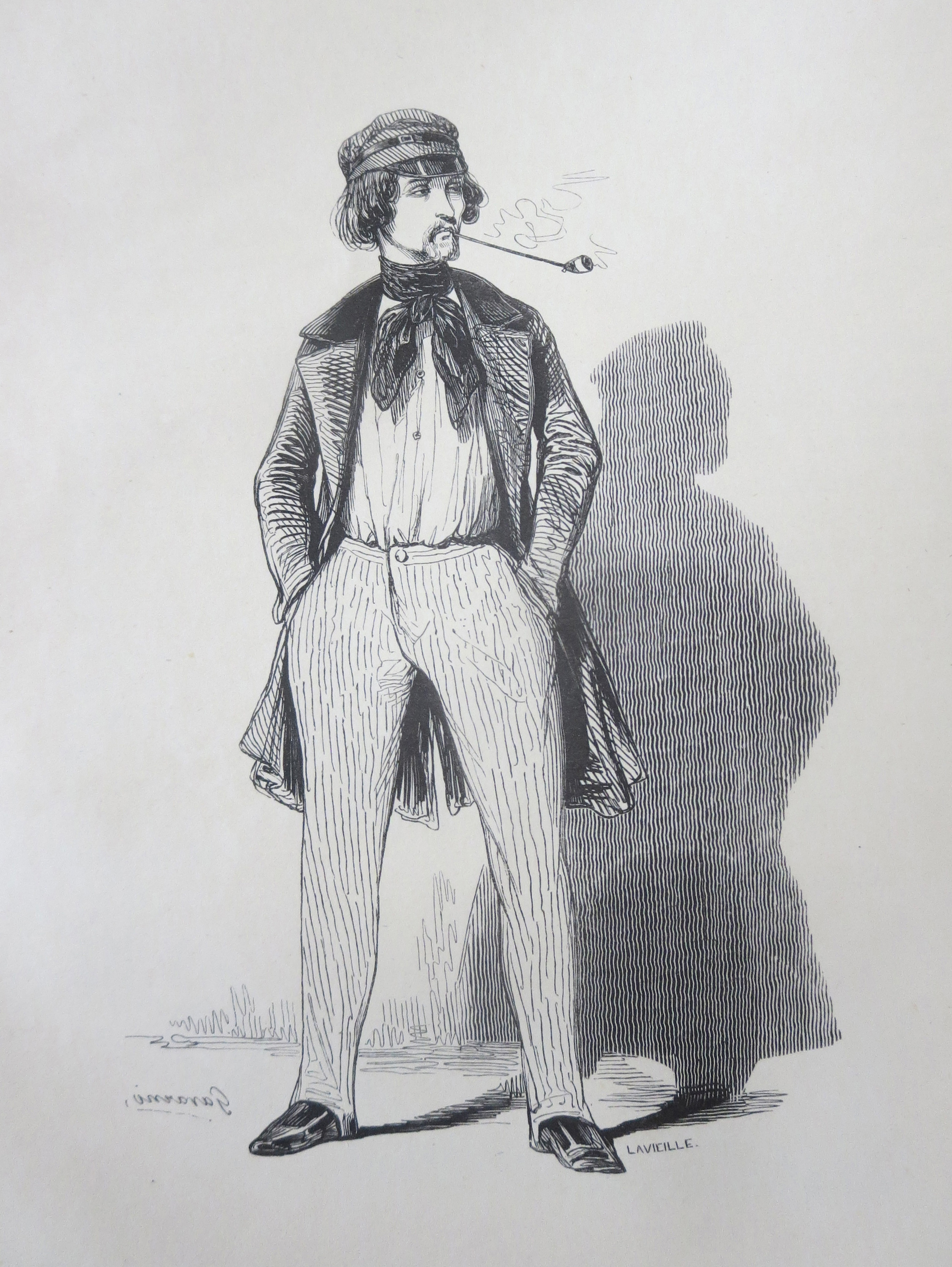 If a lot of this sounds familiar and seems roughly applicable to the state of affairs in the academic sector of the contemporary United States, the part about unemployed professionals opting for hedonism while disdainfully turning their backs on an unpropitious job market strikes a singularly ­discordant note. For one thing, early-21st-century American cities fail to provide the amenities that sustained the Parisian ­lifestyle of these early-19th-century Balzacian characters; for another, the countercultural ethos that marked the 1960s, and that bore a family resemblance to the Romantic attitudes Balzac was describing, departed our country long ago. What is most relevant to us today—and what interests me for purposes of this column—is not the way of life that Balzac’s two characters take up but the one they so deliberately reject. The fiercely competitive job market, the hundred (or more) applicants for every place, the “campaigns in the realm of the intellect as murderous as those in Italy were for the republican soldiers”—all this has willy-­nilly become the backdrop of graduate education in the United States today. By signing up for graduate school, our students implicitly sign up for an eventual engagement in this grim arena, and the specter of the struggle ahead cannot help but color their years of graduate education. What are the results?

In many cases, that hovering specter produces a condition of precocious professionalism that, while entirely justifiable from the student’s perspective, can also ­seriously undermine the educational process. By precocious professionalism I mean an attempt to ready oneself for competitive engagement—or at least to seem to have done so—as quickly as possible and, most importantly, by refusing oneself a period of exploration, risk-taking, and learning from mistakes. There is, of course, nothing intrinsically wrong with moving to one’s goal expeditiously, and the fact that the seemingly interminable careers of some graduate students have become the butt of popular jokes would seem to argue all the more forcefully that graduate students should, as a group, adopt an expeditious path. But in the making of scholars, the straight line connecting point A to point B may just not do the trick. In posing and answering ­historical questions, insight and inspiration often come from a bit of wandering, occasional impromptu detours, serendipity, and letting one’s attention and imagination roam. The straight-line approach can encourage a hasty specialization and a narrowing of sights that have long-term, negative effects on a young historian. Such mental contraction may have been what Balzac’s narrator was thinking of when he cited, as the reason he and his friend declined to enter the brutal professional arena of their day, their desire to protect the “liveliness of our intelligence.” Even if we view these two bohemians with a jaundiced eye and regard their shrinking back from “combat” as pure self-indulgence, we can see their point.

Thus the most common symptom of today’s precocious professionalism can be found in those first-year graduate students who want to write a seminar paper on some aspect of the same topic they examined in their senior essay in college and who, when urged to try their hand at something new, demur on the grounds of lack of expertise. Even with the safety net provided by the multiyear aid packages that many graduate students now receive, they feel that they cannot chance a misstep, that anything less than a polished written performance—preferably one that can be published as a journal article with minimal revision—will doom them from the outset. They voluntarily rein in their curiosity and curtail their sense of their own possibilities so as to appear competent, invulnerable professionals almost from the moment they enter our classrooms.

Such precocious professionalism is not, of course, an entirely new phenomenon. I remember a graduate student classmate back in the 1970s who expanded his senior thesis into his master’s essay and his master’s essay into his dissertation topic. I personally envied the obvious purposefulness and calm goal-direction of this classmate and regarded him as an unattainable role model. The denouement of his graduate career was thus particularly instructive: after spending a year abroad doing dissertation research, he realized he had lost all interest in his topic, and he abandoned history for law school. The seemingly prudent quest for security that this classmate exemplified has, however, become far more common today than it was several decades ago, and the continuing job crisis supplies it with an ever more powerful rationale.

Another symptom of precocious professionalism is the quest for a marketable niche. The afflicted students know where their intellectual interests naturally lie, but they distrust themselves. Maybe the European Enlightenment, or colonial North America, calls to them, but they’ve heard that most of the available jobs congregate in the post-1945 period, and they wonder if they just shouldn’t squeeze themselves into that slot.

Faced with such manifestations of precocious professionalism, we teachers of graduate students are caught between a rock and a hard place. The job crisis and its rigors are real. We want our students to be savvy and to go into their graduate training with their eyes fully open. We want them to entertain alternative careers and to keep a plan or two in reserve should things not turn out in academia as they and we hope. In our concern for their welfare, we may even become cheerleaders for precocious professionalism ourselves, invoking its reassuringly concrete criteria in our role as mentors and extending those criteria into our evaluations of the applications of prospective graduate students.

But still, it seems to me, there is no point in starting graduate school at all if students clip their intellectual wings at the outset and adopt as young scholars a utilitarian calculus suited for the business world. Better simply to choose a different career—and one, moreover, with a higher pay scale. A graduate education tailored to market considerations is a pale simulacrum of the thing itself. It is unlikely either to satisfy these students intellectually and emotionally or to lead them to the best scholarship of which they’re capable. We must ask our students to avoid precocious professionalism and instead to ­cultivate a kind of double vision: to be aware of the uncertainties of their academic futures but also to bracket that knowledge and live in the moment as graduate students. It’s a devilishly difficult performance to ask of them, but it’s probably the way to make the most of the devilishly difficult historical circumstances we’ve been handed.

Nor, of course, should we ask them to resist the pressures toward precocious professionalism on their own. Those pressures are systemic in academia right now, and as I mentioned earlier, even faculty members explicitly opposed to them feel their weight and sometimes, in pessimistic moods, succumb. Instead, we must be vocal on search committees and forceful in conversations with deans about distinguishing the supposed signs of scholarly prowess (time to degree, number of publications) from the intrinsic quality of a young scholar’s work. Preserving a space for authentic graduate education in a time of crisis is, in other words, a responsibility we all share. In urging our students away from precocious professionalism, we must do everything in our power to ensure that we are offering them sound career advice.