News and Views in April’s Perspectives on History

In the April Perspectives on History: precocious professionalism, Redcoats on your TV, teaching with a tea set, a national treasure at the brink, what’s in the April AHR, tuning history in Utah, historical pics on Twitter, a new attendance policy, and more. 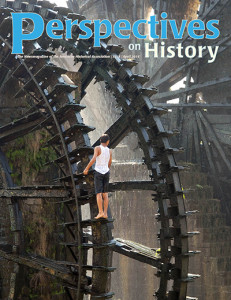 The latest issue of Perspectives, now online and in the mail, features several conversation-starting pieces including a Viewpoints essay on a recent survey of historians regarding their use of the National Archives, conducted by the Society for Historians of American Foreign Relations. The survey found a deep love for this “national treasure,” but also picked up on an abiding sense of frustration among researchers.

Also in this issue, Lee White, executive director of the National Coalition for History, announces the formation of the Congressional History Caucus, a new group in Congress and a fresh opportunity to bring history into public policy. And in “Tuning History in Utah,” Daniel M. McInerney describes how groups devoted to advancing history and the humanities turned adversaries and skeptics into partners.

Our Teaching section features Jonathan Ablard’s account of how he historicized the dull administrative task of taking attendance, and Abby Chandler’s reflections on the use of glove stretchers, tea sets, sugarloaves, and bobbins in the US history survey.

On April 6, AMC will premiere Turn, a new historical drama set during the Revolutionary War. Carolyn Eastman attended a press event in Richmond, Virginia, where the show is filmed, and watched an advance copy of the pilot. In Perspectives, she offers a historian’s take on this new show, which has been given a big publicity push by AMC.

Shatha Almutawa, Perspectives’ new associate editor, has hit the ground running with two news stories in the April issue. Her account of preservation efforts in Arab Spring countries discusses the deep connection residents of those countries form to sites and objects, and what is at stake in saving them from destruction. Next, she reports on oral history projects on homelessness—and how historians navigate a surprisingly complex terrain as they document this issue.

There’s much more in the April issue, available now in a web version to all, and in a PDF version for AHA members.