Big Changes in Store for the Future Management of Government Records

On November 28, 2011, President Obama signed the Presidential Memorandum – Managing Government Records. In sum, this directive requires “to the fullest extent possible” that individual federal agencies eliminate paper-based records and move to electronic recordkeeping, without regard to security classification. The move was part of the Obama Administration’s much larger goal to “develop a 21st-century framework for the management of Government records.” 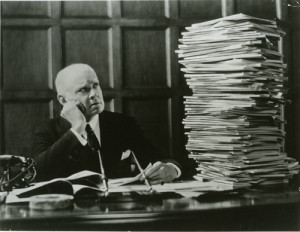 This directive identified specific actions to be taken by the National Archives and Records Administration (NARA) to support the process, and one of the first steps to transition to electronic recordkeeping was organizing an Electronic Records Management (ERM) Automation Working Group (staffed by agency records and IT staff throughout the federal government) to develop a comprehensive plan for the directive. The group recently produced an “Automated Electronic Records Management Report and Plan,” a “living document” as Arian Ravanbakhsh (of the Office of the Chief Records Officer at NARA) described, as an outline that can be fleshed out with the aid of public comment and discussion.

ERM is an incredibly complex issue that can be overwhelming and intimidating for nonexperts. At the heart of this issue, however, is something that is transformative: a whole new selection process to determine what federal records are valuable, and what will be destroyed. According to Meg Phillips, external affairs liaison for NARA, this new selection process means moving from a system where human beings make the decision about archiving or destroying a document, to an automated system that relies on a set of rules and algorithms to make those decisions.

For historians, the results of automated records management are significant. According to Phillips, “We do not think current methods of record keeping in agencies are actually working for managing and saving all the records needed for future government accountability and historical research. The most extreme way of stating this is the ‘digital dark age’ idea—historians of the future may not have the records they need to understand our age because real government work is done electronically but the systems for capturing and managing records were designed for paper. The archives may just not be getting critically important stuff.”

Questions for historians to consider when reading this document may include:

In the blog post describing the draft records management plan, NARA invited the public to comment by April 25, 2014. Comments can be made on the blog or e-mailed to PRMD@nara.gov.